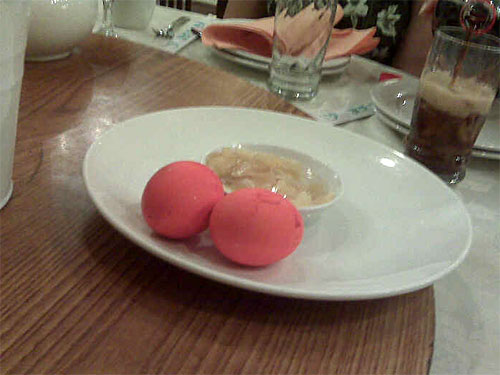 In case you’re wondering, the Red Egg and Ginger Party celebrates a baby’s first month of being alive. The event, as shown above in a photo taken from my cell, begins with the serving of red eggs and ginger. There was a lot of food. The waiters never smiled or in any way implied that they were okay with being there, which I understand is also traditional. There was no dancing and no costumes and, contrary to what About.com might suggest, no magician. Just food. Here’s what I recall (in order of appearance except where I screwed up in remembering):

Big thanks to Fancy J for indulging me with the invite (and congrats on the baby, he looks like a winner — no joke). The party was at a well-regarded (Chinese) restaurant in Monterey Park, the home of well-regarded Chinese restaurants in the greater Los Angeles area. Again, no joke. One of our discussions over dinner was my preference for Americanized Chinese food over Sinoficated Chinese food. I suck that way, but at least I can admit it. I wouldn’t mind a $4.95 beef-and-broccoli lunch special at a Korean-owned, strip-mall-located restaurant *right now*, come to think of it.

So now that I’ve finally gotten into one of these exclusive Chinese dinner parties, I can stop cozying up to random East Asians just to try and get invites. That’s a weight off, I’ll tell you what.