DIY TV Stand Part 3: The Building of the Frame

With that, then, it’s time to get going on building the framework. The vertical supports of this TV stand come in the form of four 2×2 boards. To these, I’m going to attach an apron that goes along the bottom of the TV stand, and then another, uh, apron that goes along the top (but not along the top-front). They should both help stabilize the beast, plus the bottom apron is going to be the support for the bottom shelf and the top apron is going to give me something to attach the top of the TV stand onto.

The pieces are all cut already. Also, I had to buy more wood since I neglected to buy what I needed for the top apron. This required an additional 4-foot long 1×3 and two more 2-foot long 1x3s. And in case you’re wondering, buying the two 2-footers was cheaper than buying one more 4-footer. I blame Bush.

So with that, time to stick the apron pieces to the legs. I believe in redundant systems, so I’m going to be using both wood glue and wood screws. First up: gluing the apron parts to the legs. I decided to use the pipe clamps for this since I hadn’t yet bought the quick-grip clamps… 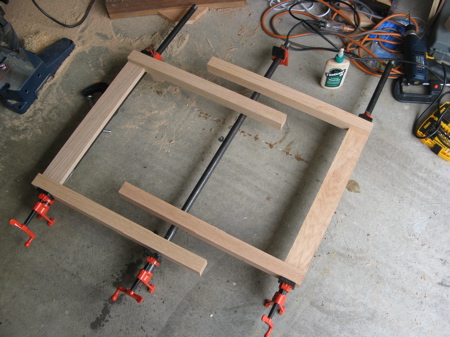 Once these were glued (for some reason I let these dry overnight — probably for the sake of giving the glue a chance to actually do something), I went ahead and got to work with screwing in the redundant screws. Here are the screws I’m using: 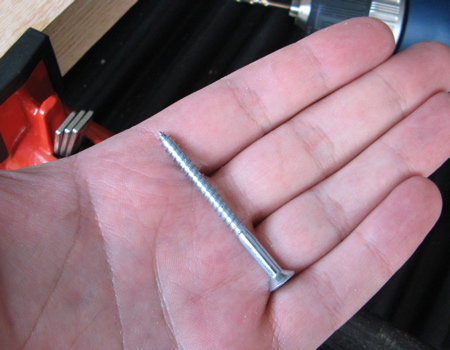 These are 2-inch #8 wood screws. I recommend you buy Torx wood screws, they need to be two inches since they have to get through 1 1/2 inches of the 2×2 uprights and then still have a little bit of hold in the 1x3s thereafter. The screw diameter (#8) is based on the largest diameter that I thought wouldn’t split the 1x3s (so far, so good).

Getting these screws in requires some thinking about what you’re doing. If you look at that screw up above there, you see how the screw gets wider at its head? This red oak I’m using does *not* accommodate that extra girth at the head. If you try to screw harder to get the thing flush with the wood, the screw will break and you’ll know which side of the TV stand is going to be facing the wall (which is kind of comforting to know, in a way).

I did a lot of test screwings on scrap trying to figure out how to get these suckers into the wood. What I determined was that I needed to drill twice for each pilot hole. The first time was with a 7/32-inch drill bit — this part of the hole only needs to be deep enough for that widening head to sink into: 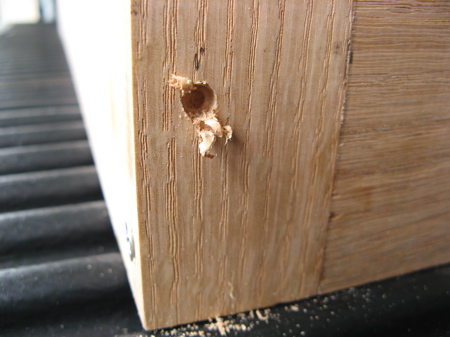 Once those were done, I went ahead and drilled the rest of the pilot hole using a 5/32-inch bit (drilling two inches deep). It’s important to do the 7/32-inch part first — if you go the other way around and do the deep pilot hole first, then the bigger drill bit gets confused and angry when you try and baby it into the hole for only an eighth of an inch or whatever. At least, that’s what *my* drill does. (BTW, these were the drill bit sizes that yielded optimal results in the testing — smaller bits resulted in broken screws and test-frustration.)

I’m only putting one screw in per upright-board combination. I’m assuming the glue will do *something* here and I don’t want to press my luck drilling into the skinny end of the 1x3s too many times — they’re only 3/4-inch thick and the #8 screws don’t leave much clearance on either side. 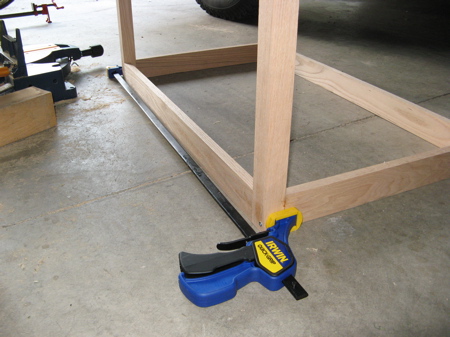 The quick-grip clamps are pretty handy. They don’t take much work to use, they don’t have to be on the ground to work, and while they’re a little expensive (I think the three-footer was $35 or so), they… I dunno. They’re a little expensive. Between them and the pipe clamps, I have to think that the pipe clamps deliver more pressure. I could be way off on that, but for me it feels better to be able to tighten the clamp myself by rotating the pipe clamp handle than it does to push on this plastic trigger and *assume* it’s doing something. But so far, the quick-grip clamped gluings have done as well as the pipe clamp clamped situations. When my TV falls through the stand, though, you’ll know which one I’m going to blame.

Then once the long sides were glued, I went ahead and did the same drill-and-screw treatment to them as well. Then, once that was over, I put the “top apron” on, which was only three-fourths the work since I wasn’t putting an apron piece on the front of the TV stand. And with that, I got the makings of a real live box. Just to tease myself, I threw the top piece on top of it to get a glimpse of how it’s going to look in the end. (You’ll have to trust me: there’s a top apron underneath the top panel shown below.) 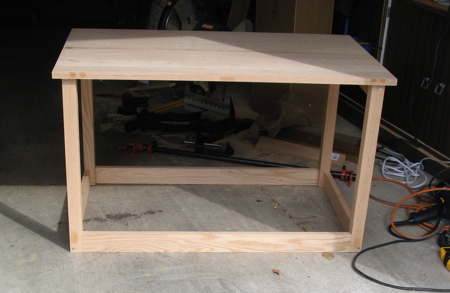 So close. So close. Not really.

Bad news at the hardware store today, though — they’re out of stock on the 4-foot 1x12s I need to build the two shelves. I’ll check back later in the week, but those shelves need serious 24-hour clamping times and are thus long-lead items (especially given that I only have three pipe clamps and will have to do one shelf at a time). But hopefully the trucks start rolling in tomorrow (to Lowe’s and nowhere else — I hate getting stuck behind ’em) and I can pick up my new favorite boards during the week so they can be glued by the weekend and I can get to sanding, painting, and final assembly. Maybe.