Went to New York in June for a conference. Except that I flew out Saturday and the conference didn’t start till Tuesday, so I was sort of paying for my accommodations for a couple nights and, given how ridiculous that is in NYC, found the cheapest clean non-hostel in the city (per its reputation), Hotel 17. I think this photo says pretty much everything. 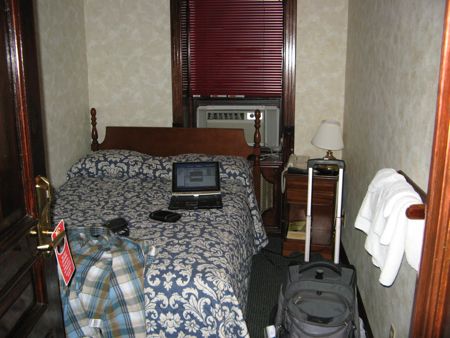 This is the entire room. There’s a microscopic TV and safe behind the door. Just off the right side of the frame is a sink without enough space around it to put your shave kit. The bathroom is down the hall (and shared by everyone on the floor).

Of course, I knew all that going in, which made it a reasonable experience (actually I was pretty surprised the room was *this* small). Plus, no, I really didn’t go to NYC for the sake of hanging out in the hotel room. Sure, it would’ve been nice to have somewhere to hang my clothes (?!), but, really, this room cost $109/night and to get any sort of material upgrade over it (say, to have a private bathroom) would’ve been another $50/night. For $50, I can use a communal bathroom.

The hotel was clean. The a/c worked. The neighborhood was pretty cool — just a couple blocks east of Union Square, which is one of my favorite parts of the city and which is one of the most useful subway stops in Manhattan (of course, I’d say that about any stop that has the 4 and 5 express *and* the R and W lines running through it). Lot of worthwhile restaurants nearby, about 15 blocks to the Empire State Building, about a 10 or 15 minute walk to Washington Square and the Village. Hotel staff were, you know, normal (in a positive, uneventful way). And I guess the most impressive thing about the hotel was how quiet the place was. Having lived in the city, I just expect to be woken up by backing-up garbage trucks three times a night (and by sirens another couple times a night). Here: didn’t hear a thing, slept right on through. That’s pretty impressive for me, microscopic room or no.

Conclusion: so long as you’re okay with the bathroom and not expecting to get anything done actually *inside* the hotel room, it’s recommendable.