Trip to Yankee Stadium (Before It Was Too Late)

All the convenience of a stadium built in 1923 with all the charm of one built in 1976. The building itself seemed unfortunate.

Was there back in June and, yes, am just now getting around to saying anything about it. Watched the Yankees play the Reds. I gave up Yankee-hating a few years ago and it wasn’t hard to root for them in this game. Andy Pettitte was great (until the rain delay took him out of the game). 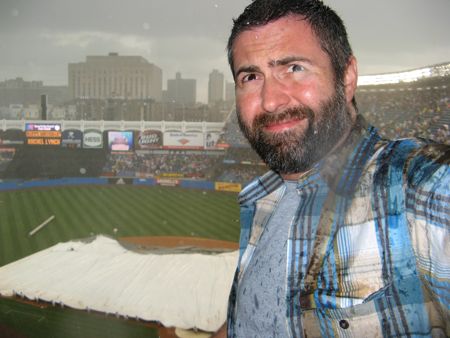 This never happened at the Kingdome. For as bad as it looks — and New York rain is amazing, never got anything like that in Seattle — the rain only lasted about 15 minutes, although the delay ended up running for an hour or so with all the tarp unrolling and re-rolling and field prep. It was interesting watching a game get played out with the anticipation that it might only go five innings (IIRC, the Reds brought their infield in while down one in the bottom of the fourth), even if it ended up going nine.

The stadium itself — it’s hard to say so, but I don’t think it’ll be much of a loss when they knock it down at the end of the season. The concourses are too narrow, there aren’t nearly enough entrances, concession stands, or bathrooms: classic hallmarks of its original build date. But then it was altogether too clear what happened to it in the 1976 renovation — the whole thing feels like concrete and bad signage. In style and finish, it really, honest, felt like the Kingdome (and nothing like Wrigley or even Fenway).

Seems like they’d have been better off not re-building. The LA Colosseum has tunnels that are less than six feet high, bizarre sight-lines, etc., but it at least makes sense. The place feels like its origins and you can still feel like you’re in a historic place. The re-built Yankee Stadium looks and feels like something only a Soviet could love. I feel like I saw similar in East Germany.

The impressive part of the game was the fans. And not just the guy sitting next to me who started throwing up in the first inning (he and his friend left immediately with many apologies and we felt bad for them). The people at the game actually knew baseball well, they knew the Yankees down through the farm system, and they didn’t do stupid things like cheer because they didn’t realize that a fly ball wasn’t going to make it out of the stadium. Even if I’d come in with a grudge against the Yankees, the fan quality would’ve made it a hard grudge to maintain. Quite a difference between Yankee fans and, say, Angels fans (ugh — with apologies to Joe, Elissa, and probably some other people).