Was in South El Monte today, which is bothersome in that, if it’s going to be “El Monte”, then the southern version should be El Monte del Sur. Or, if we’re going to anglicize everything, South Elmont.

OTOH, that was one of the ten worst injustices I noticed today, so, by and large: pretty good day. 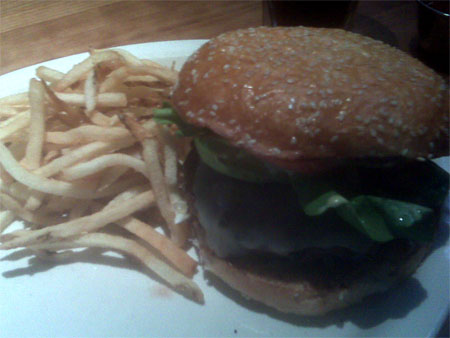 Burger was $15 on the menu and came with fries. Burger was big. Asked for Medium-Rare and it came Medium-Rare, without having to sign any sort of release form prior to burger arrival. In this case, “California” means: arugula, provolone, tomato, red onion, honey-mustard, slab of avocado. Was somewhat pretentious, but only in the romantic way that California is sometimes pretentious.