So I finally knocked off the other SoCal location on the 20 must-eat hamburgers list. 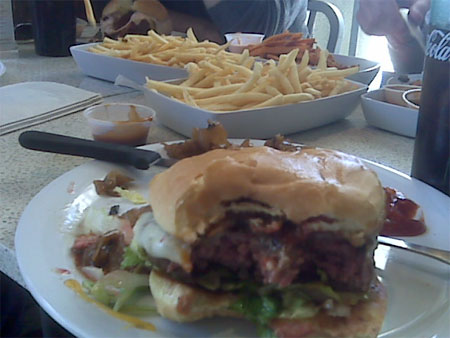 To The Counter’s infinite credit: a little on the rare side.

It’s a tough one to evaluate. The meat quality was spectacular. I opted for the two-thirds-pound patty and asked for medium-rare — that worked out great. The hard part, though, is that it’s up to you, the restaurant-goer, to figure out what you want on the burger. Anyway, maybe I just played it too safe by opting for a barbecue-bacon situation that might be better left to a place like Chili’s. So the accoutrements were merely okay and the bun had pretty much evaporated by the time I was half-way done.

I think Joe (to whom I owe mad props for facilitating the lunch) pretty well loved his. No idea what he got on it, though. Probably Russian dressing and “Danish Blue Cheese” (sic). It also struck me as hard to imagine that the burger at The Counter in Santa Monica would’ve been noticeably different from the burger at The Counter in Irvine. I’ll have to try the Irvine location one day. And don’t get me wrong, mine was a very good burger, no doubt. But I liked the California Burger at Houston’s better.