Somehow I think this is useful to consider: 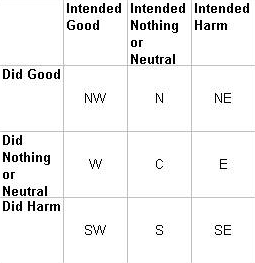 In practice, though, I think the opposite often occurs and people start valuing intent more than outcome. And then they do things like trying to spin a bad outcome as positive, because surely a well-meaning person’s action must result in something positive. Similarly, a positive outcome from a bad intent gets spun into something negative or is said to not have actually come from the mal-intender.

Anyway. I think the top row should always be preferred with NW > N > NE. On the other two rows, I’m not so sure. I think C might be better than W, if only because it was intended and therefore should’ve been expected. So maybe C > W > E. Similarly in the bottom row — I dunno. I guess I’d prefer it almost always if the person *meant* well, even if the outcome is the same as if the person had meant harm. At least someone who means well might have some other redeemable qualities outside the event in question.

I guess the other question is whether intent has any importance whatsoever. A person whose outcomes are always positive should possibly always be labeled as “good” and any claims of that person to have had bad intentions more a reflection of the person’s own lack of self-awareness.