Went to the Planes of Fame Air Show in Chino on Saturday. This was the best photo I got: 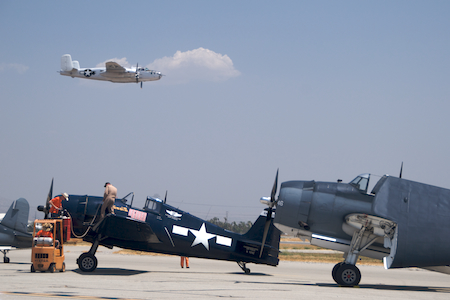 A (strike)B-24 Liberator(/strike) B-25 Mitchell comes in for a low pass while some guys work on an F6F Hellcat that claims to have shot down 29 Japanese planes despite being part of something called the "Commemorative Air Force".

Took 300 photos, most of which were awful. I blame the haze. And the number of people that were there. And my unwillingness to go stand in front of all the people for an unobstructed view. Plus, really, what kind of composition actually works for planes flying alone against a hazy-blue sky? Nosuch.

Air Show was at the Chino Airport, which is also the home to the “Planes of Fame Museum” I visited a while back. Was hot out there — 90 maybe. Got good and burned on my neck, most importantly.

The show was mostly old planes, mostly from World War II, although there was a brief Korea showcase with an F-86 and a MiG 15 chasing each other around. Also had an A-10 Thunderbolt, which is usually pretty fun to watch (IMHO, slow flying trumps everything at an air show), and a C-17, which isn’t necessarily fun to watch. And the tri-tip barbecue sandwich was way better than I expected I’d find at an air show.

Here’s a photo of F8F Bearcats flying in formation, in case you care: 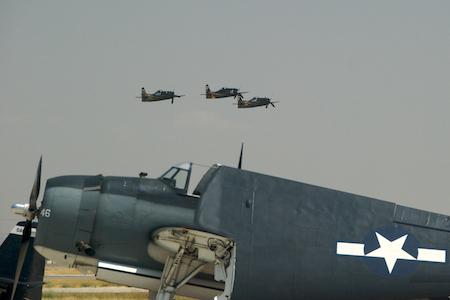 Three aerobatic F8F Bearcats fly in formation, shaming one of their less well-heeled bretheren into folding up its wings.

So I really didn’t rock it on the photography. Many life-lessons were learned, however. And the old planes looked and sounded cool.