Part of Pittsburgh, or Pgh to the abbreviators. I dunno — seems like Pit or Pbg would be a better shorthand. Can’t fight tradition, though, I guess. And DYK, the name of the city was spelled without an “h”  for 21 years at the turn of the 20th century for some reason.

Government overreach. That was the reason. Not kidding.

And one day I’ll go somewhere with (one of) my real camera(s) again. Just that my point-and-shoot has to go back to the factory (it’s in an envelope, has been there for a week now, on my desk) and the DSLR is freakin’ huge, which matters when it comes to not checking luggage. And having to bring a parka. So: cell phone photos.

Got back from The Pitt on Saturday night, was there for about 44 hours total, during which time it never got over 20 degrees. Everyone there apologized for the weather, but honestly it’s kind of cool to have a good reason to wear said parka for once and anyway, clear skies and 15 degrees breaks up the monotony of overcast and 65 in a welcome manner. Seriously. For me.

I’d rather have clear skies than warm temperatures anyway. 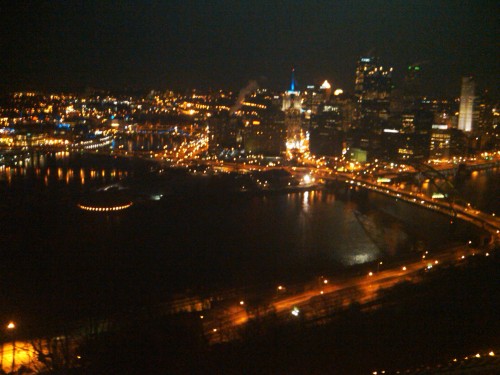 Pittsburgh, at night, from the top of Washington Hill.

So, surprisingly, not quite enough light for the ol’ cell phone on that one. OTOH, it was a great view — you can see a few of the city’s bridges down there and the confluence of the rivers (Allegheny and Monongahela). Went to a restaurant very close to this location with the exact same view, which was pretty cool. 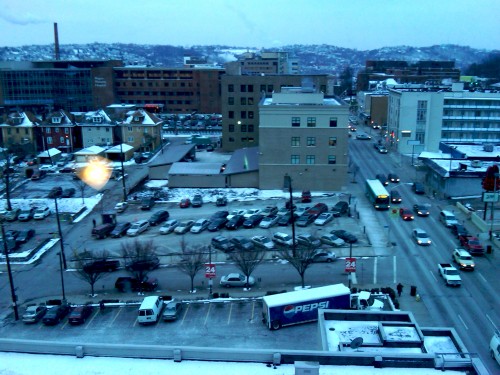 View from Room 615 at the Wyndham Hotel.

So you can kind of see some Pittsburgh topography in that one also. And some snow, and Forbes Street, which is a main thoroughfare in Oakland, the part of town where Pitt and Carnegie-Mellon are. The topography in Pittsburgh makes it an interesting place — hills and rivers and tunnels and bridges break up the neighborhoods so it’s not like most cities where it’s just a big old paved place with buildings on top. 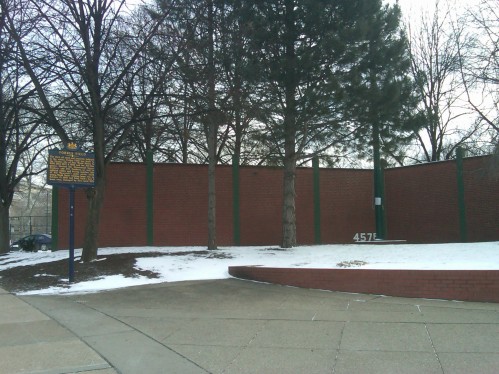 Center field wall of the former Forbes Field. The business school is now located where the right field grandstand was.

The Pirates played here until Three Rivers was built. This is where they won the World Series in 1960 with the Bill Mazeroski home run against the Yankees and all that. It’s all now incorporated into Pitt’s campus. 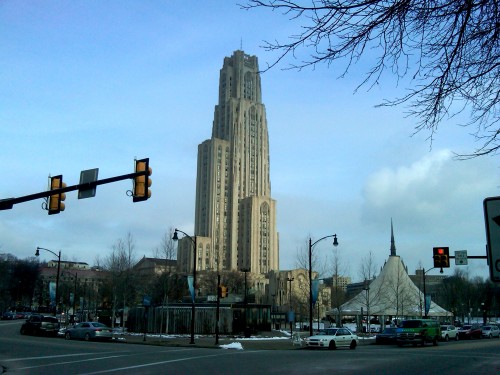 The Cathedral of Learning on Pitt campus.

It’s the second tallest higher-education building in the world! And for some reason it’s in a neo-gothic style. And the inside looks like Hogwarts. Some sort of depression-era make-work project. Kind of seems like they could’ve come up with a better name for it. IMHO. 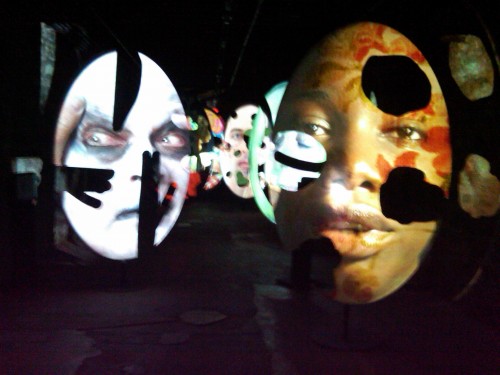 Installation art at the Mattress Factory museum. The faces talk to you.

That one was a little disconcerting. Installation art is odd stuff, but at least it gives the viewer something to do (e.g., “slowly walk toward the gray rectangle”, “sit in utter darkness for fifteen minutes”). 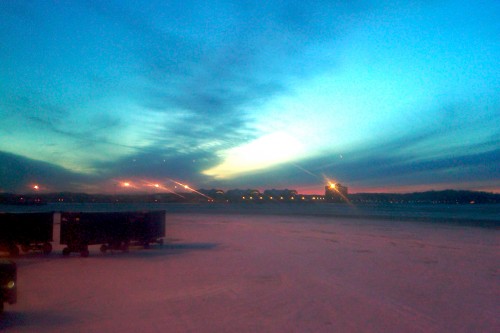 Tarmac at sunset with baggage cart.

Might’ve been good with a real camera and tripod is all.

It’s an interesting, old town. I mean, you feel how old it is everywhere you go — like the “incline” that takes you to the top of Mt. Washington is the one that steelworkers were using to get down to work on the river back in… eh, some year that was a long time ago. It’s kind of the opposite of New York where every building gets torn down and re-built every fifty years (seemingly). It also feels like an odd combination of cramped and over-built. The streets were all made for horse-drawn buggies, so parking and driving is tight — but there aren’t that many people driving, so you never feel trapped. Might have something to do with the population declines over the last three or four decades, but it’s an odd combination.