The Kitchen Must Die!

The cat urine smells bad, but it doesn’t trip me out to think about it. The crap that got left on the kitchen counter, though, that kind of trips me out. I don’t think I took a picture of it though as such. 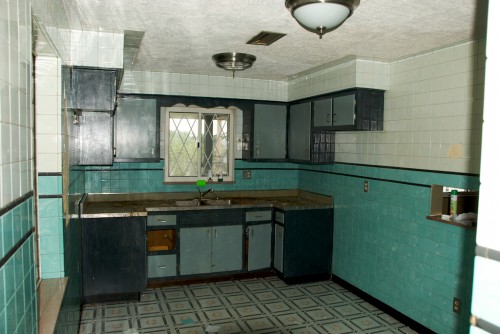 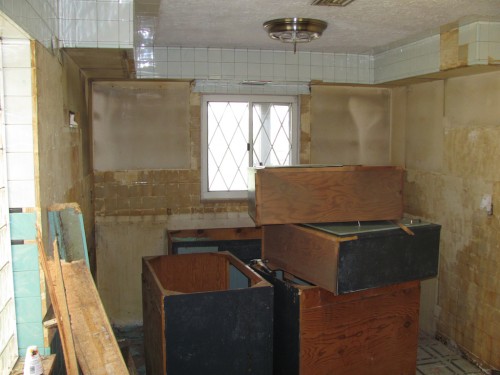 The one cabinet where the sink used to be is still attached to the wall. I’m probably just going to obliterate it in order to get it out of there — the pipes, you see. The pipes go through it, you see. So, you see, you can’t just pull it off. I’m guessing there’s some magical, easy way to get it off of there, if only I knew the secret, but fwiw I’ll probably kind of enjoy hacking into it with my hammer and pry bar.

Taking the tiles off the wall has been great. I didn’t get all that done today, btw. And I’m not done. The tiles are no problem, truthfully. The glue that holds them on? Sucks. 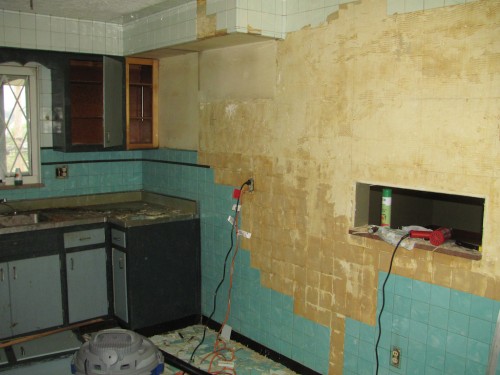 I’m really trying to show off the tile glue, but check out that pass through — so convenient: the cook can pass stuff into the living room without anyone having to see what she looks like.

For some reason the person who did the tiles on the lower 4 1/2 feet of the wall used a ton of glue. Whoever did the top half was considerably more considerate. You can kind of see that in the photo (top half clean, bottom half problematic). Someone online suggested a heat guy as a simple way to get the stuff to just fall right off the wall. I’m starting to realize that people who post to online forums aren’t always right. Realize again, I mean. Just like someone else on some other forum said to never try to take wall cupboards down by yourself. I did it by myself and I’m really not that big a deal. Apparently it’s possible.

Hadn’t ever had to detach a sink before. It turns out that, when it’s the right thing and you use it, WD-40 seems to do magic.

Back to the tiles for those of you still, like, reading. They were plastic. There, that was it.

Well also: I’m using mostly a 2-inch chisel on the tiles and glue. The stuff about the heat gun — the glue definitely doesn’t just fall off under the heat, at least not *my* glue. But it does sort of soften it and it might result in fewer divots in the plaster. I’m still kind of luke warm on the heat gun (har!). We’ll see what tomorrow brings. 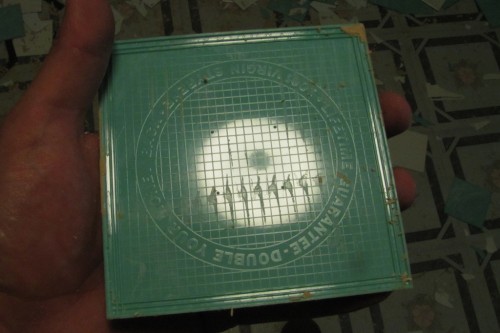 Not sure which of these three statements is the weirdest.

And does the double-money-back guarantee apply to tiles accidentally removed by ramming a 2-inch chisel into their sides? And I’m pretty sure the “100% Virgin Styrene” is the weirdest of the three. They were on these walls for 52 years — that’s a pretty good duty cycle for a square piece of plastic. Well done, guys, well done.