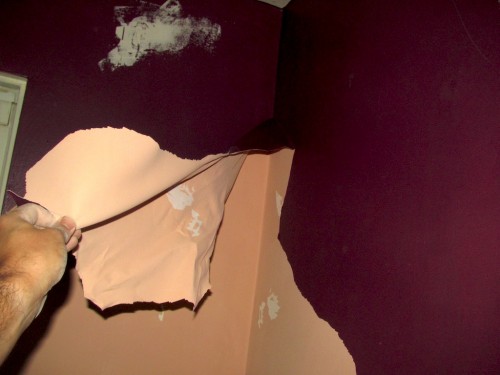 Because the cat urine stench alone wasn’t enough to peel paint off the walls. 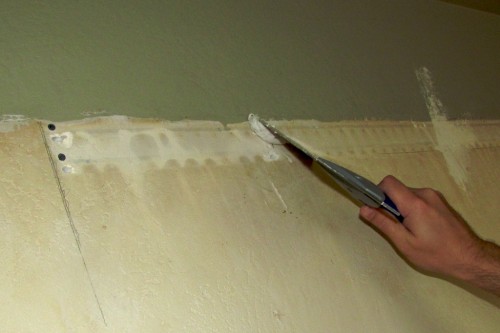 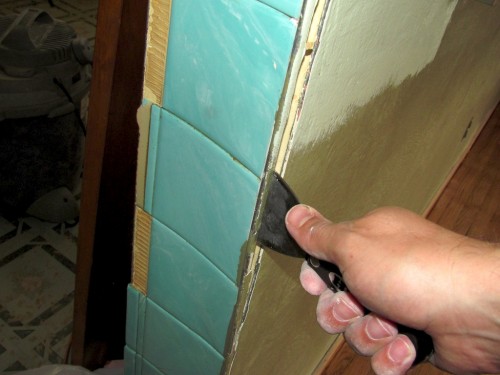 It’s a metal thing nailed into the drywall that kept the tiles in. 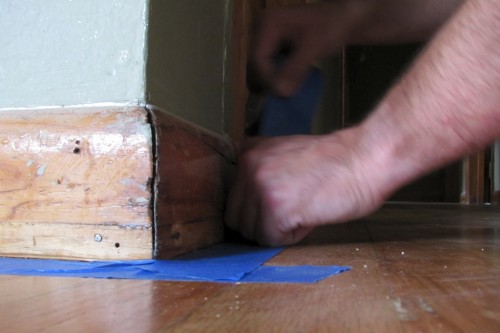 Hadn’t realized my baseboards were this ugly. 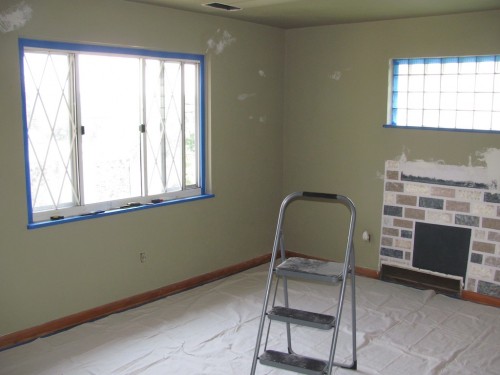 The dropping of cloth is complete.

Lacks drama. Not edgy enough. It’s 7:12 in the morning right now. There was some other stuff not pictured. Like that one glass brick window had a couple of wood things screwed into the window box that didn’t want to come out because the screws’ heads were stripped. Had to pull them off their screws and then unscrew them with pliers. Now *that* was drama.

Not really. It was pretty normal. I’m just glad I didn’t put another gash in the drywall.

Speaking of gashes, there was a pretty good-sized hole in the wall above the fake fireplace. I tried putting one of those pre-fabricated patches on it, but the metal thing on the patch was really thick and made the patch too obvious. So I pulled it off and just put drywall tape over the hole and mudded over that drywall tape. I’m guessing it’s less likely to stand the test of time this way, but it definitely looks better. Worst case, I have to re-patch it and re-paint it some time in the future, but so long as that future date is after Labor Day, that’ll be fine. Right now I just want to get stuff done and move on and in the meantime hopefully none of my house guests decide to probe the living room walls for soft spots.

The paint in the one bedroom and in the hallway came off in sheets as pictured. Kind of disturbing. And once that paint was off, the wall behind it smelled like cigarette smoke.

I need to get some window coverings so I don’t have to wake up at sunrise every morning.

PS, WIll eventually do a floor re-finishing post-mortem, but all the “before” photos are on the laptop and the laptop is in a place called “Cranberry Township” right now. It sounds like a place where the street signs are slathered in gumdrops, but it’s not. It’s just a place. Might be a few days still for the post-mortem though.