Safety Razor vs. Normal Razor: A Comparison (and Review Sort Of)

A few months ago I went to Target to buy blades for my Gilette Fusion electro-manual razor only to realize that an 8-pack cost $32. Holy carp: that’s ridiculous. I came home bladeless yet determined to find some way to get over on the man. Going to Amazon showed that blades could be had somewhat cheaper, but also reminded that there’s this whole other thing called “safety razors”.

It turns out there’s a whole online community dedicated to safety razors. On the one hand of course there is, but on the other hand, it’s kind of odd just how active a community dedicated to safety razors can possibly be. This degree of interest was worrying, but the site (badgerandblade.com) also provided a lot of info about the advantages of safety razor shaving and how to get started in acquiring the rare skill of using one without inadvertently slitting your own throat. (Some of the posters there make it out to be much harder than it actually is.)

It turns out that using a safety razor is considerably more economical than using a “normal” one. The table below sort of shows that (it assumes that the average man uses two blades a month; using more blades speeds up the break-even, using fewer slows it down).

(Prices taken from Amazon on July 24, 2011; lowest price for each product taken. Blade packs were chosen by lowest price per blade regardless of quantity (safety razor blade price applies to 7 AM or Shark blades sold in packs of 100).)

That table’s a little deceptive in that I, like most people, already owned another razor. In that sense, you kind of should deduct the initial cost of the razor for the normal razor comparison subject since it’s a sunk cost. But still — even with that, the break-even versus the Gillette Fusion (which I owned) takes less than a year. Also, unlike a “normal razor”, you could conceivably get reasonable value back for a used safety razor via E-Bay. A good safety razor is built to stand the test of time (I’ve read); a normal razor might last you a decade or more, but even then you’re not likely to hand it down to your grandkids. I’m not saying you’d hand down your safety razor (that seems weird), just that the likelihood would be higher.

The table comparison is also a little deceptive in that, if you follow the advice of the Blade & Badger community, you can’t just use normal shaving cream in a can; you have to use a badger-hair brush and some sort of soap or tub-based cream. Also according to them, you have to buy some sort of after shave, specifically some sort of European after shave. As such, and in order to give the safety razor an ideal test, I followed the entusiasts’ advice and bought: 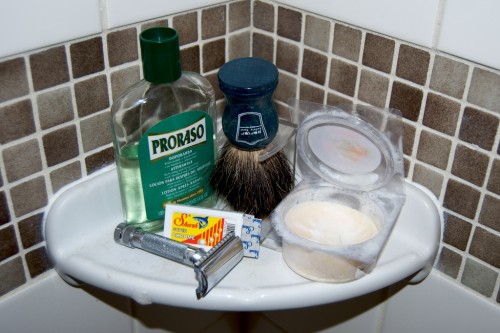 All total, then, the start-up cost for this experiment was $74.25. (As it turns out, I don’t think anything other than the razor and blades were required.) I’ve been using the set-up for a couple months now. Here, then, are my findings:

In summary, then, I highly recommend the safety razor approach. It shaves closer, does not appear to be any more difficult than using a normal blade, and costs significantly less than using a normal razor system. If any of the esoteric benefits are a plus for you, then so much the better. I’m guessing that if the tide ever turned and a majority of guys started using safety razors then the Gillettes and Schicks of the world would be left no alternative but to lobby congress into making them illegal. Until then, though, this seems like a market inefficiency that everyone might want to exploit.

PS, Plus I’m guessing that about 75% of what you’re paying for with the Gillette/Schick systems is marketing costs. Merkur and Col. Conk don’t really have that kind of overhead with which they need to saddle customers.