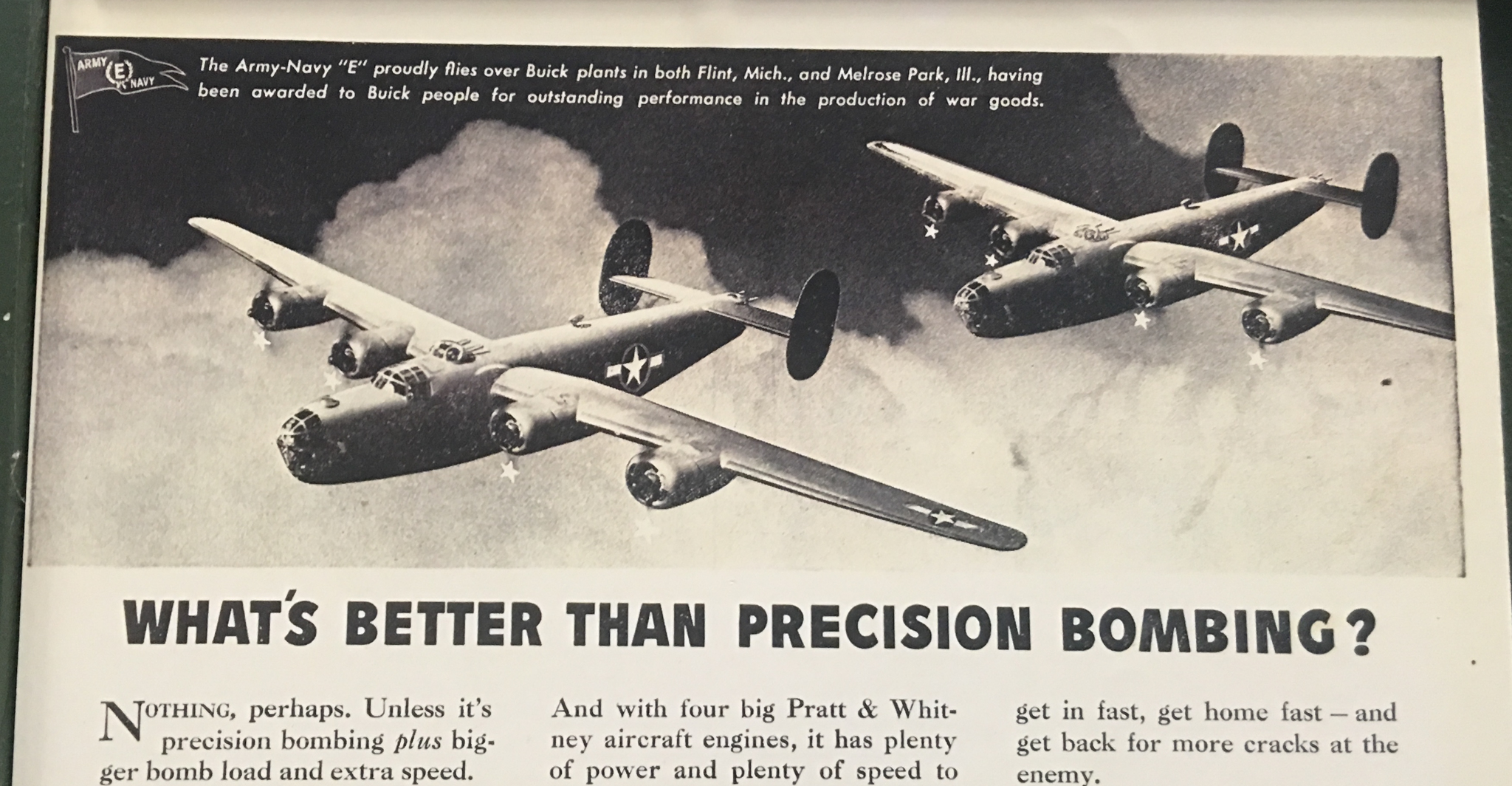 What I Did on My Winter Vacation, Part I: Arizona

Now that I’ve accepted a new job starting next summer, it’s my stated goal to minimize the amount of time I spend in Oklahoma. Sorry, Oklahoma. To that end, though, I spent most of the winter break in Other States.

First up: I’m not sure which state I should list as first. I got in my Jeep in Oklahoma at 6:00 in the morning on 12/23. It was unusually rainy. It turns out that there are no lane markings on I-40 heading west out of OKC because, I dunno, Oklahoma gonna Oklahoma. Seemed dangerous. And then the first non-Oklahoma state I hit was Texas. 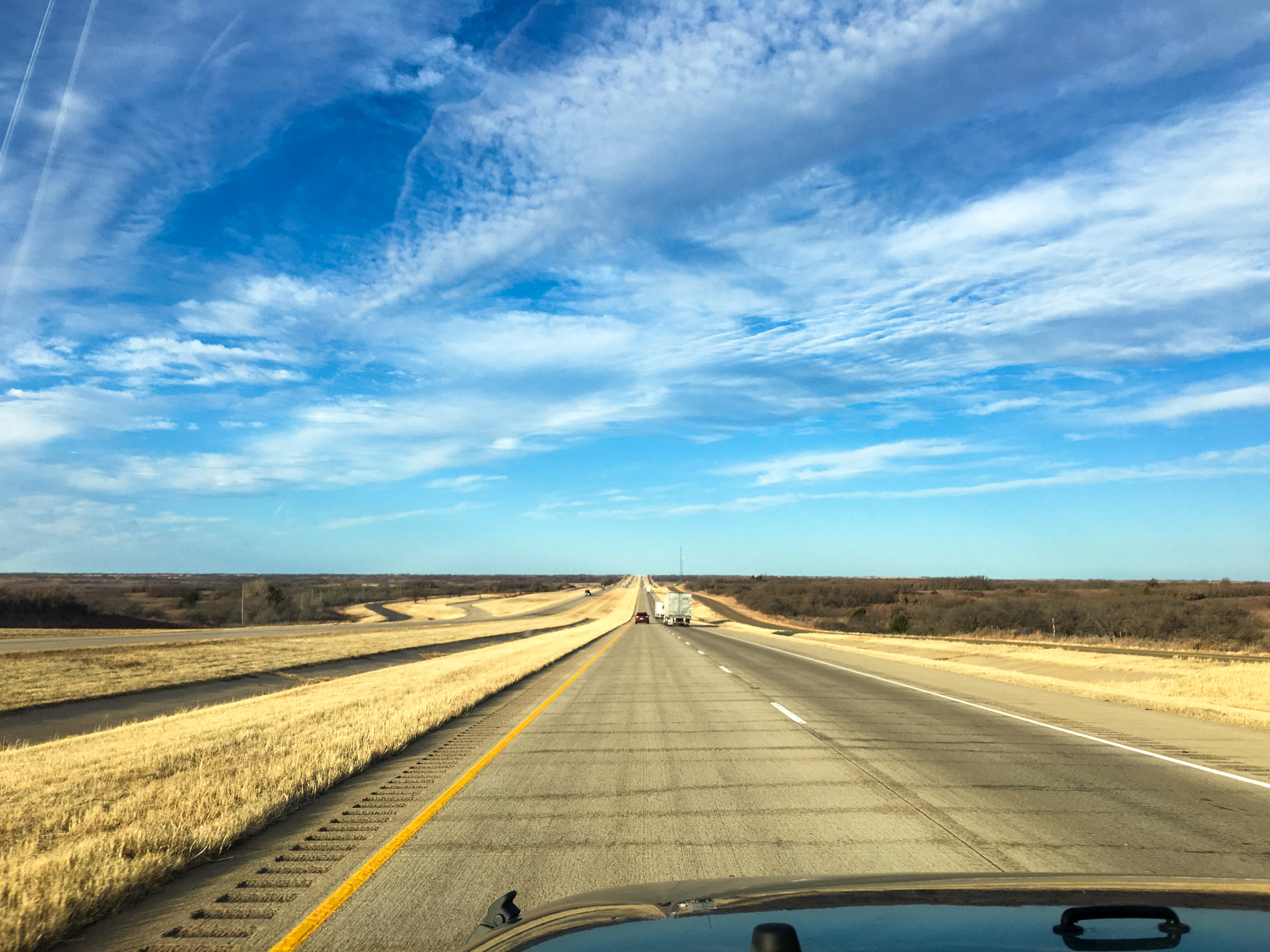 It’s not a bad photo for northern Texas. Good sky. The rain had stopped. The wind was blowing about 30 mph in my face, of course, and the Jeep was eager to plumb the depths of low gas mileage on most of the trip.

Spent the night in Holbrook, Ariz., because I stayed the night in Gallup, N.M. last time I was through the area. All the hotel and restaurant employees in Holbrook were bizarrely good. I dunno. The diner where I had dinner was selling Navajo blankets for what seemed like a really good deal. Holbrook.

Also, Northern Arizona has some really pretty roads. The stretch from Holbrook most of the way down to Phoenix is pretty good. 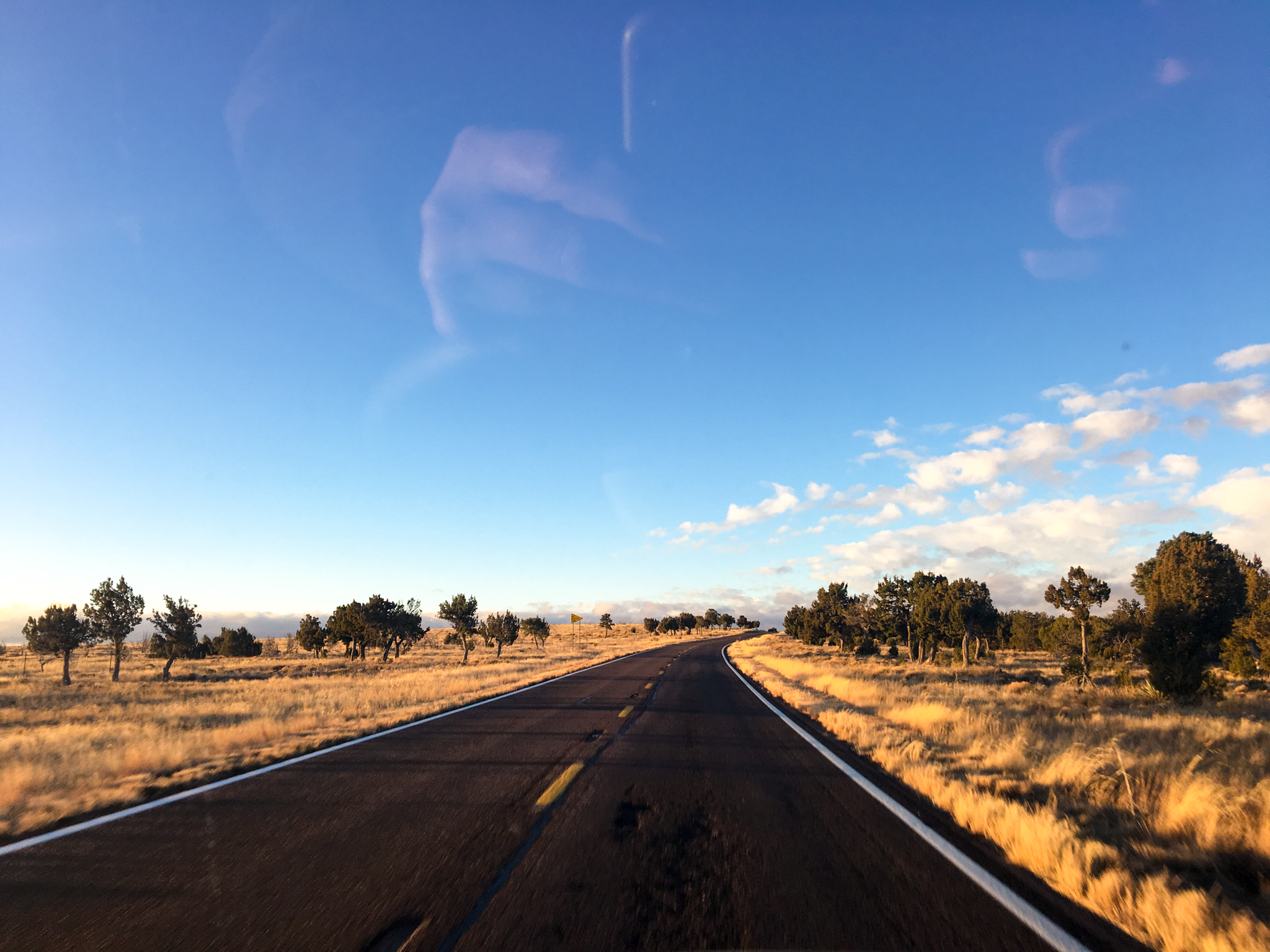 My parents flew down to Phoenix Christmas Eve and we holed up in my brother’s place in Ahwatukee for the week.

This isn’t particularly interesting. You can skip ahead if you want. 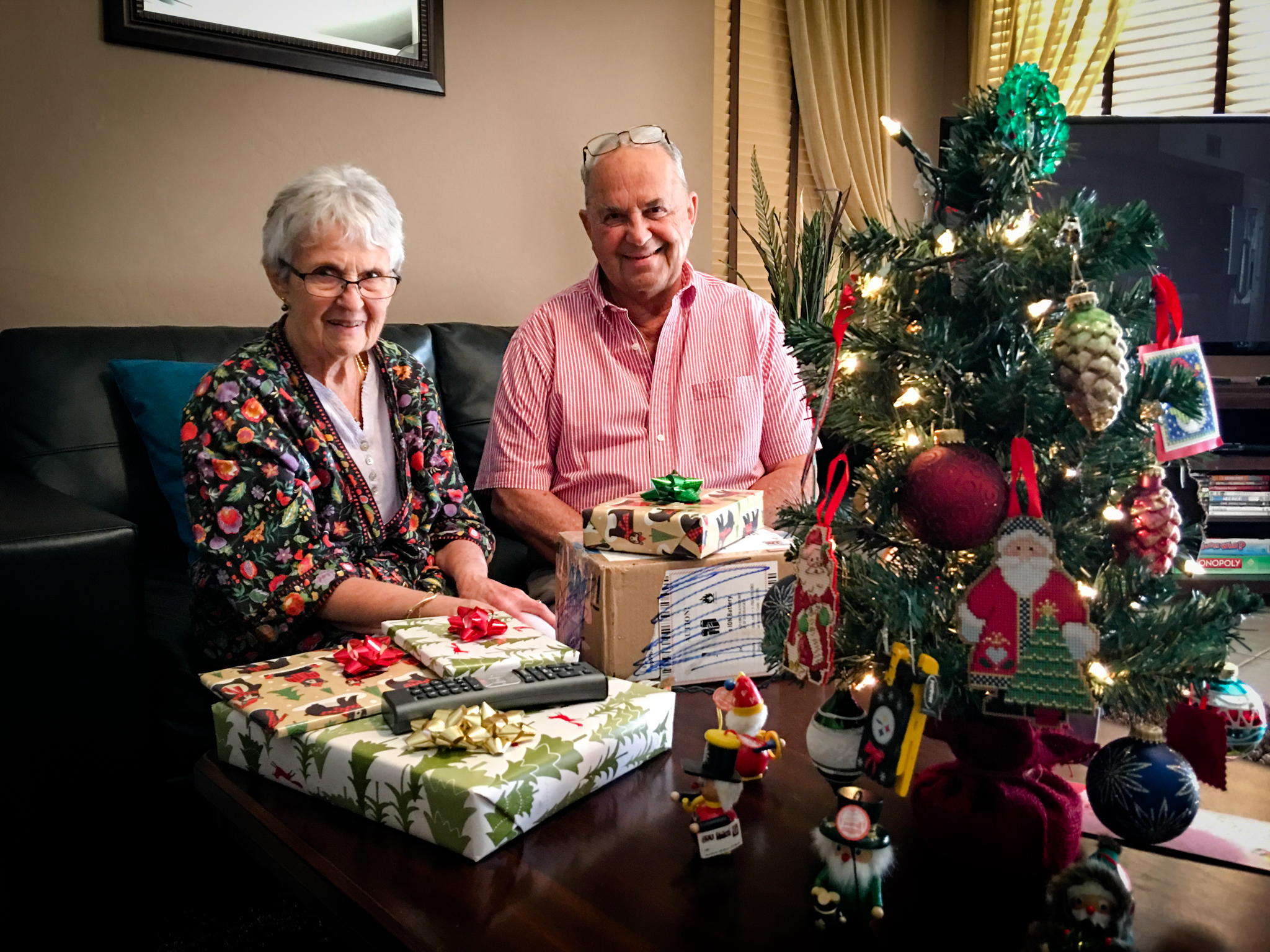 My mom has stylish bathrobes.

Day after Christmas (I think), my brother Rick brought his family through town on the way to Utah to disgorge my nephew at the MTC as he makes his way to yet another central American jungle (it’s *his* first, just not humanity’s). I probably have a representative picture of that somewhere.

You understand this is mostly just a journal intended for my own future consumption, right? 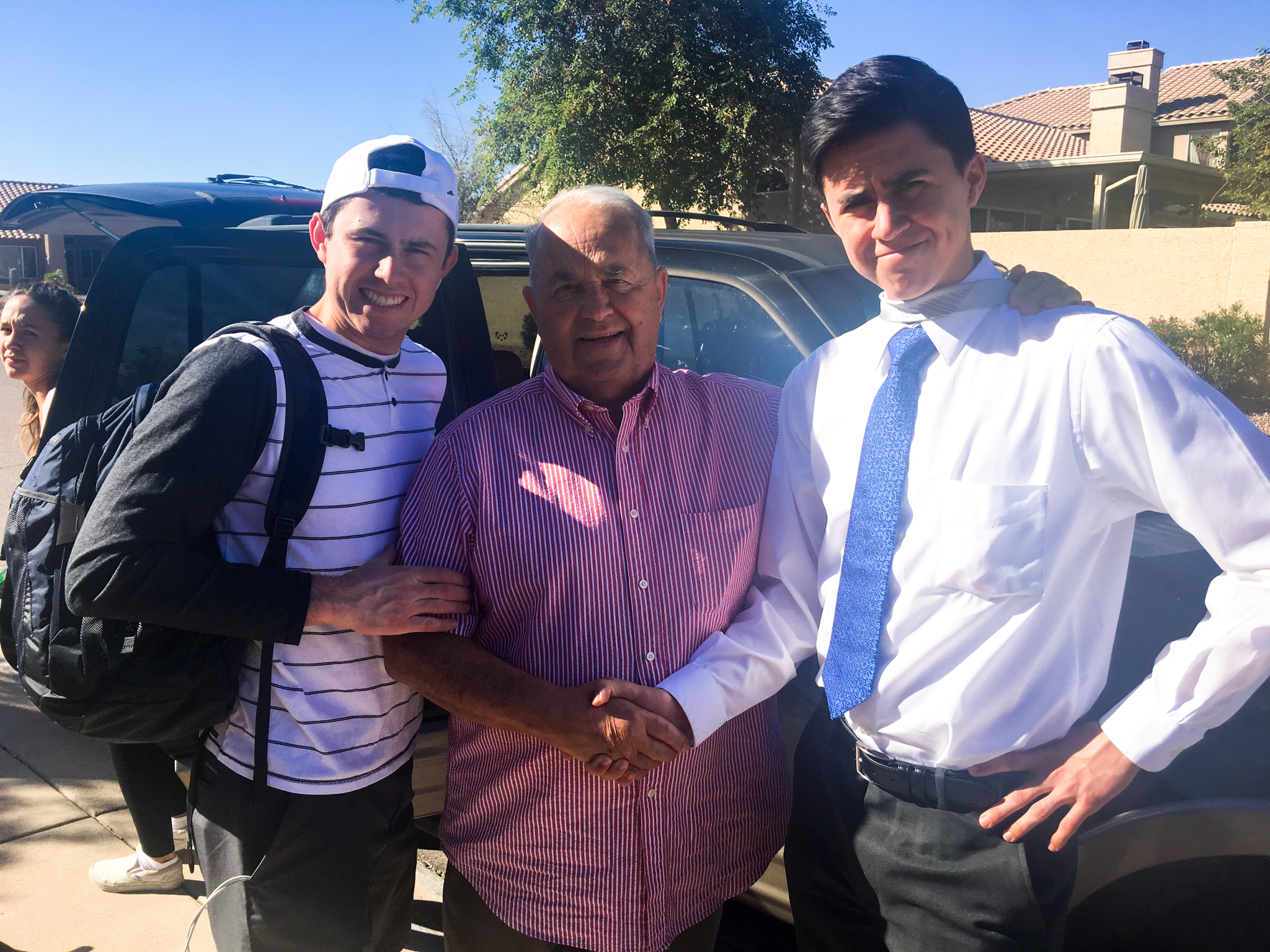 So there’s my dad with Ammon and Jacob and mad props out to Noelle on the photo bomb. We shake hands an inordinate amount in my family. I’m jealous of Jacob’s tie.

All right, then there’s a really good airplane museum down in Tucson that I wanted my parents to come to, and they kindly acquiesced to this keen desire. It’s the Pima Air and Space Museum; most of the airplanes are outdoors where you can climb under and around them. It’s nice to go to an outdoor museum for once.

Here’s my dad with the A-4 he always wanted to fly: 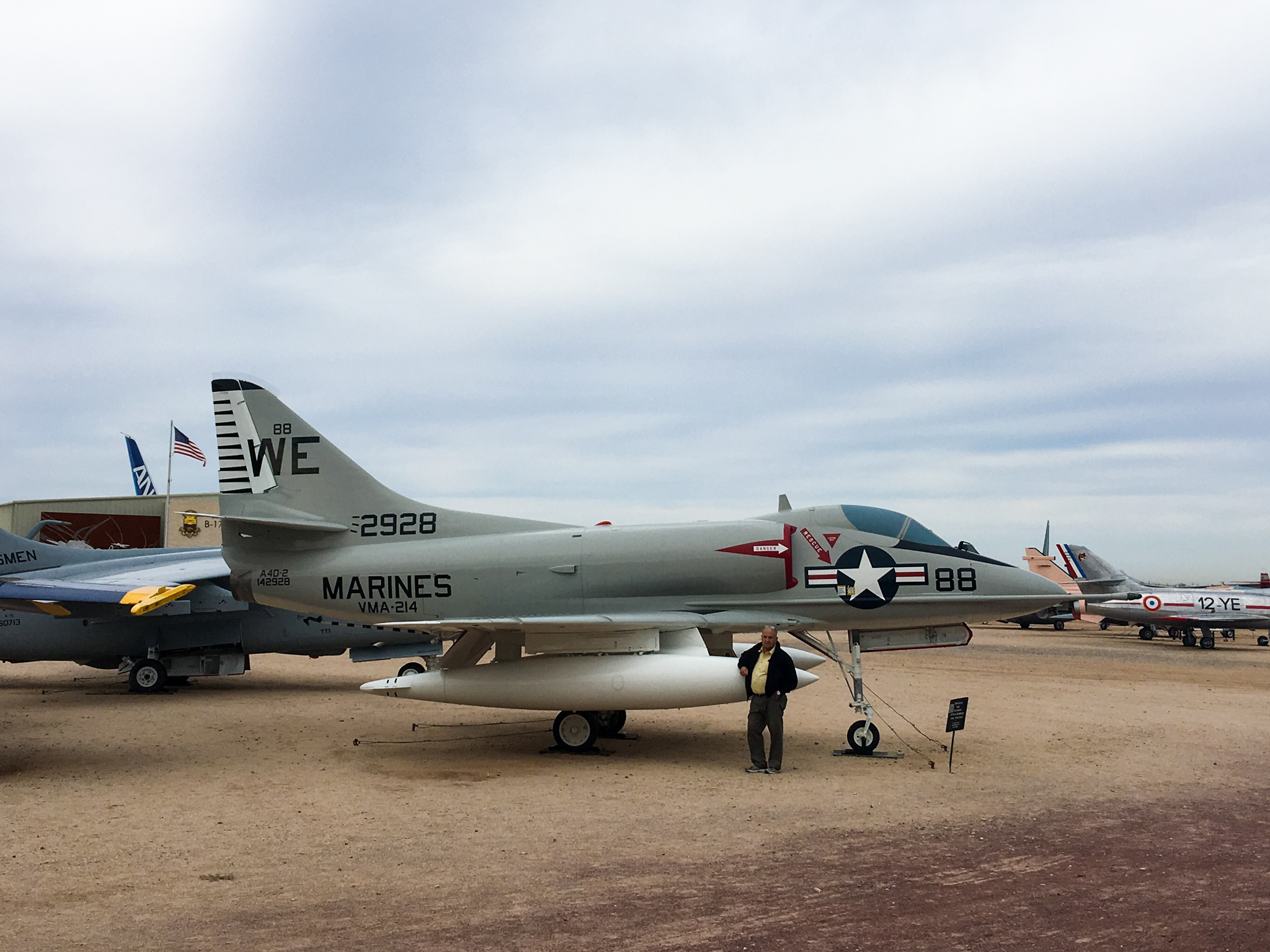 The extra fuel tanks really stand out on that one. 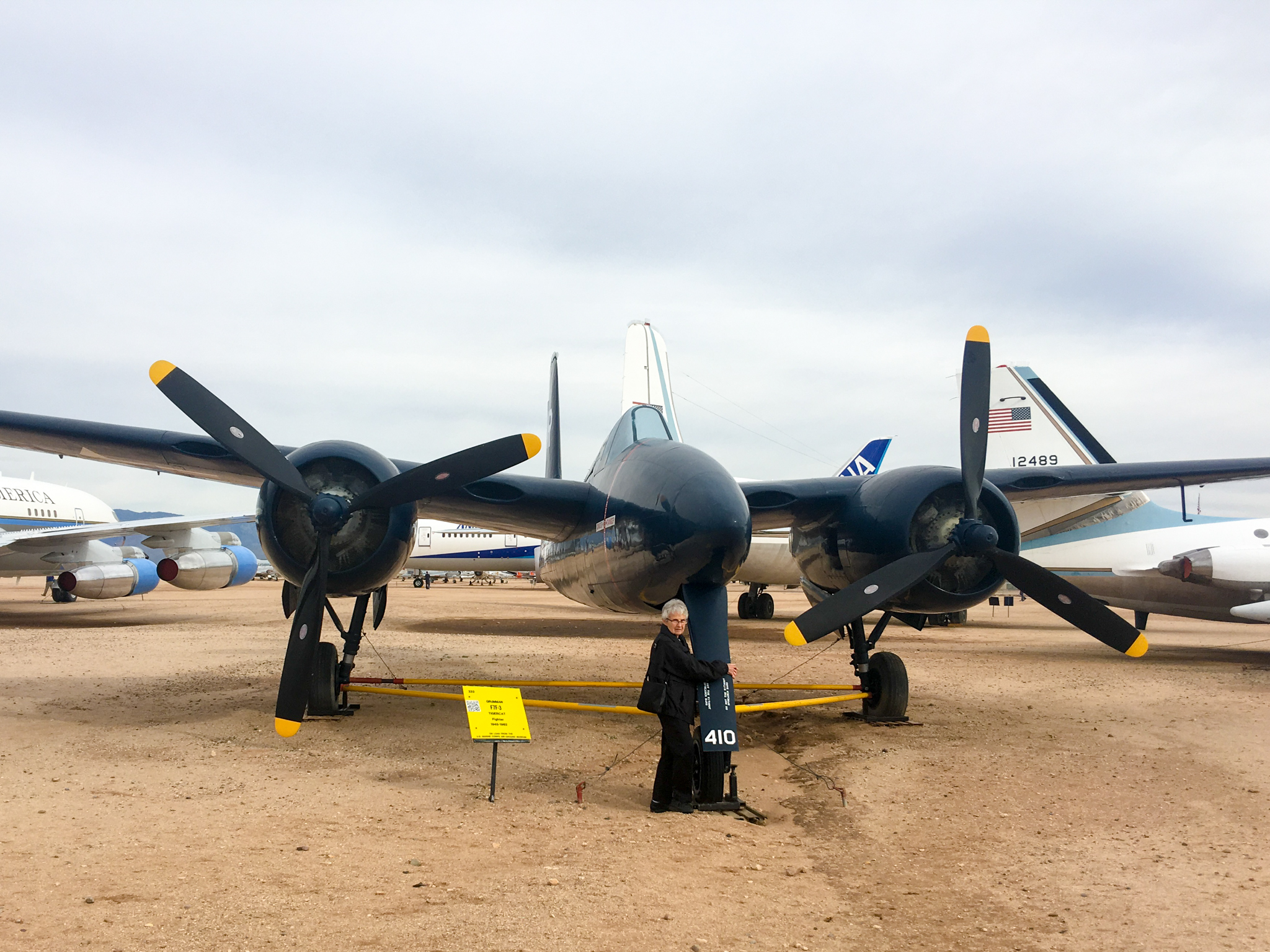 And then my mom showed an unexpected fondness for the F7F Tigercat. Big Grumman fan.

The museum is also the jumping-off point for the AMARG, the military aircraft boneyard out there. We went, but the old guy at the bus depot told us the wrong side of the bus to sit on. You know how bus depot old guys are. Anyway, it was cool enough, but the museum actually seemed more interesting.

And then on the way back from Tucson, we took a quick loop through the Saguaro National Park (eastern part), making it officially my 39th national park visited. And when I say national park, I mean National Park, which is different from National Recreation Area, National Wildlife Refuge, National Forest, and National Battlefield. For one thing, it’s a park. Anyway: they had a lot of Saguaros. 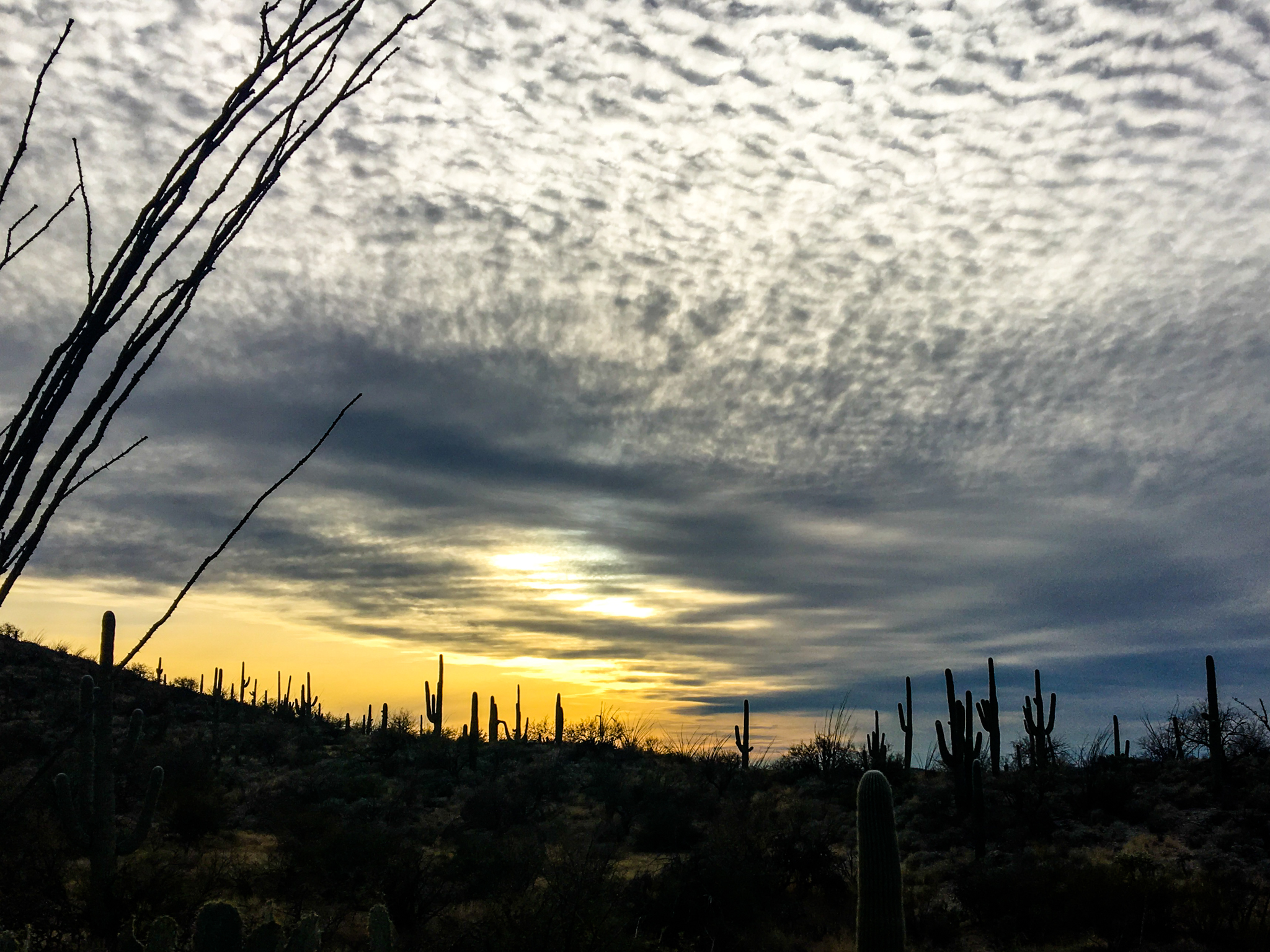 Also a pretty good selection of ocotillos and prickly pear.

Visited Hole in the Rock right by the Phoenix Zoo. Photographic evidence: 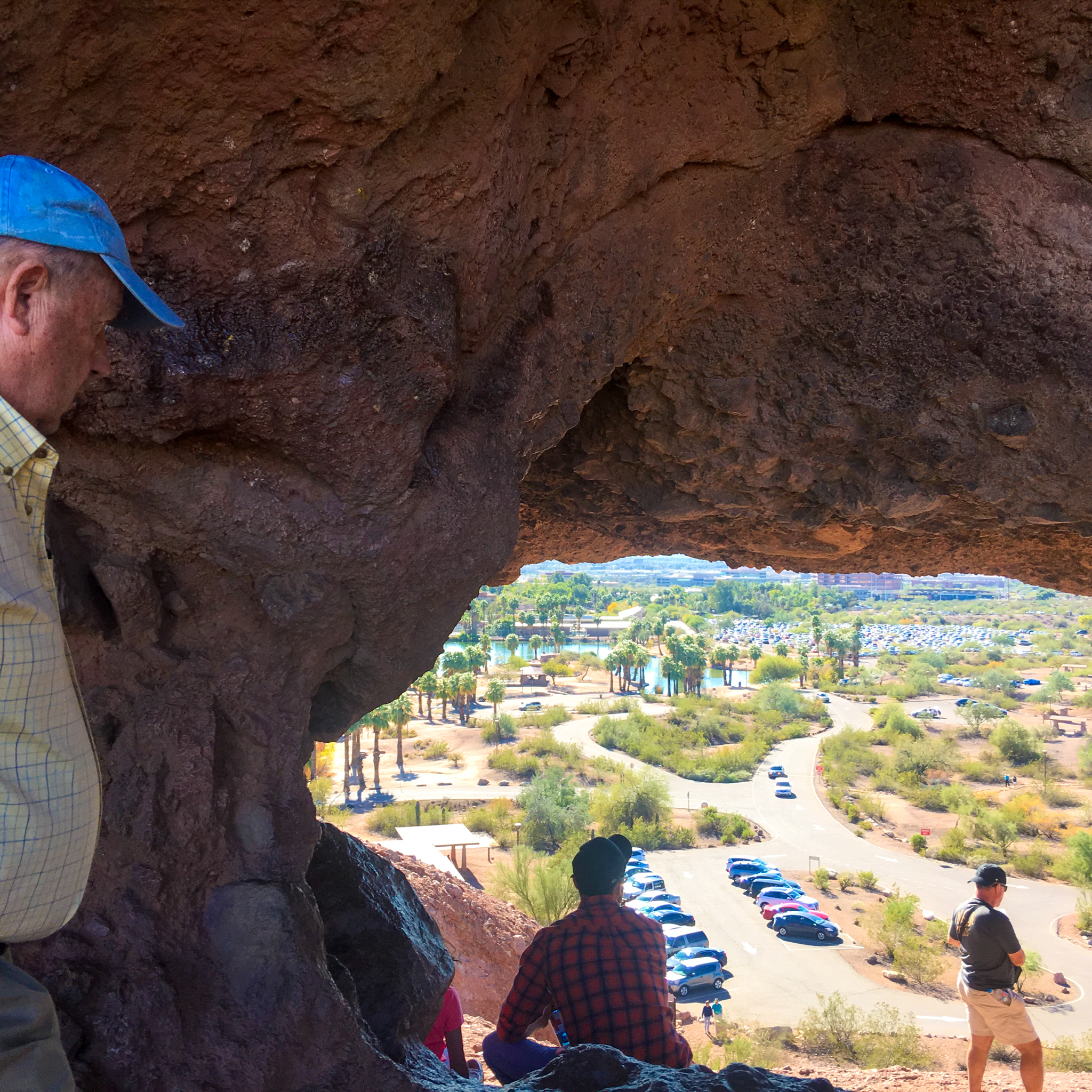 And also a real ghost town whose name I don’t remember, but where new buildings were being erected, making me wonder how “ghost town” was being defined. 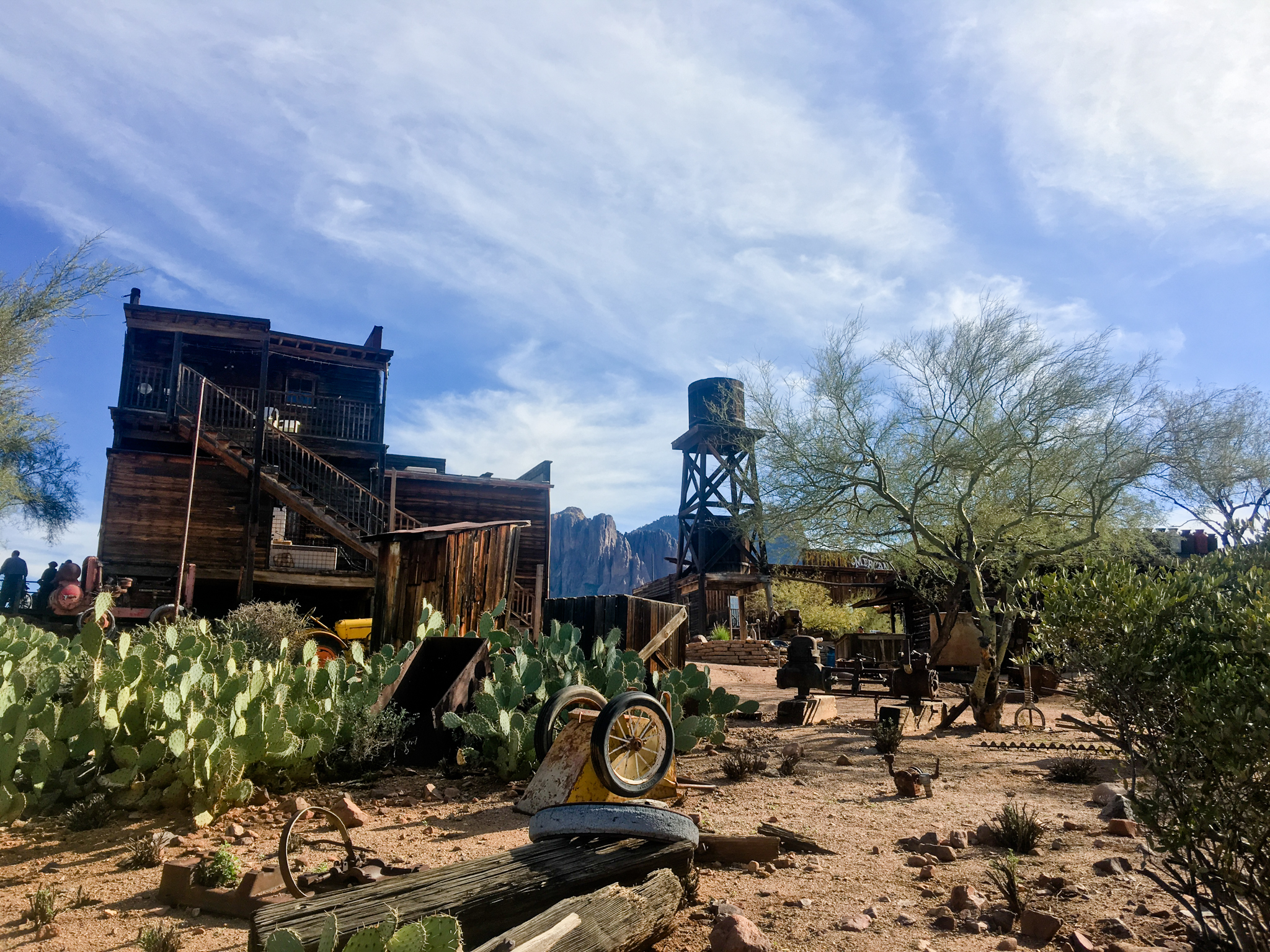 And then on New Year’s Eve I took off for Taos, because that’s just what I do.