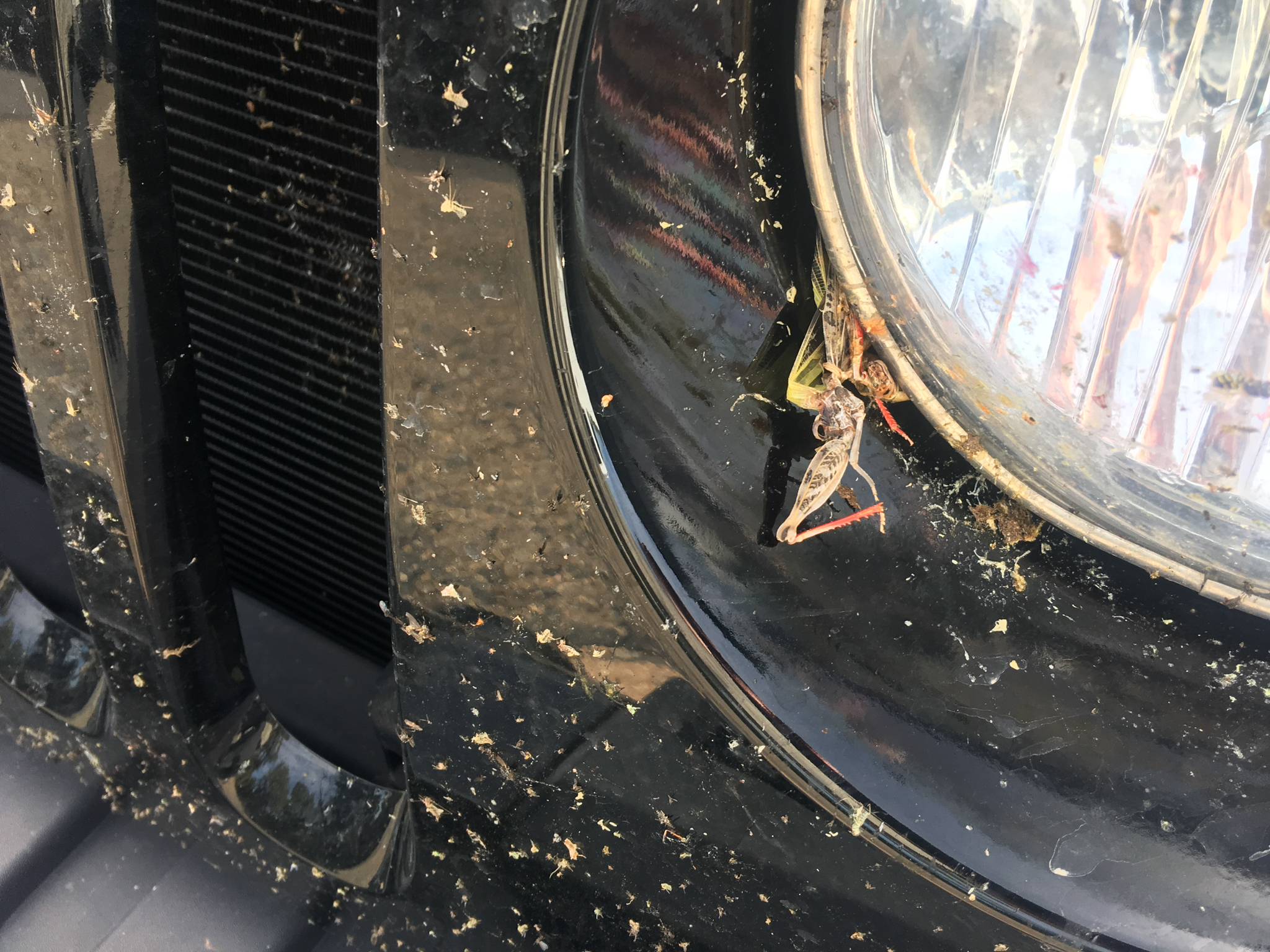 Let’s focus this post on the one car involved and the trip that brought it from Norman, Okla. home to River Heights.

There are a million ways to get from Norman to Utah, that all take the same amount of time, give or take an hour. I went one I’d never gone before and that has made all the difference. Via Kansas. It didn’t make much of a difference. A lot of bug splatters, but that would have been true in Oklahoma or Texas as well. Also bug wedgings: 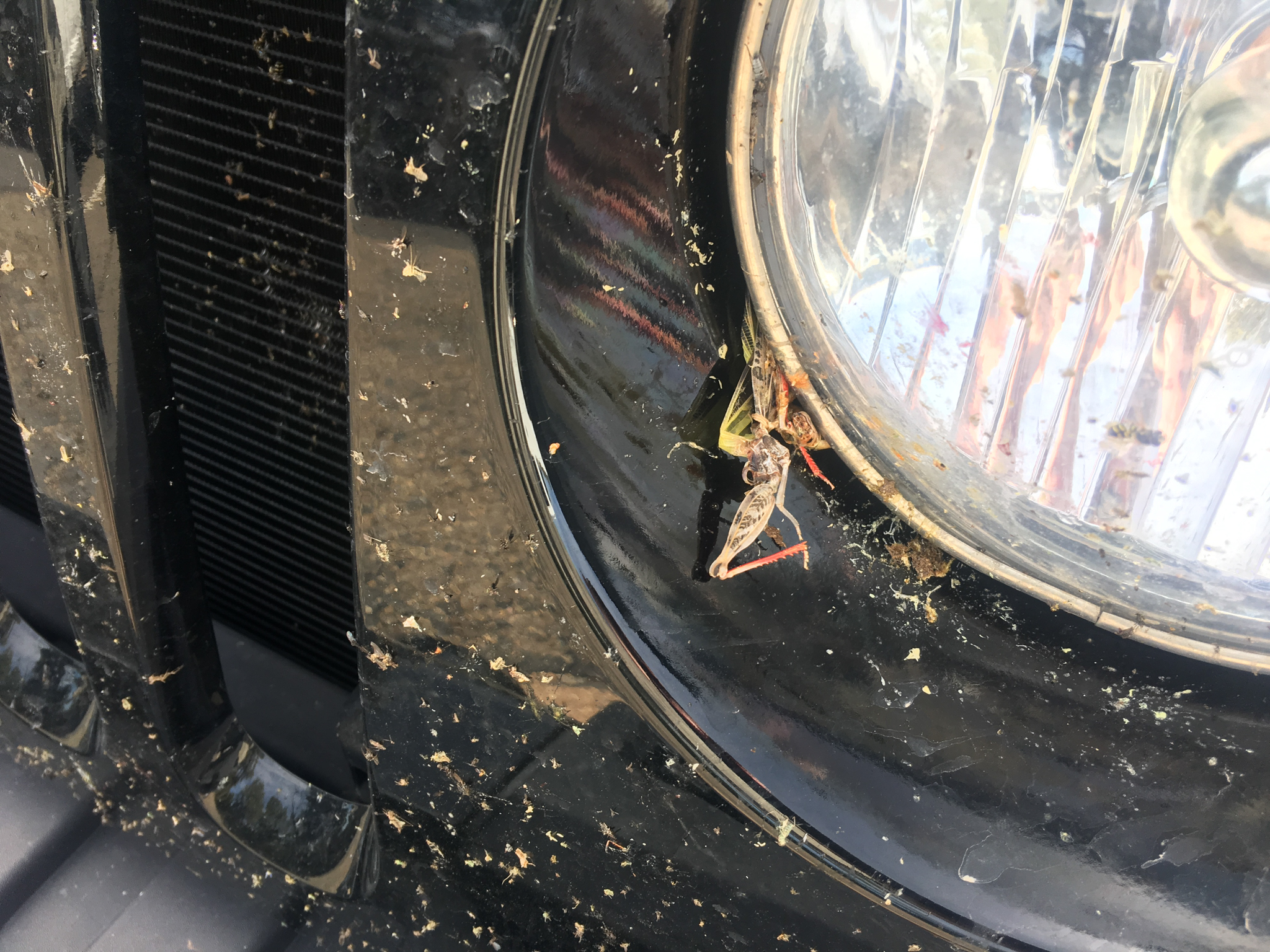 The goal on this trip was to also go by way of Mesa Verde National Park in an attempt to better amortize the cost of my national parks annual pass.

Spent the first night in a motel in some benign part of Kansas. Let’s call it Pratt. It could have been Medicine Lodge. It could’ve been Sawyer, but I’m gonna put my money on Pratt. 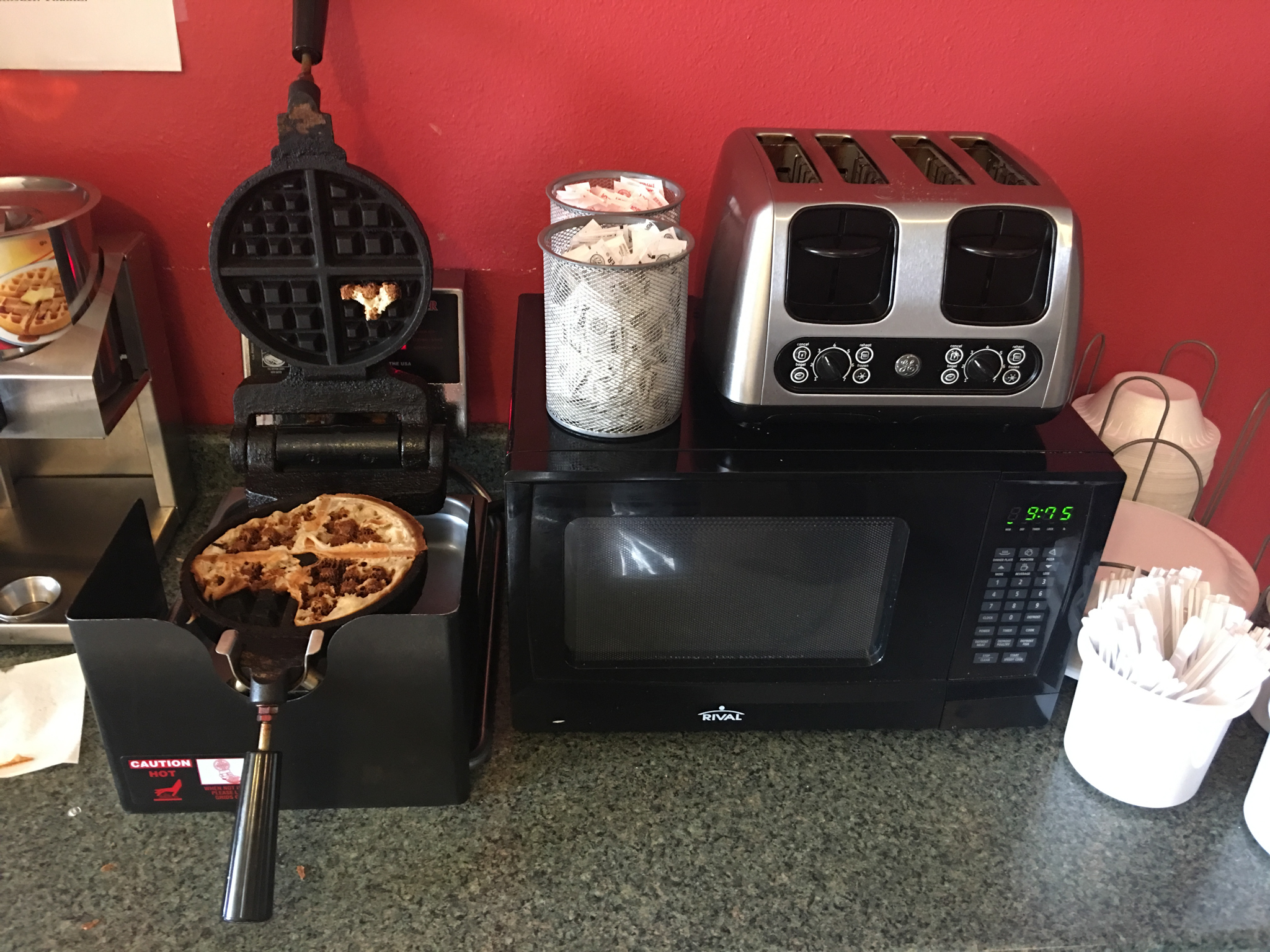 This was the breakfast room that morning. It’s difficult to say which was more disturbing, the waffle iron or the microwave giving the time using a metric-system clock.

Next morning, headed up to Mesa Verde. It was more popular than last time I’d visited and you don’t get to self-guidedly tour the ruins any more. I signed up for the very guided tour to Cliff House instead. But first I parked somewhere and took this picture. 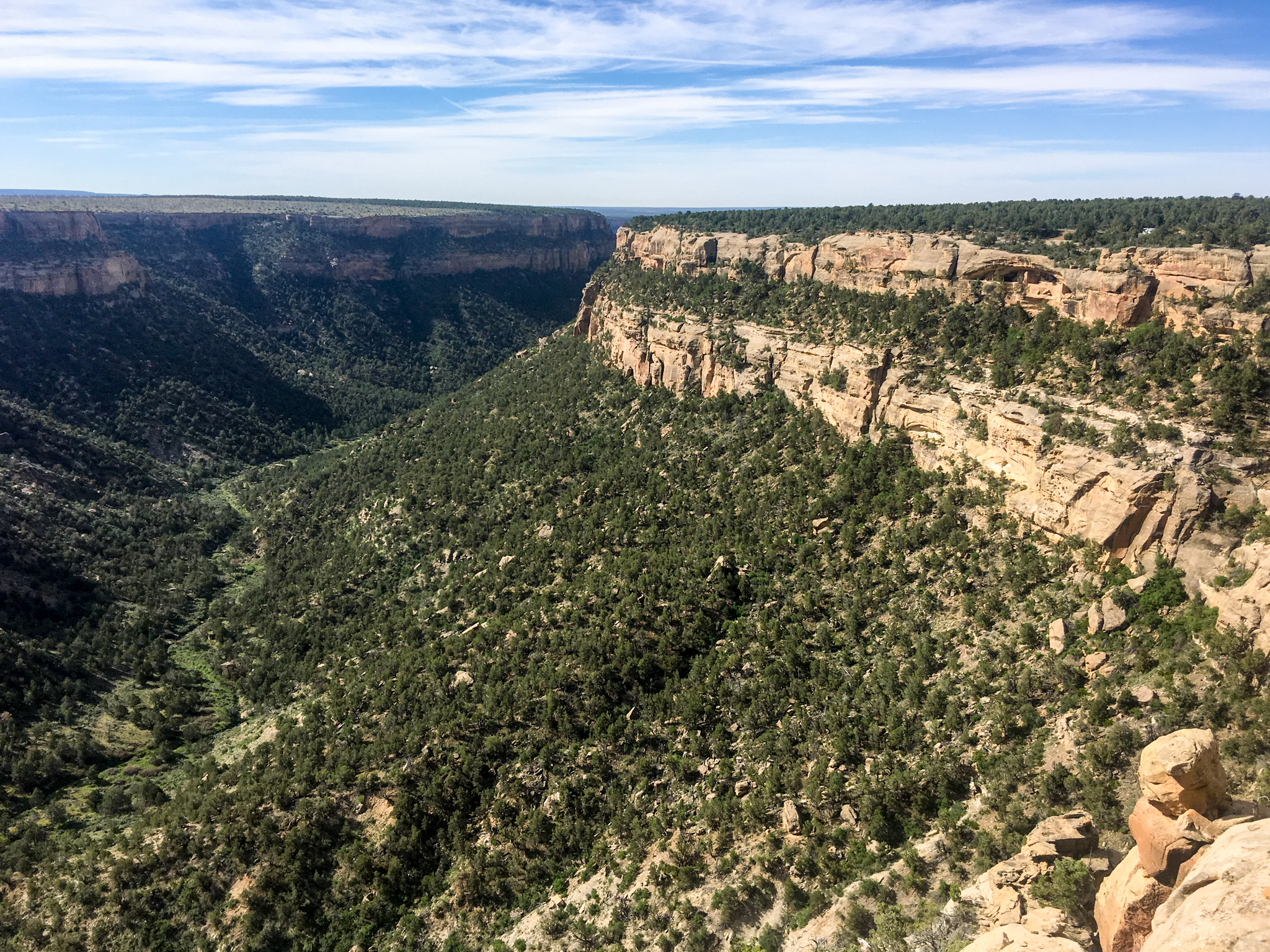 You can see the Cliff House ruin there at the top rightish area. I mean, “see”.

And then I and 50 of my closest friends got to tour Cliff House. At the start of the tour, the tour guide, Ranger Mark, informed us of all the dangers of our journey and suggested that we would all probably die of hydration some time in the next 20 minutes. Duly informed, we trudged down some steps then came to a tall ladder. 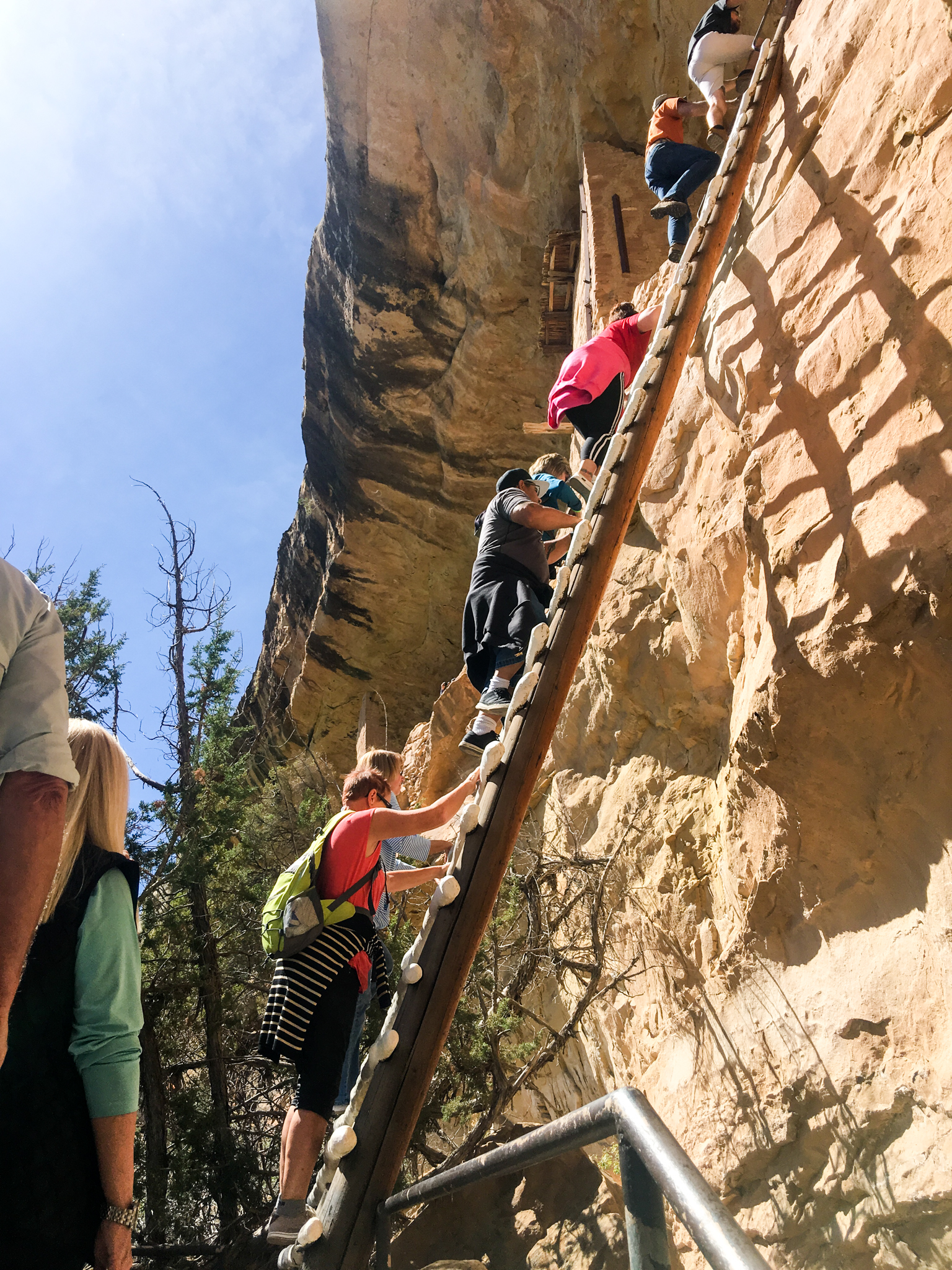 I don’t like heights much. One person in the group opted out and went back the way we’d came. The ladder was fine except for having to hang there waiting for the slower, older people to move. Anyway. 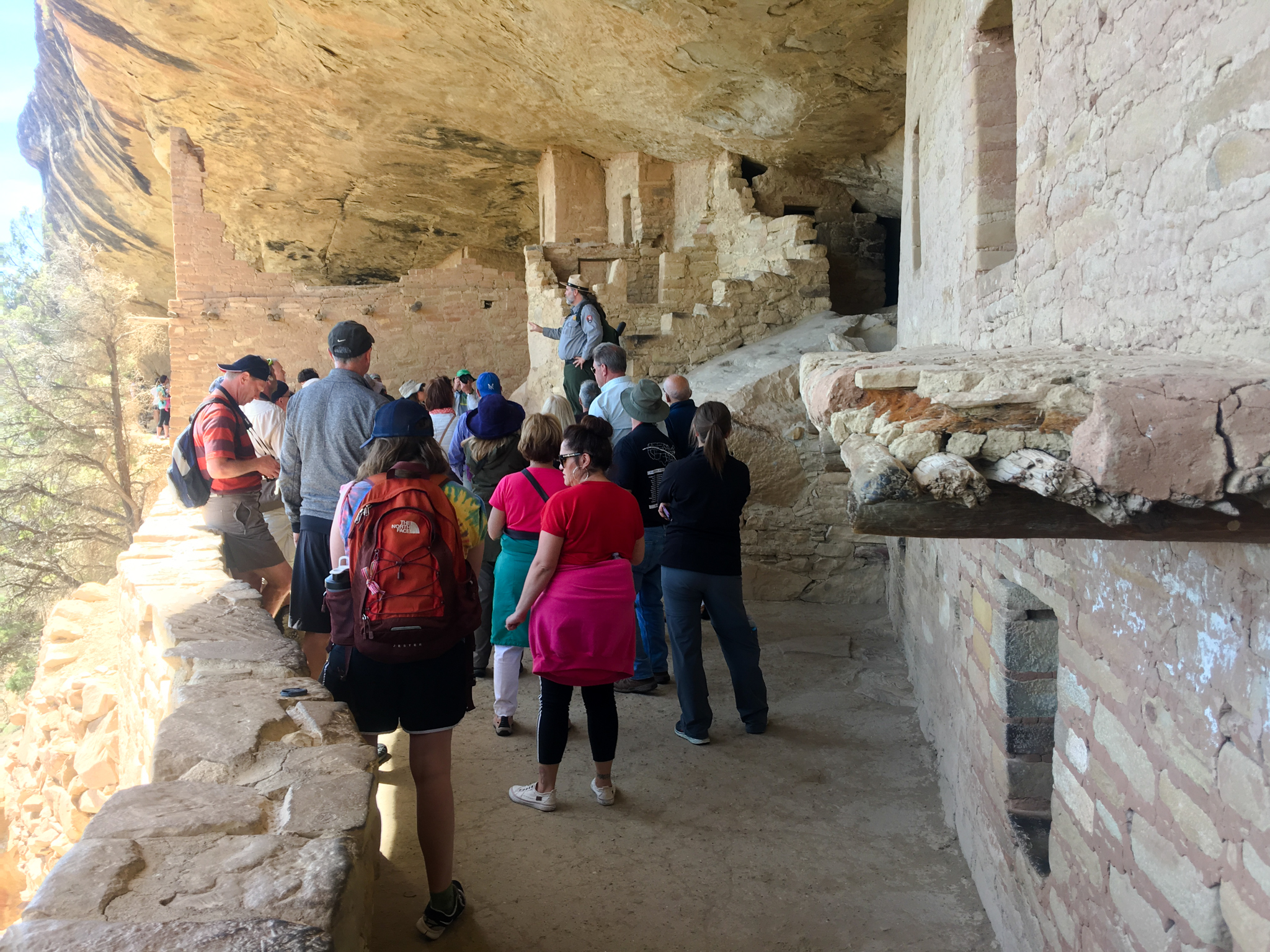 ^^ Ranger Mark explaining that no one knows what the ledge at the right of this photo was for. He was a good tour guide and lived in Tennessee eight months out of the year and only came out to Mesa Verde during the high season as a ranger. When not rangering, he delivers pizzas for a living. I imagine his wife works. 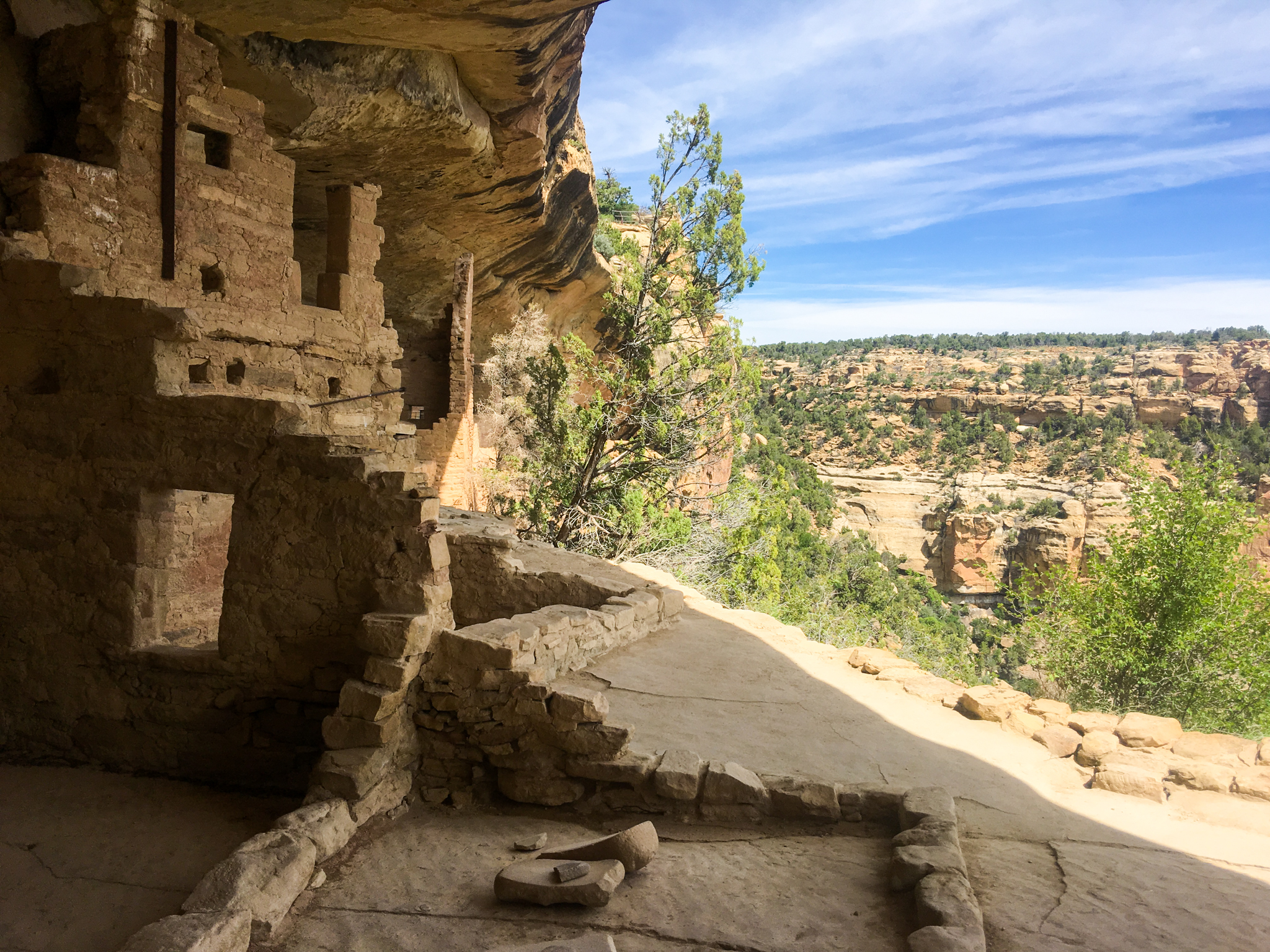 And that was kind of most of it. Had a brief discussion with Ranger Mark about the relative timelines between the Mesa Verde people and the Chaco Culture people. I don’t remember the outcome, though. I think Chaco Culture was older, but not by more than a couple generations. Or maybe I’m making that up. Anyway: the guy was pretty under-employed for eight months out of the year.

There was some other scenic drive that I drove around there, during which I took this picture of some other ruin. 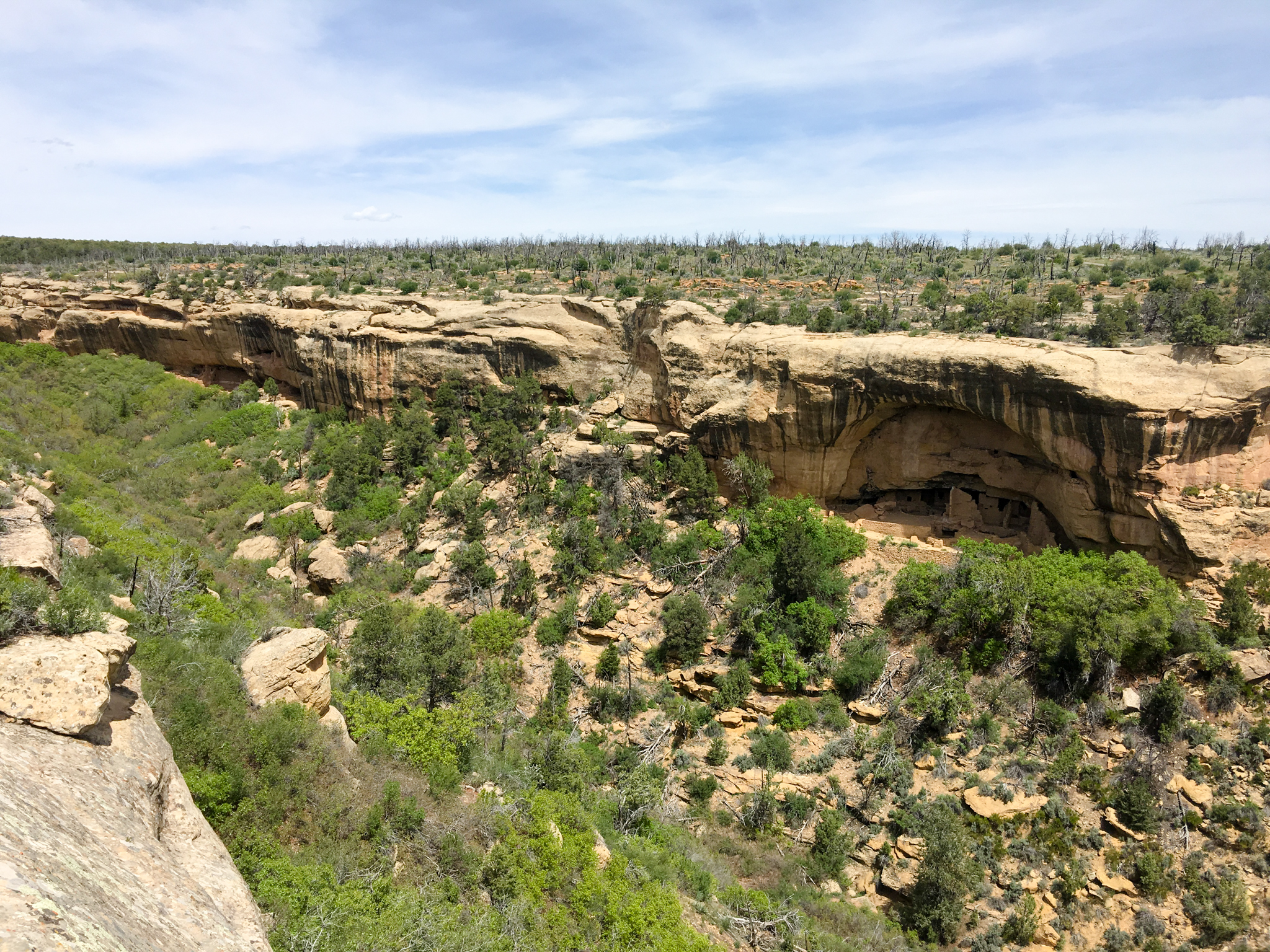 Then I drove to the visitor’s center where two trails diverged. Fortunately there was a Native American park ranger standing there and we had this conversation.

Me: Which one of these two hikes is better?

Him: There’s no such thing as a “better” hike.

I took neither, which also made a good-sized difference. My niece says that people like that are why she’s not interested in working for the Park Service. Hard to argue.

Then I drove to Price and stayed in another motel before heading on up to Cache Valley where, ten days later, the moving truck finally showed up to deliver all the packing paper that the company had decided to put into boxes a few days before I left. 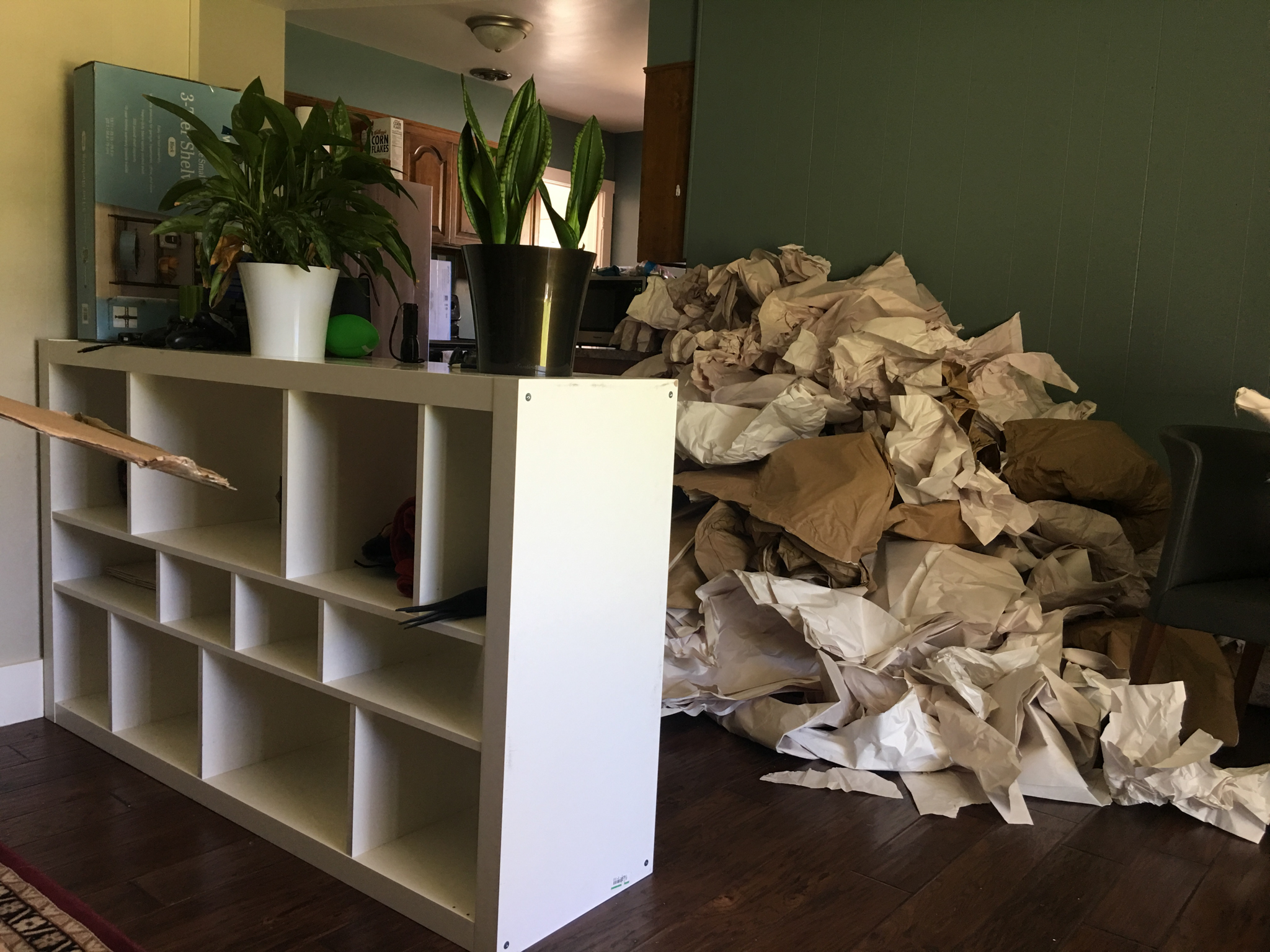 ^^ A fraction of the total.

And that’s about that. I really should’ve stopped off in southern Utah and re-visited Canyonlands and Arches, but was anxious to see the new house and find out what all was, in fact, broken. Time well spent.