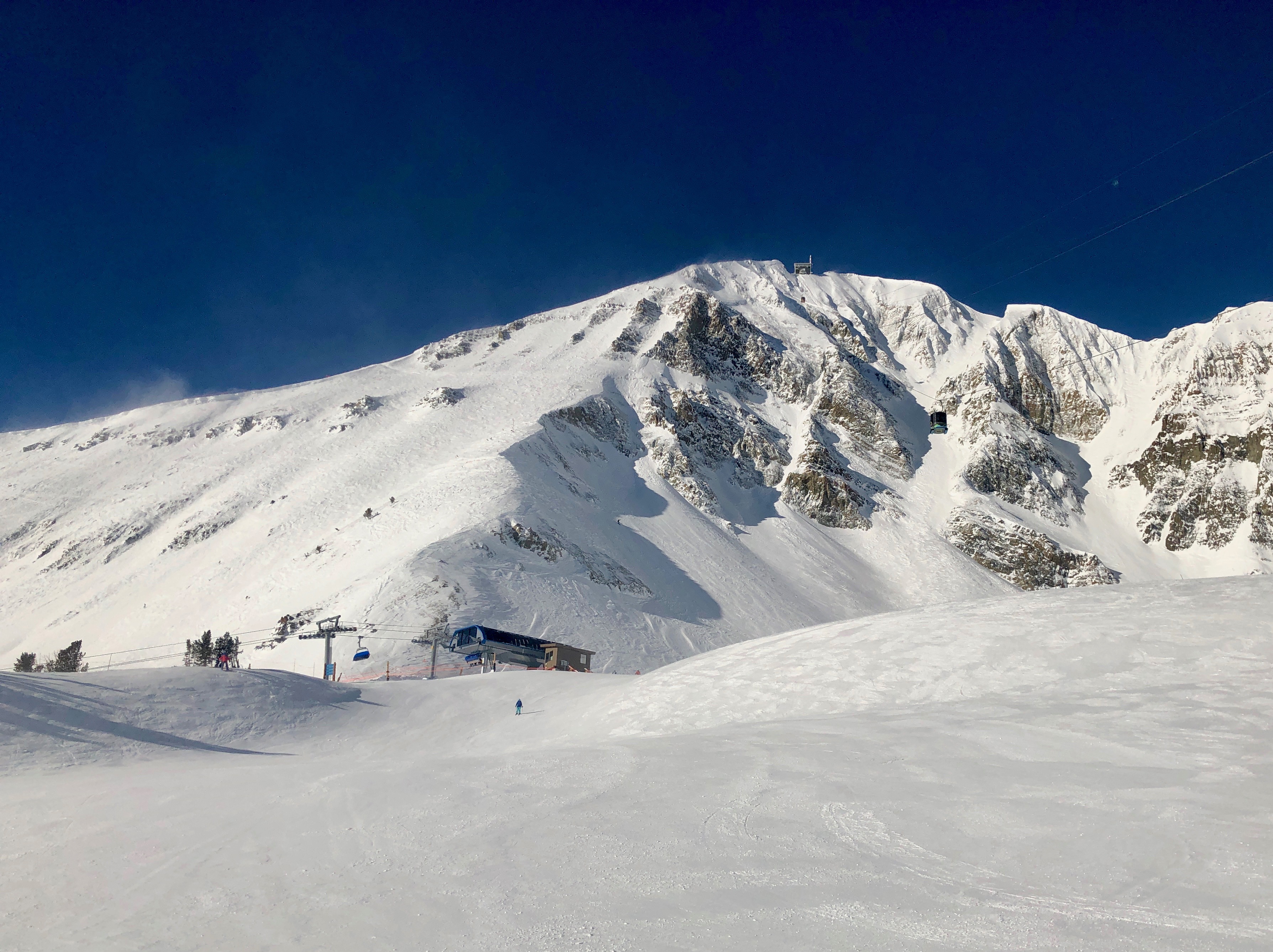 They were all better than Sun Valley.

The Mountain Collective pass I bought for this ski season included both Big Sky and Jackson Hole Mountain Resort (JHMR). And then there was spring break in March, so: northward, ho!

I’d never been to Big Sky before, although I’d driven down that highway from Bozeman to West Yellowstone. Speaking of: the drive up was mostly nice — it’s about five hours plus road-related slow-downs from my house up there. Roads were clear up until somewhere north of Island Park, then stayed a little dodgy till West Yellowstone.

Then they got better.

I’m going to start a pod cast where I do day-to-day evaluations of random roads. No, not really.

Condo was walking distance-ish from the resort, but there was also a shuttle bus that stopped by every hour. I should’ve taken a photo of the shuttle bus. It was crowded on-board though.

Also, the condo complex’s buildings were all named after European ski resorts and it bothered me that one of the buildings was called Grin del Wald. OTOH, “Smile of the Forest” seems like it’d be a happy place if only it were socially acceptable to mix three languages into one misnamed building.

My condo was in St. Moritz, which is less interesting.

They hadn’t had any new snow in a while, but it was cold enough and sunny enough that it skied pretty well anyway. A lot of steeps, but plenty of all kinds of terrain, well-served by a large number of lifts. Had a couple of lifts with heated seats and bubbles, one of which was an eight-seater on which, once you put the bar down, you couldn’t get it back up again (until you were at the top station).

The place didn’t remind me of anywhere else, although it’s probably more European than most US resorts in terms of above tree-line and scope.

From Big Sky it was, like, four hours or so to Jackson. Drive was nice. All the driving on this trip was pretty scenic.

I think I’d never driven through this area when the grandest Tetons were visible (due to clouds).

And then it turns out this is the only photo I took of Jackson/JHMR:

It is a very nice library (where I killed time after checking out of the one hotel and before I checked into the next one).

Jackson Hole Mountain Resort, on the other hand, is not my favorite. Though, to be fair, I’ve only been there twice and neither were particularly good snow days. On this trip, they hadn’t had snow for a week. Also, the majority of the terrain there is pretty steep, which, given the lack of snow, means:

And there just aren’t that many intermediate runs there. And the ones that are there are pretty boring — just wide lanes on either side of the chairlift-style boring.

Even though that’s the only picture I took of it. Still, for spring break next year I think I’m just going to go up and spend a couple days at Targhee. It seems like it has the exact virtues that JHMR lacks: a lot of terrain per lift, not all that crowded, not expensive per se, and pretty easy parking. TBF, though, the food is also meh. I think that’s just a Wyoming thing probably.

And then I went home.

PS, Thanks to Jon and Erin for putting me up at their house. Again.