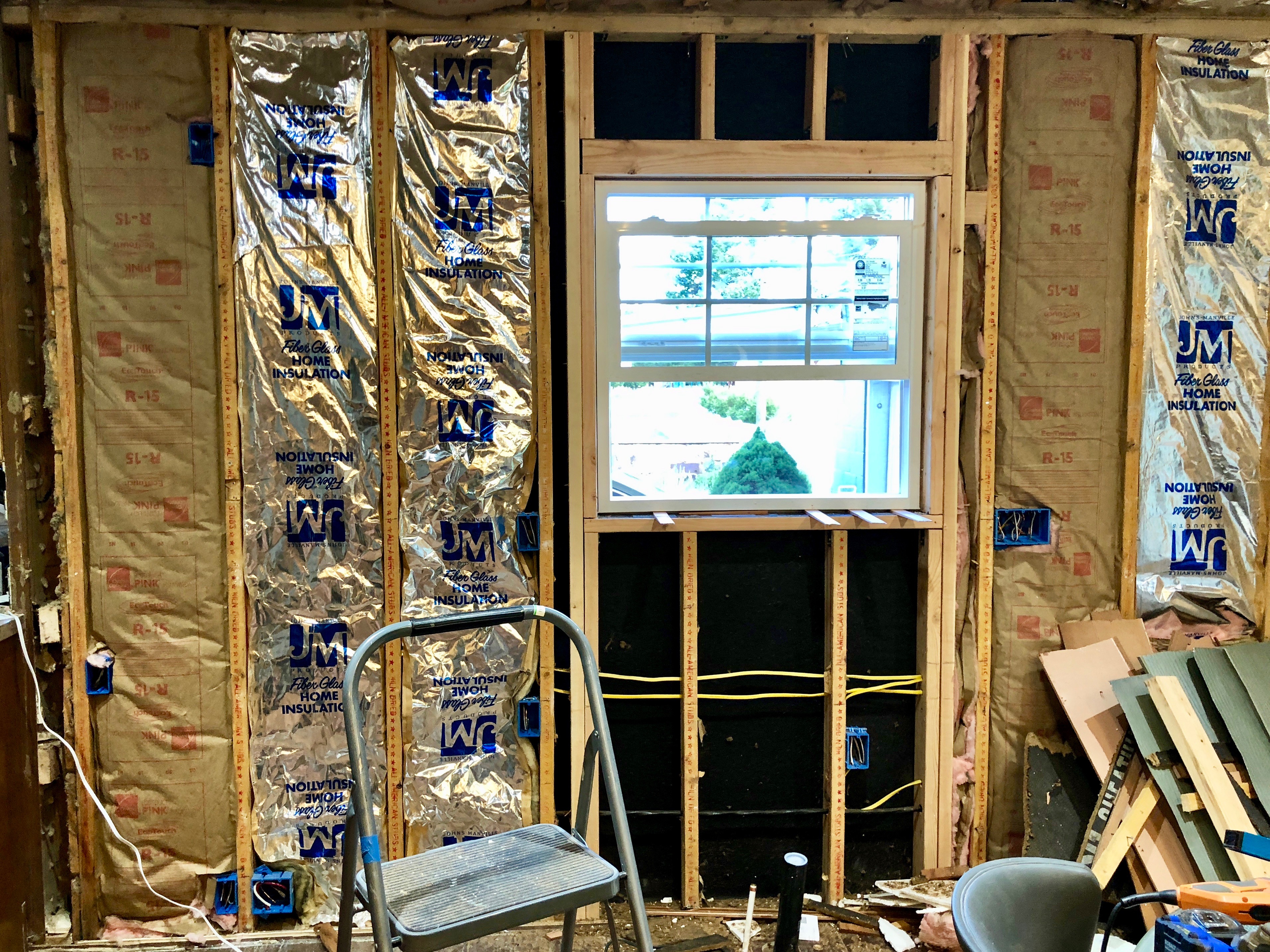 Next up in the project was getting the new window installed. That corner of the house was super-dark, and with the kitchen going in there, it needed a window. I actually tried calling several professionals to see if I could find someone to do this part for me, but no one wanted to :(. I think only one of them even bothered to call me back. Plus, then, Mike Nelson from the ward talked me into thinking I could DIY it and have it work out. So there was that.

And then this next part was scary:

The house did not collapse immediately thereafter, which I found both surprising and endearing. Eventually managed to get the new window framed up the way some guy on YouTube said I was supposed to.

Somewhere in here was also the time that I enlisted the help of an electrician — Austin, who lives down the street from me, was (is?) an apprentice electrician and I think was curious to do some residential work and had a more-experienced buddy, Andy, who could also help. Austin also got me lined up with a dry waller, Rick.

These names are crucial to the rest of this serialization. Do not lose track of these names*.

I probably could’ve gotten the electrical figured out, although Austin and Andy were way faster about it and did a way better job than I ever could. Plus I wasn’t sure I would’ve figured out some parts of it (e.g., how to get the light switches moved from the wall seen above and instead installed in the wall opposite). Also plus, Andy was the best kind of OCD — none of the junction boxes could wiggle, all the wires were straight, everything was lined up perfectly and level, etc.

As for the drywall, there was never a serious thought to take that on myself. And then, some time after I got in touch with him, Rick noted that it’d end up costing the same and looking a lot better if I just tore out all the old drywall and let him put up all new. In other words, during June most of the project area walls got taken down to studs.

In the above photo you can actually see the light fixture that was left live. I ended up paying some kid Rick knew to take out the ceiling where that light fixture was — it was made of the old-school plaster stuff and tough to work with (not the lath-and-plaster stuff, the stuff that, historically speaking, came between that and sheetrock). I coulda DIYed that, but Rick’s kid-associate was cheap and the first hour I spent prior to enlisting help had resulted in about a 1-inch x 1-inch square of plaster being removed and a lot of cuts from the wire mesh holding it all in place.

Here are Austin and Andy doing the first pass at the electrical.

Another reason it was good to hire this out was that I wasn’t excited about dealing with installing the new breakers and wanted to make sure that what was done was actually to code. Also, they knew what the right thing to do was in every situation whereas I would’ve been researching online for three hours before making any decision.

Electrical work passed Aela’s preliminary inspection and tastes great! She likes to steal stuff from workers when they leave their gear on the floor. She particularly likes tape (electrical, plumber’s, and masking — in that order), in case you’re trying to think of something to get her for Christmas.

Then Mike Nelson came over and helped me with the crazy parts of the window install.

And then apparently I put up new insulation in the ceiling.

I closed out the month by road-tripping up to the northwest and ignoring the house altogether. So there you go.

* You can lose track of the names, it’s fine. I think in the next post I just revert back to calling Rick “the drywaller” anyway.