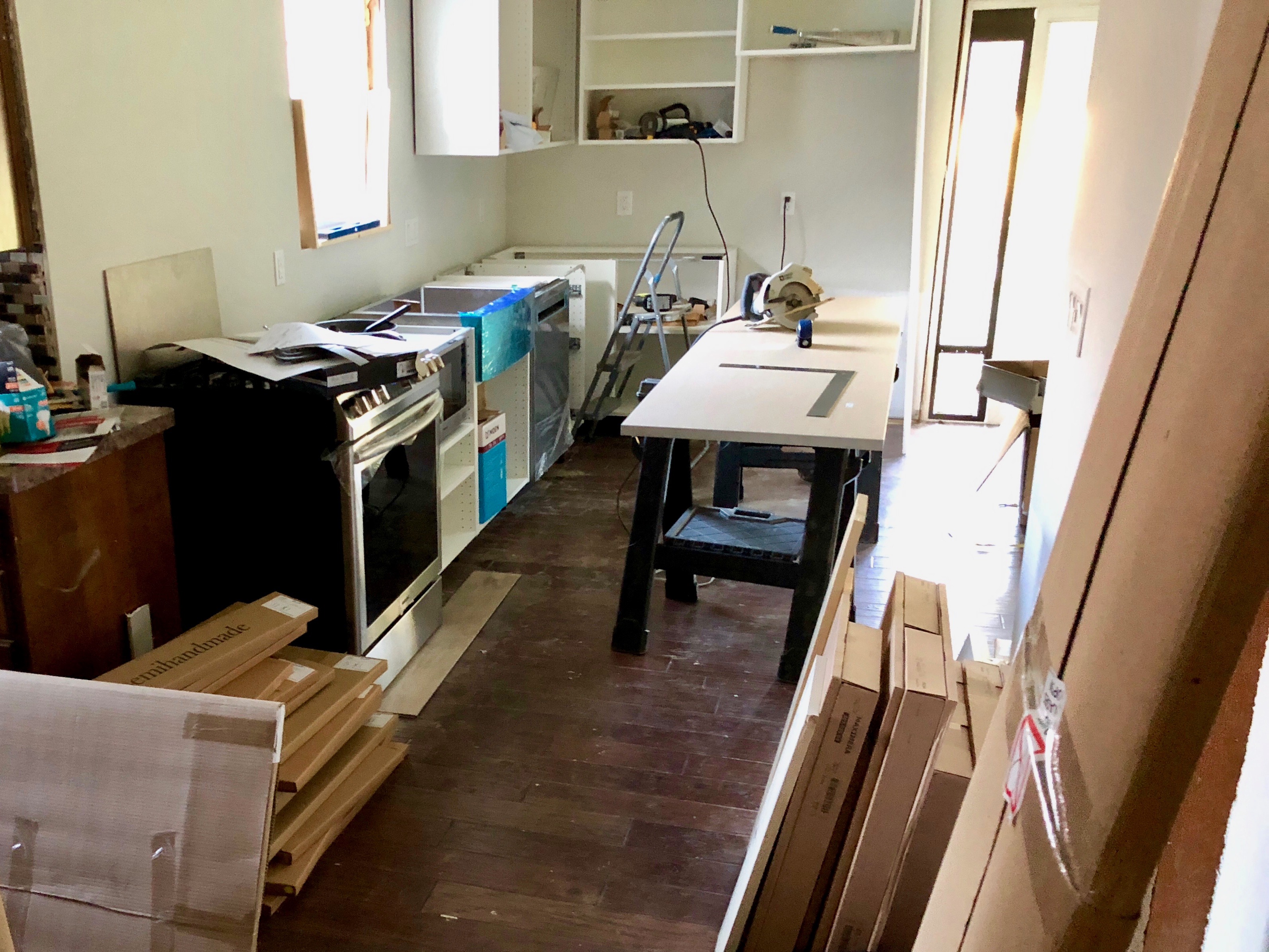 When I left town at the end of July, that coincided with the drywaller’s schedule. In other words, I timed it so I could be out of the house during what I imagined was going to be a neverending indoor dust cloud. So when I got back from the northwest road trip, I was met with this:

It usually makes me nervous to be gone while a contractor does anything, but this one and it worked out super well. Between the superfluous living room addition, the entry way to the kitchen area, and the old kitchen itself, there were a lot of uneven surfaces at the stud level. Now, though, you can’t see any of them.

Sadly, Rick doesn’t really do drywall for a living any more. It’s more a hobby-for-money or something. Both the drywaller and (non-residential, moonlighting) electricians did unusually good work. Almost seems causal — from now on, I’m only hiring contractors who don’t depend on their contracting for a living (not really).

Then I primed and painted.

In the above photo, you can see also the light switches going in on the new wall. Also, that weird jagged hole at the bottom of the wall was my fault. Would rather not discuss. I thought there was a cold air intake there.

I had ordered all the cabinets from IKEA and all the doors from a third-party cabinet door company (that specializes in making doors for IKEA cabinets; Semihandmade is the name of the company). These arrived in two separate deliveries during August, effectively turning most of my house into a pile of cardboard (there’ll be a picture at some point). Those deliveries happened last August and starting about three weeks ago the house no longer feels primarily like a warehouse for flat cardboard boxes. That’s was a long, ugly period of time.

For the wall cabinets, you screw a rail into the wall studs, then you hang the cabinets on the rail. Particularly after that cabinet in my house in Oklahoma fell off the wall (the builders missed every single one of the studs when hanging a six-foot-long cabinet using 18-gauge finish nails), this seemed a solid approach. Plus, building and hanging IKEA cabinets can be done solo. Plus I’d used IKEA cabinets when renovating my Pittsburgh kitchen and it was a reasonable experience.

This time wasn’t as good of an experience, but I’ll maybe describe that further when we get to when the bad parts happen. Although there’s always this: the back on these cabinets are just cheap laminated cardboard (that you can tear/puncture pretty easily) and that you then nail into the cabinet and therefore can never detach. They could’ve done something much, much better for $0.19 more or so. I’m guessing.

I also had the plumbers come back and run a gas line for the new stove. And then bought a new gas stove as well as a new dishwasher. I think I made that decision the same week I was thinking I was going to be staying in this house for a while. Then that week ended and I’d already paid for the stove and dishwasher.

The electricians came back and finished the kitchen-area wiring during this timeframe.

That $400 MDF panel resting on two sawhorses would served as my kitchen table for the next six months. Eventually a hood would get hung above the stove, but not during August 2018, no.

I also did a little demolition in August in the laundry room-to-be, but I’m going to lie to you and tell you it happened in September. Will smooth out the narrative.