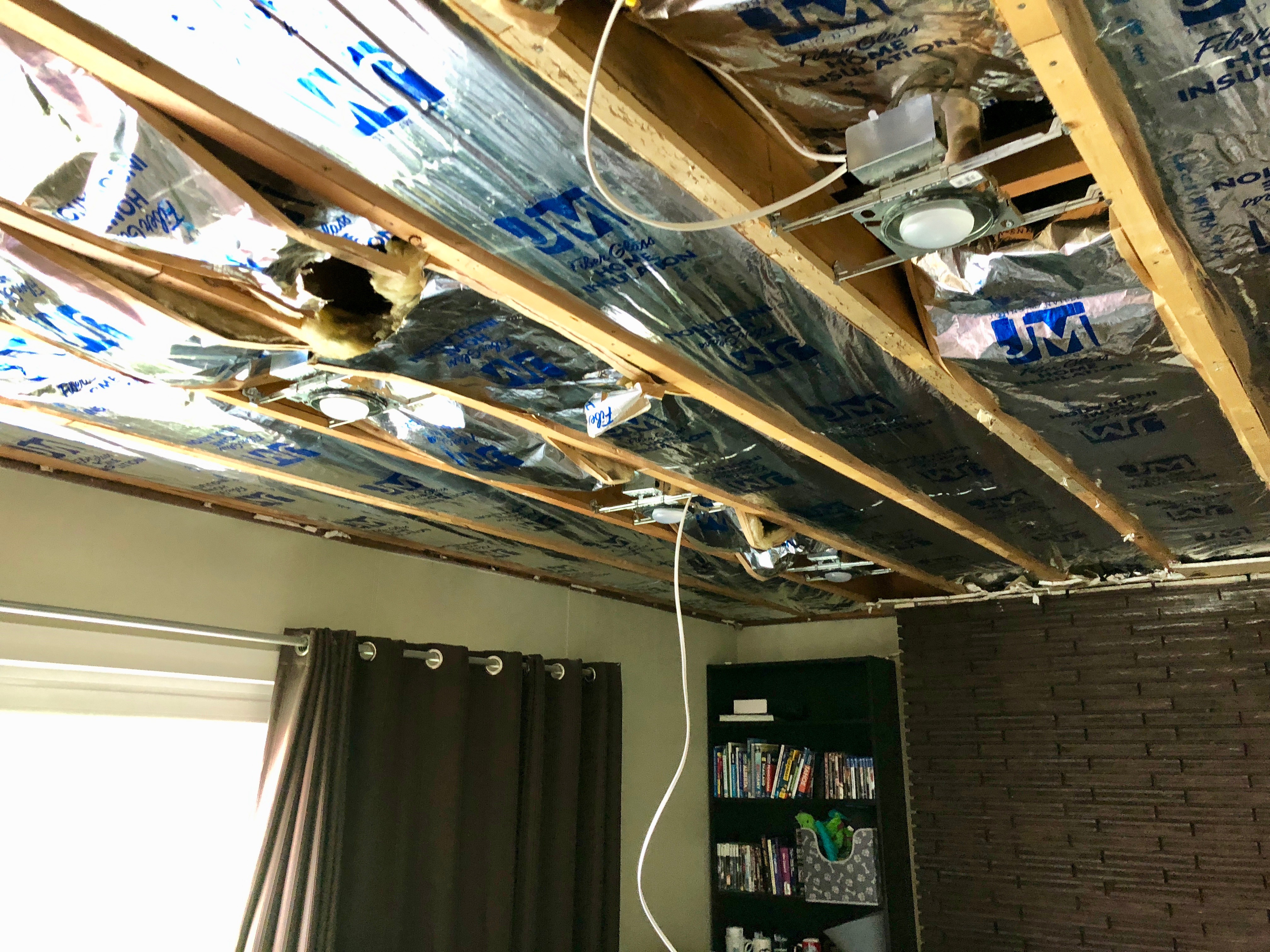 The house I’m living in was originally built in 1949. At some point, maybe the early-60s, they added on to the back of the house, but rather than adding a room that the house actually (desperately) needed — a master bedroom let’s say — they used the extra space to create the house’s third different living room.

Meanwhile, the kitchen was awful. Mostly just small, but also awful. Take a look if you dare:

That’s the entire kitchen. Here are a couple more angles.

Or the other direction, looking into the superfluous third living room.

Then here’s the old superfluous living room with fireplace and acoustical tile ceiling because classy.

Then this was the, I dunno, dining area that was sort of adjoining the superfluous living room? Or maybe it was all meant to be living room and I was dishonoring the architect’s intent (haha: architect) by eating in part of it.

I mean, at some point, this house just included too much non-thinking for me to be okay with it.

So last May (it was probably April, but the story’s more concise if we just call it May) I decided to do something about this kitchen situation and started tearing things down and out.

Look: the old kitchen probably looks fine in the photos (although that floor, those cabinets, that dark-ish paint — bad decisions were made). It didn’t function well, though, it was really cramped, walking into the house was hard to do while trying to maintain a sense of dignity, and the Feng Shui was notably poor. Anyway.

The renovation goal was to move the kitchen around the corner (to the wall shown in that last photo), put a window in that wall where there wan’t one (that would go over the sink), then turn the old kitchen into a laundry/mud room with some additional kitchen storage and counter space.

First things, I started tearing out the fake wood paneling that was covering the walls. Turned out it had been tacked onto what looked like reasonable-enough drywall. Also started trying to figure out how to insert a new window in a wall where there was no window.

I also took down the acoustical tiles. When I did, I discovered that, rather than doing what, like, you’re supposed to do and stapling the tiles to furring strips, instead the original owners had hung drywall in the ceiling and then glued the tiles onto the drywall using at least an at least quarter-inch think slathering of glue to do so. Net result: if I wanted to have a normal-person ceiling, I was going to have to rip down the drywall, since that was going to be a whole lot cheaper, easier, and better-looking than, say, trying to mud over the glue (which I was not going to be able to get scraped off).

Taking down these tiles also revealed that there had at one time been another light socket in the room, basically at the entry into the kitchen. Then, the original owners had put acoustical tile over the old light socket because, you know, that’s easier. Also interesting: they had taken out the switch, but had left the wires to the socket hot. I found this out when, while taking down tiles, my arm brushed into one of the wires.

I think it’s kind of good to touch a live wire once in a while, just to remind yourself you’re alive.

Also, it was at this point that I realized that the original owners of my house in Pittsburgh had done a really good job in constructing a good house, despite what the owner previous to me had done to it. That house had a couple issues (mostly one: everything was a little too small), but it wasn’t built stupidly. Anyway.

Once the wall panels were down and safely stacked in the back yard, I started going after the ceiling drywall.

Then, once that was out, started rigging up canned lights throughout the superfluous living room and kitchen-to-be.

For some reason there were shims on every single one of the joists. And then they’d also done some fun things like this:

Pictured above is one of the two weird eyeball lights that used to be over the fireplace. If you look hard enough, you’ll see that they nailed the can to the joist, and then put the shim (furring strip?) ON TOP of the joist (and the nail) so that the only way to get these old cans out was to either take down the furring strip or use tin snips.

I went tin snips, obviously, just for the sheer violence of it.

And it looks like I still had some paneling to take care of at that point. Which, after going to Switzerland and Germany, I apparently did (take care of):

That wall with the diagonal boards used to be the exterior wall of the house. The rectangle you see there was some sort of window. I kind of liked the way the wall looks there in a distressed 1970s ski lodge interior sort of way.

Removing the paneling also revealed this at the entry to the old kitchen area.

Which, in addition to the cool (1949?) wallpaper, shows that at some point someone ran wire from the light switch down to the outlet but outside the wall, then just slapped paneling on top of it and called it good.

A pragmatic people, the Cache Valley-ites of the post-war era.

Apparently it was ’round about that time that I called the plumbers out to plumb the new sink area. This is what it looked like when they were done.

Wait — I think that’s more like what it looked like when they were about halfway done and the one plumber was crawling around the dryer lint-filled crawl space trying to make pipes go places.

And that’s what got done in the first two months of this (so-far) 14-month project.