All the Floor Plans I Developed over the Last Year

I’m going to start having someone else build a house to my specification and on my behalf next month. I’m not sure why I became committed to this future, but it kind of happened about a year ago — I started looking for building lots and, more to the point, coming up with floor plans.

This post doesn’t include all the floor plans, just representatives of each creative period. These were all made with LucidChart, which has a pretty low barrier to entry, then ends up not having nearly enough tools to make bona fide (near-buildable) plans. Not actually recommended.

I didn’t buy the lot until last April, but I started plans before that. I wanted to get a lot suited for a walk-out basement, since, for some reason, I view those as the one true basement configuration. Also, I was kind of hoping to recreate the layout from my old Lehi house. I guess it was a starting point. 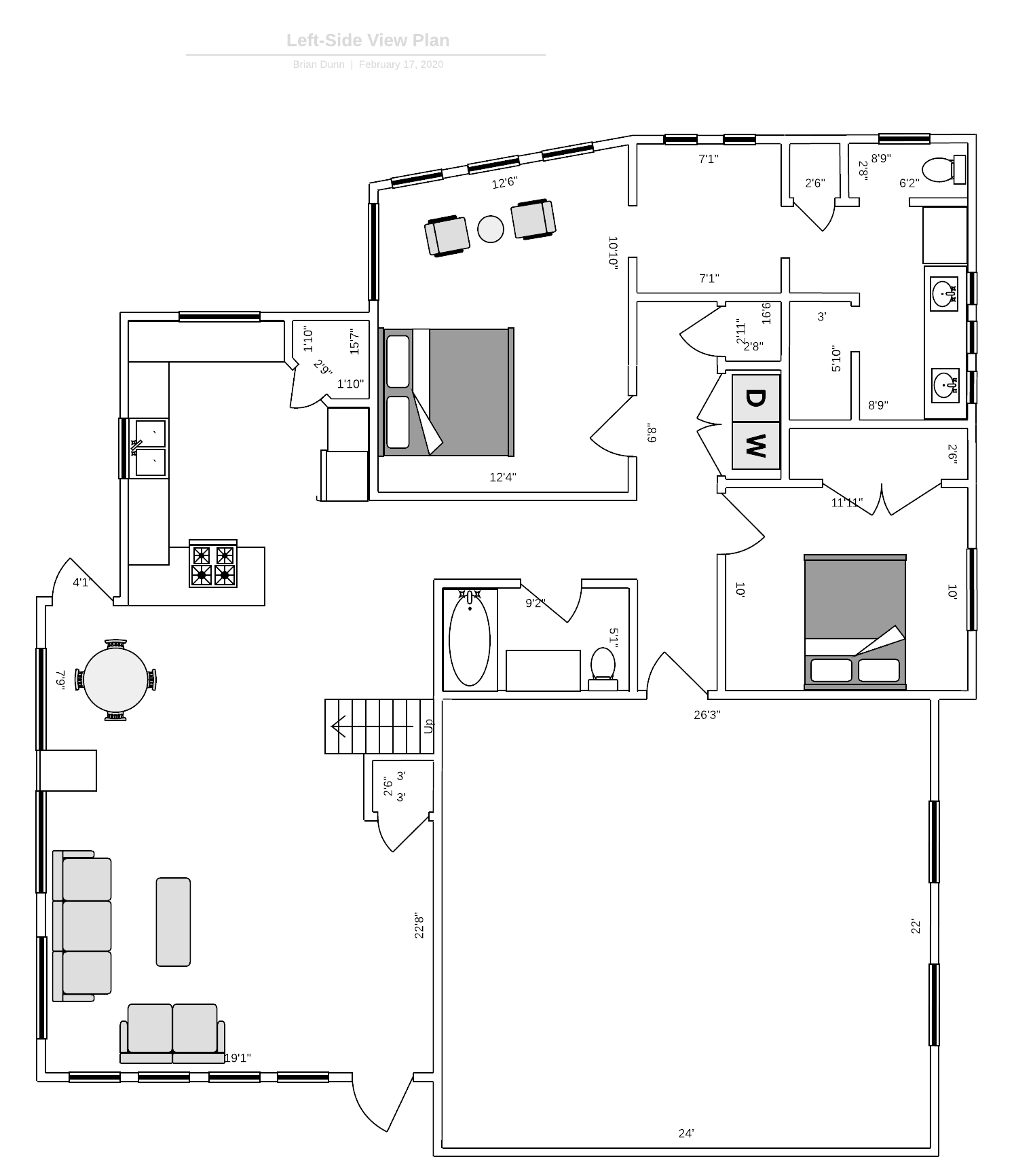 This was, apparently, at a time in my life when I thought you could fit a stairway into a five-foot space. And: I think I was sort of trying to recreate the floor plan from my Lehi house. 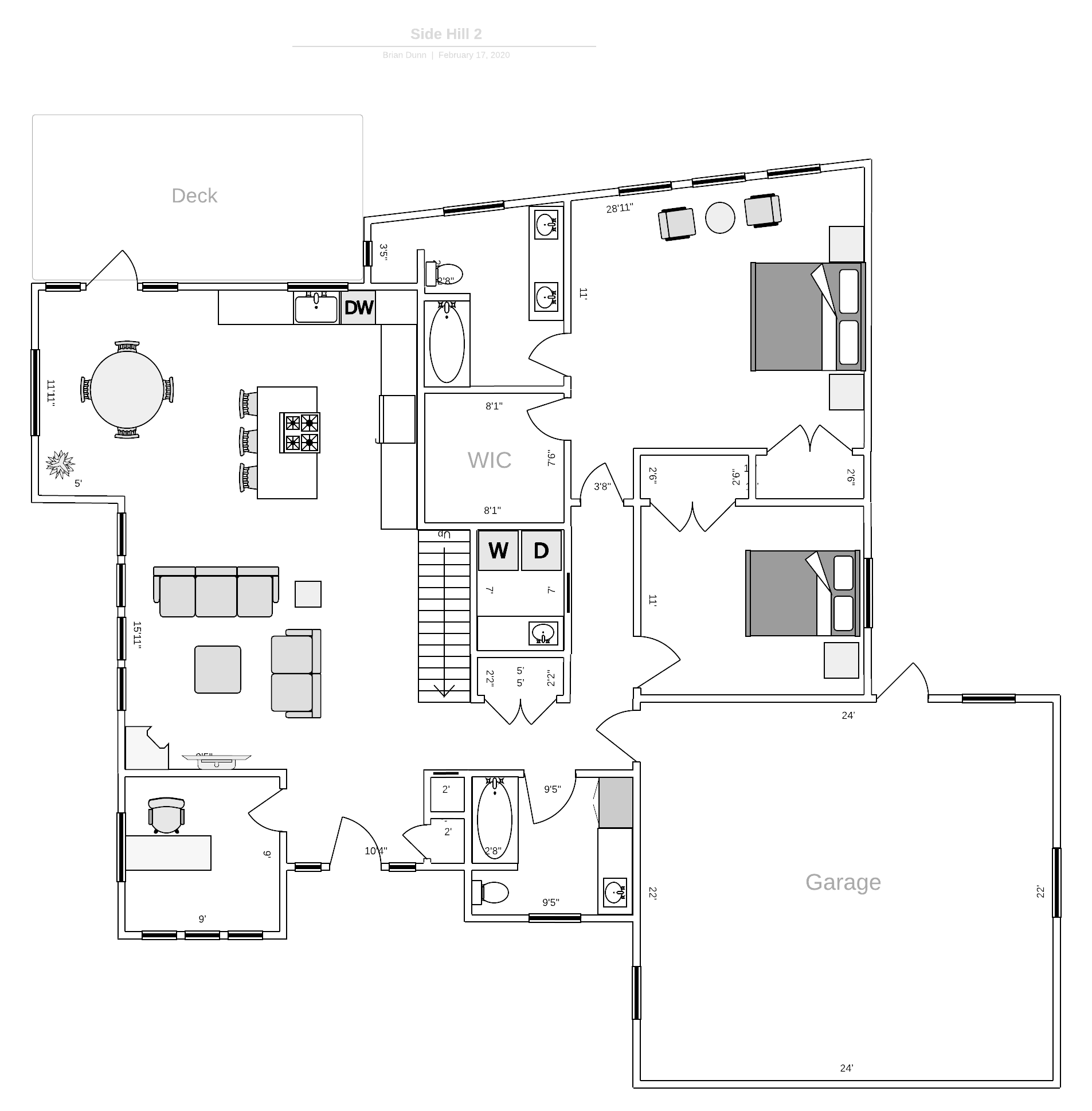 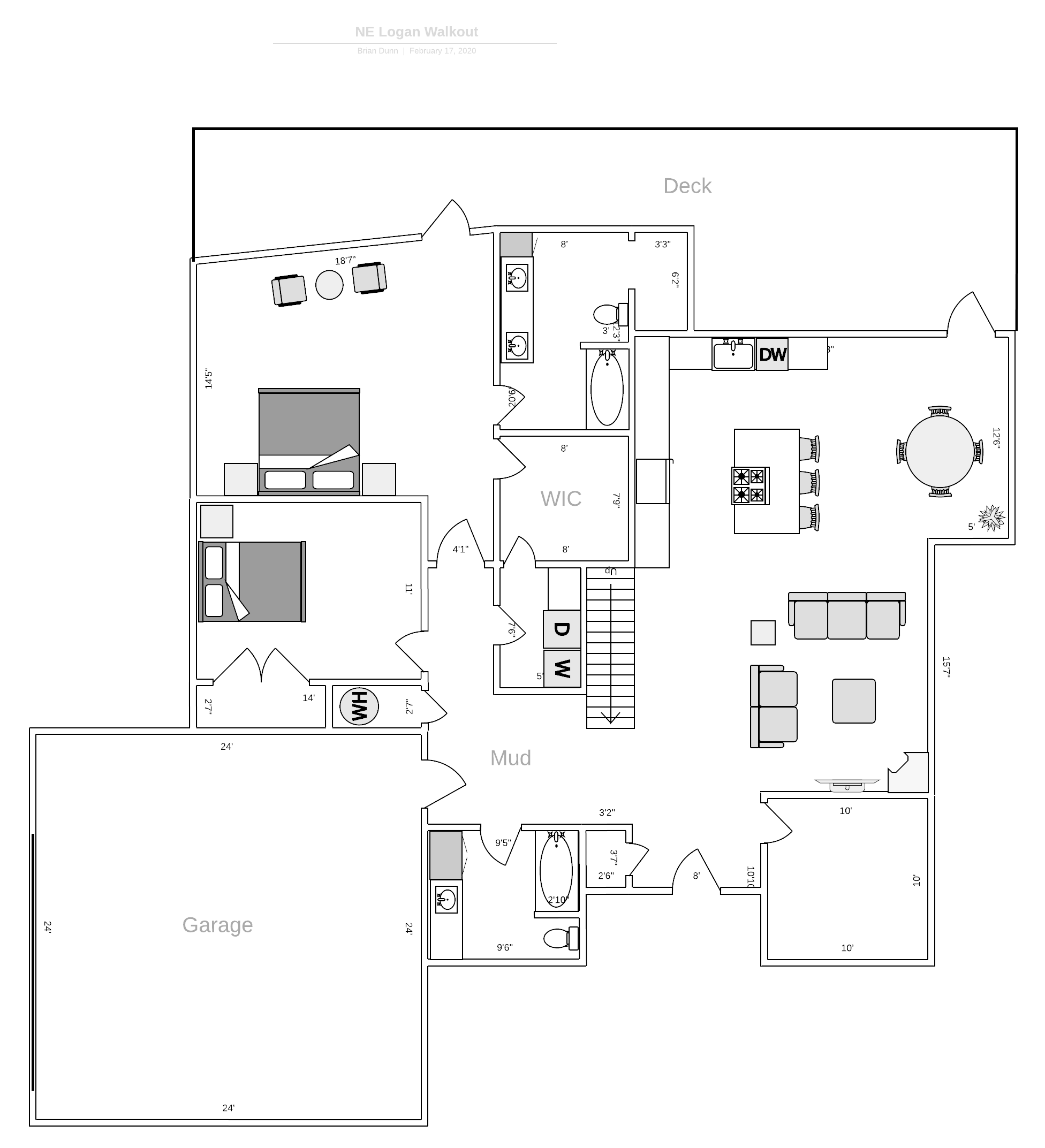 The Plans of Late Winter

Nevertheless, some time in early February, I think I actually settled on a lot in northeast Logan (not to be confused with east North Logan), which yielded the following. 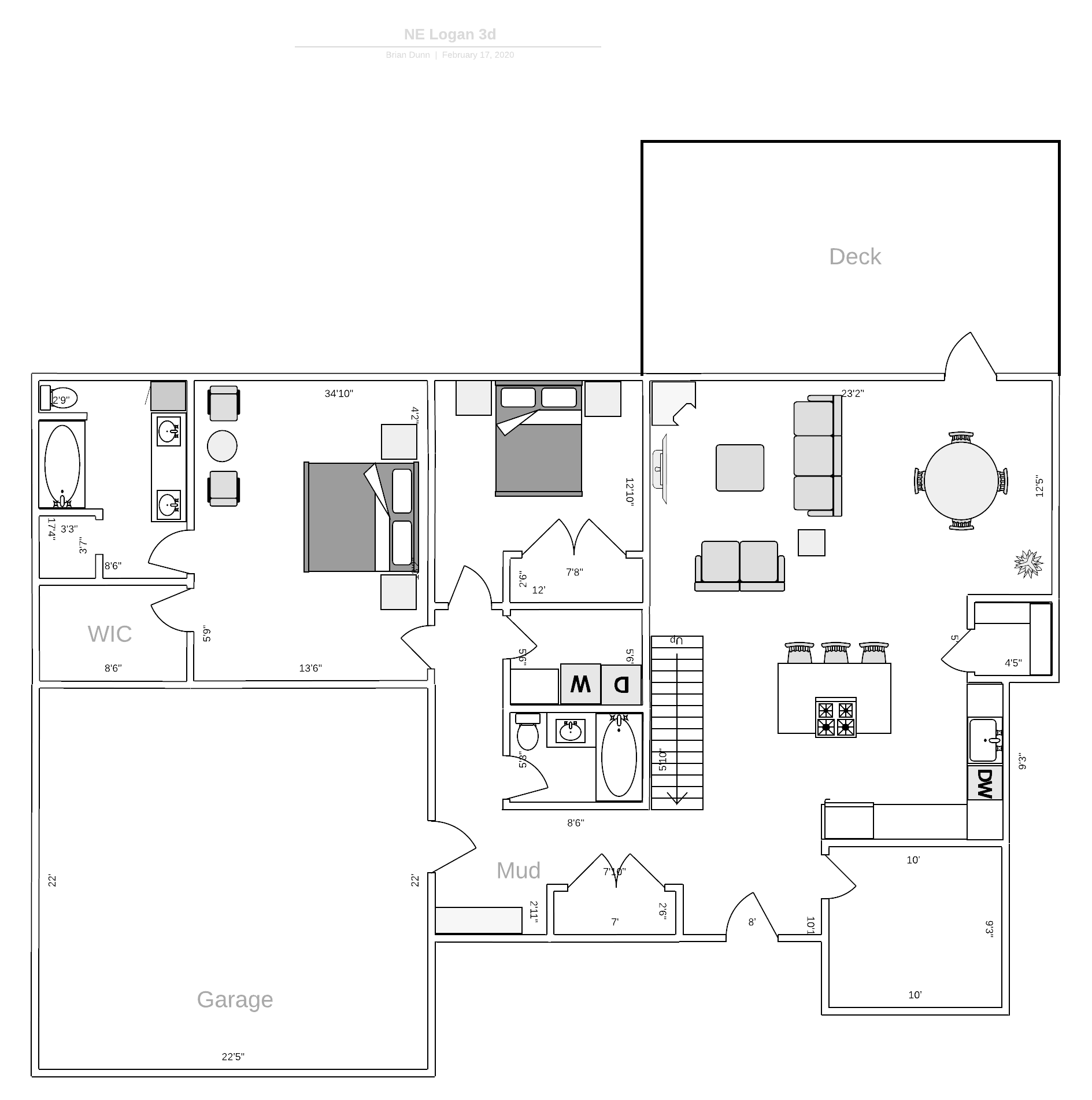 Too much hallway, straight into the kitchen from the entryway, master suite sharing a wall with another bedroom, etc. 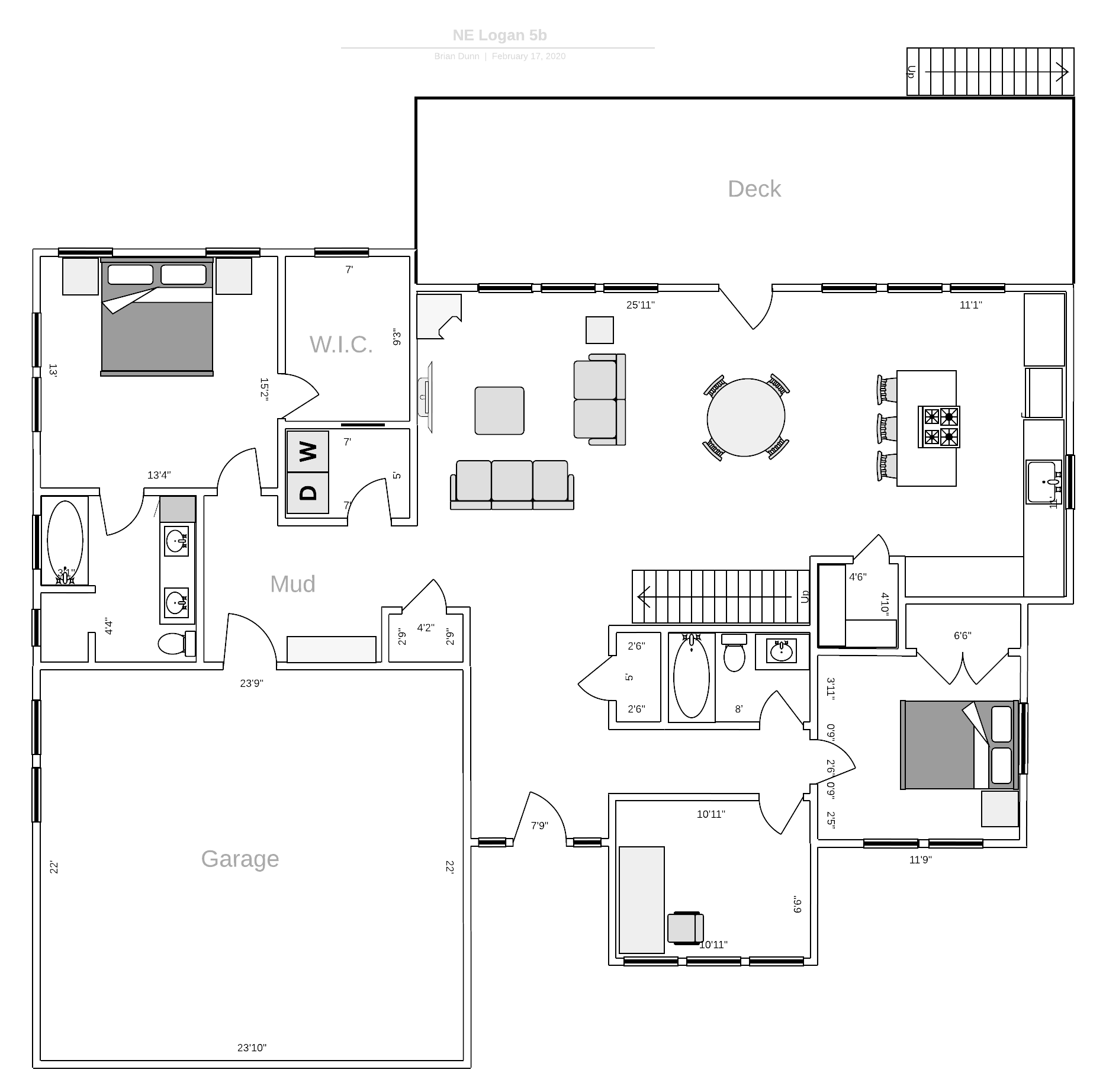 So there was someone at the time telling me I should go for max-deck. They might not have been wrong. OTOH, I’d eventually realize that the master had to be on the top-right corner (away from all roads — I ended up with a corner lot), and I think this floorpan wastes a ton of space. But I think I’ve lived in worse. 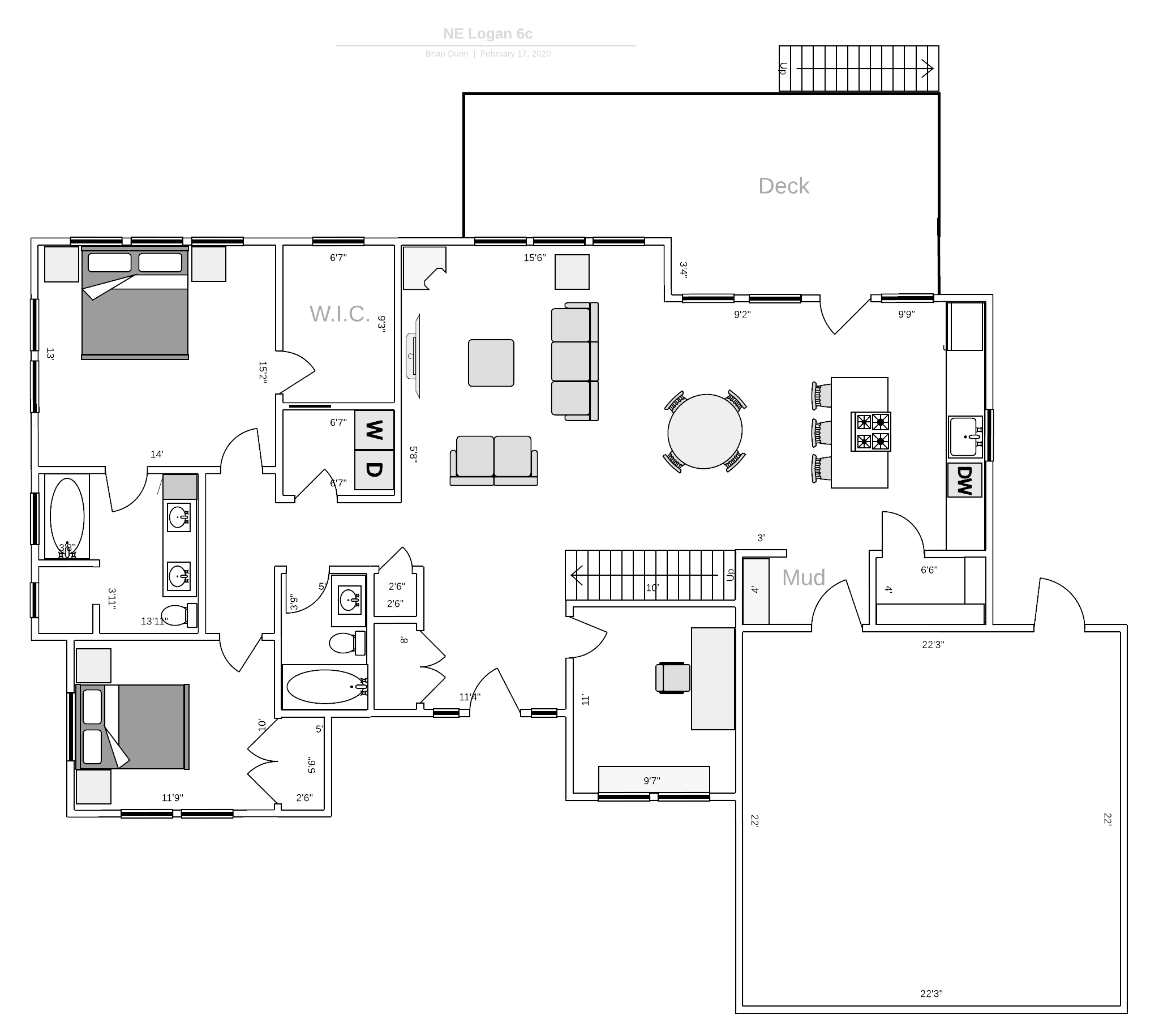 Part of me still wonders if that kitchen would’ve worked. And it still seems like a cool idea to have the pass-through between the master closet and the laundry room. RIP, interesting ideas. 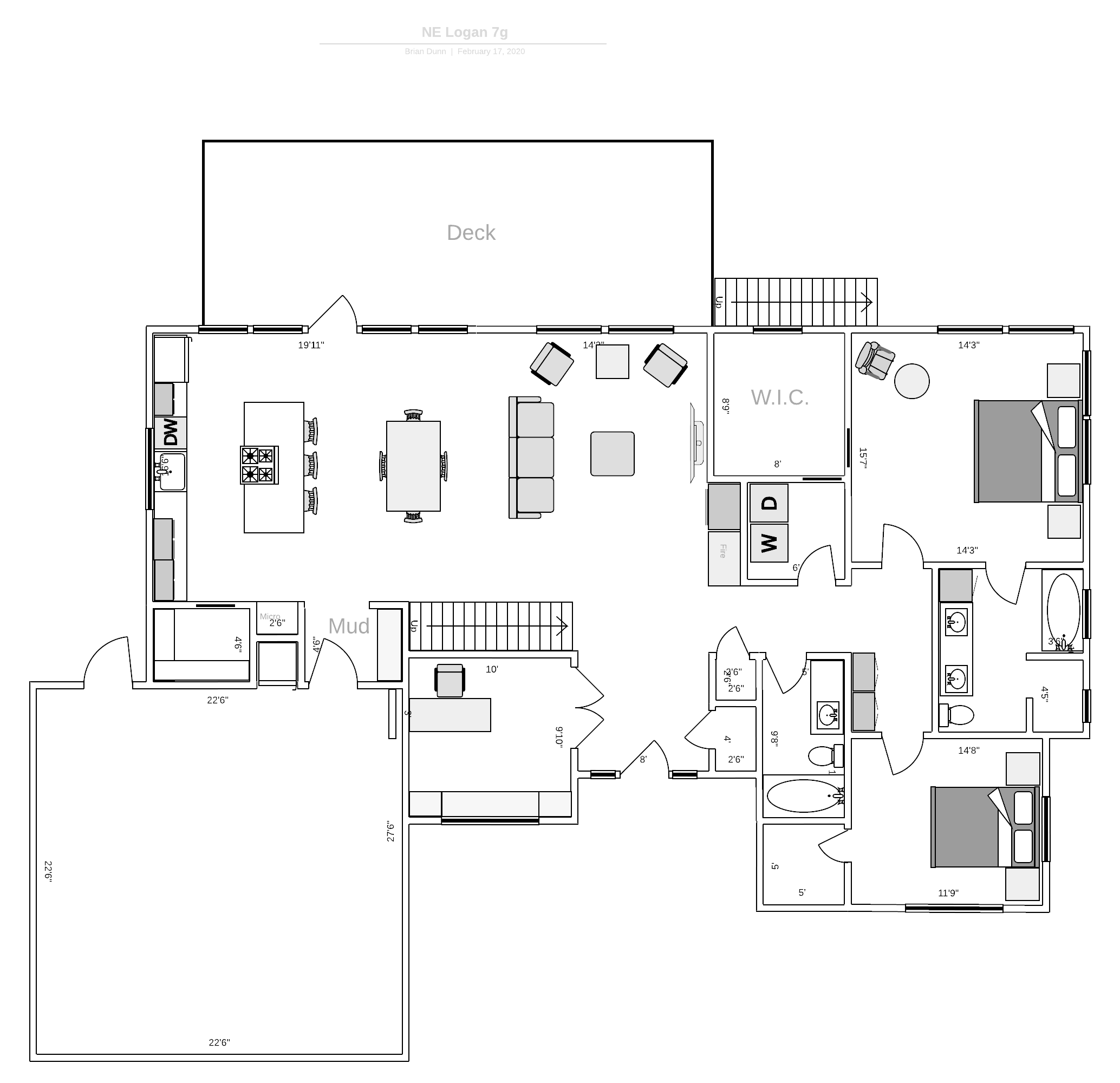 At which point I’d finally figured out how to get the garage and master suite into their correct respective corners. This one had some things going for it, though. Probably too much dead space at the entry and great room, but still. I did a couple dozen variations (not shown) on this one . 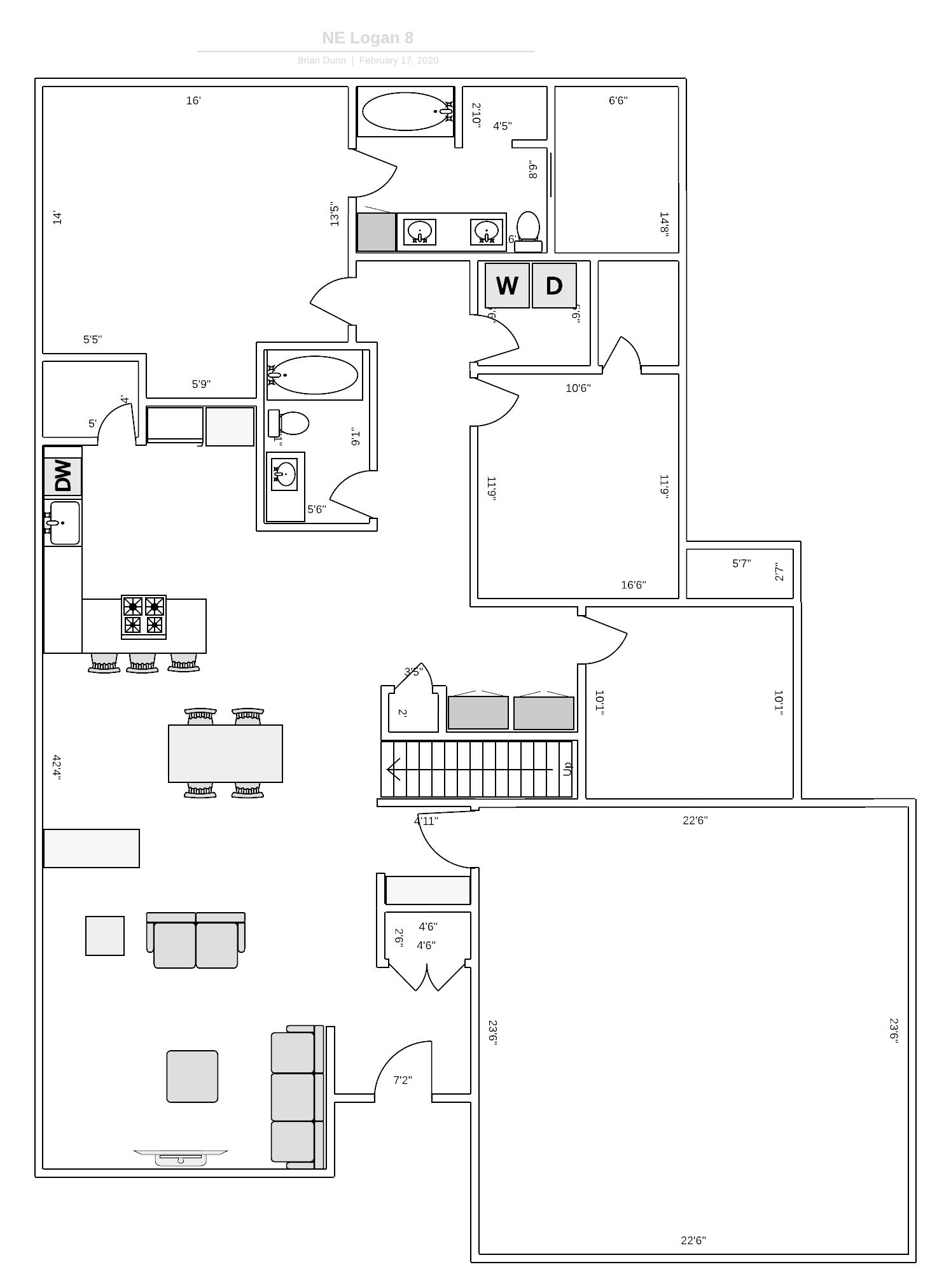 I think that’s the only version I did on that one, but at least it was different. It bravely dared to ask the question what if the front door were on the short side of the house? It would become a shotgun house, that’s what would happen. 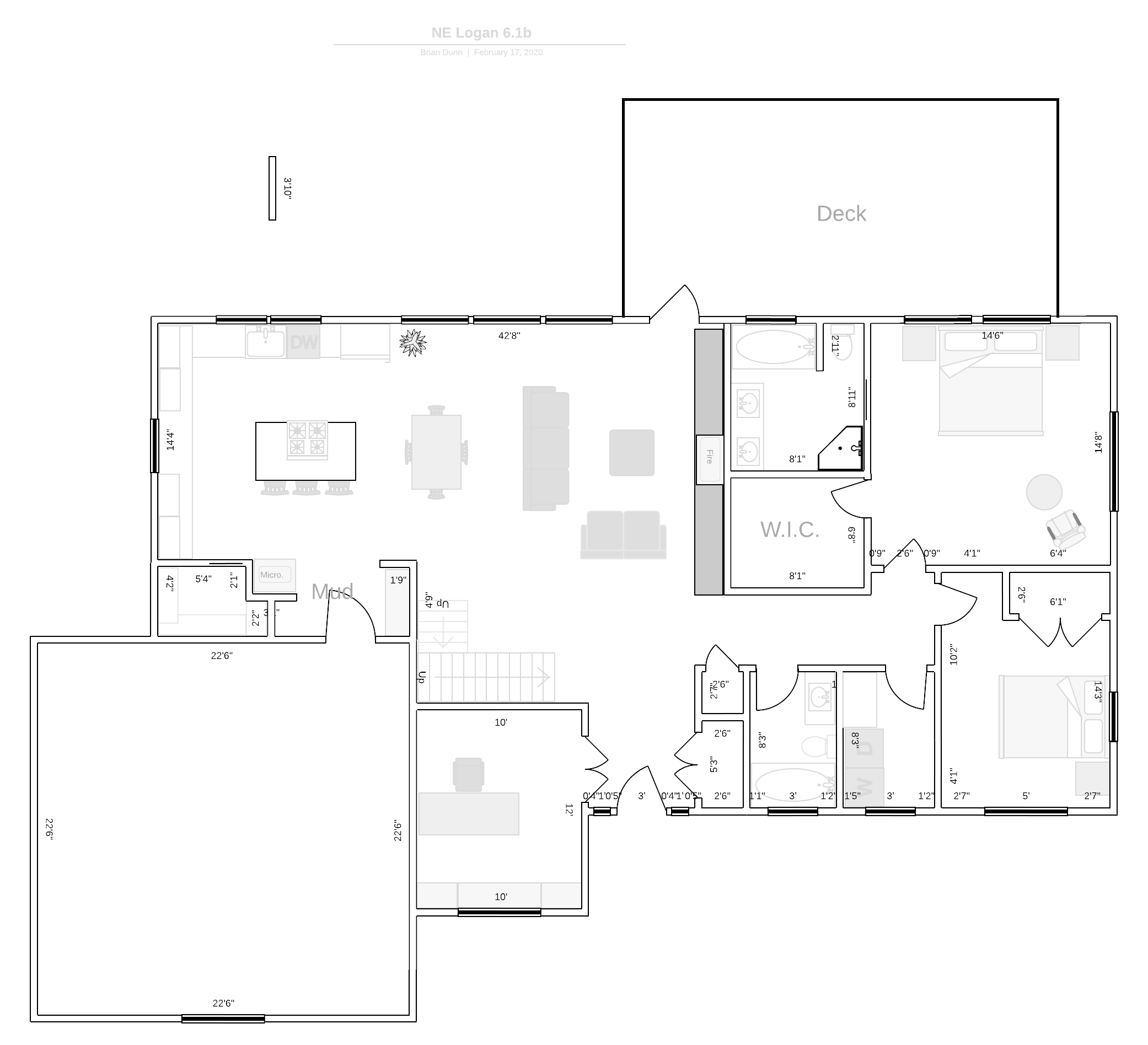 This one ends up having had some bearing on the final one that’s actually (probably) getting built — especially over there in the bedroom area. 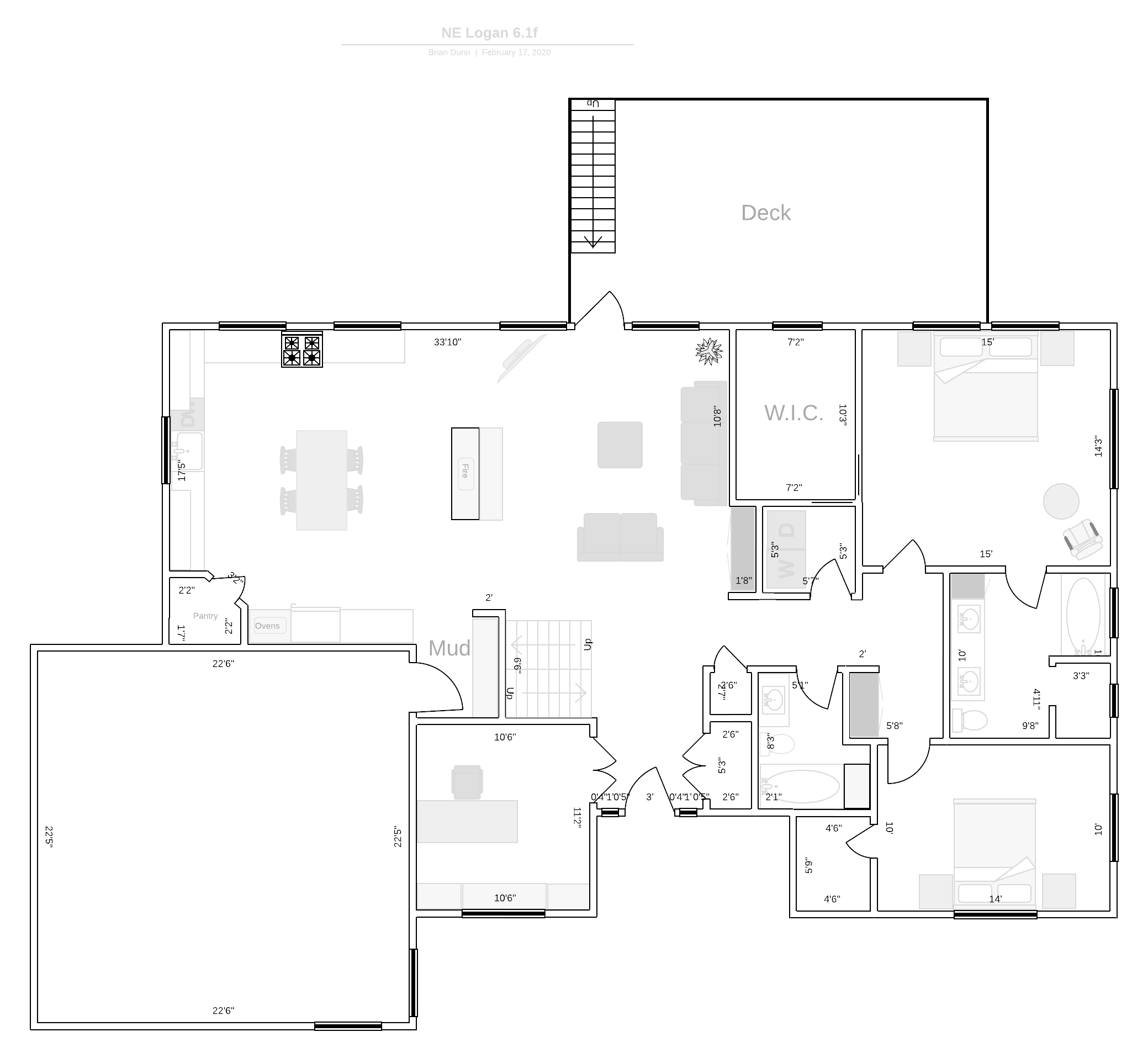 This is when I entered my fireplace-as-room-divider phase. As well as my shorter World’s Largest Kitchen phase. 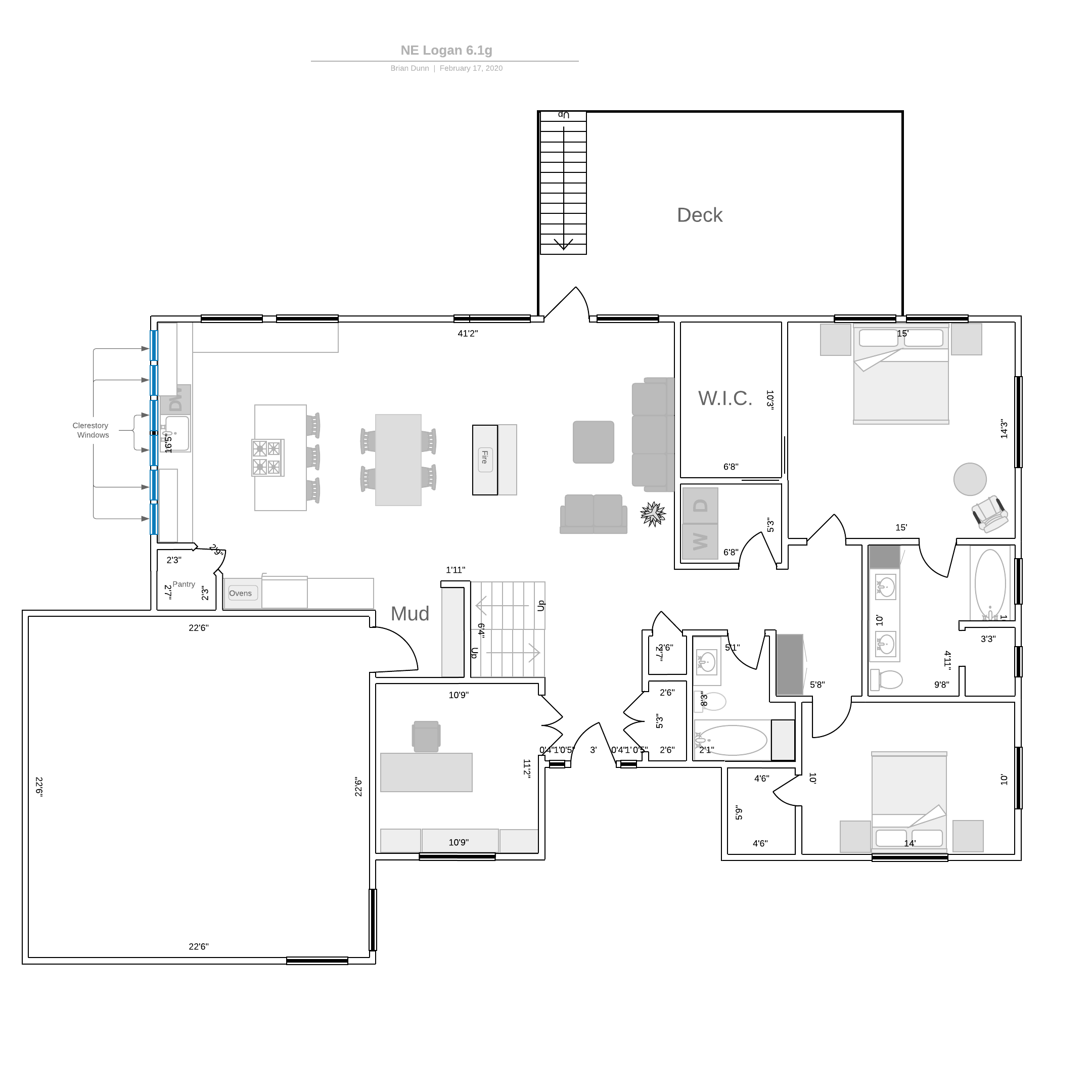 …which also included a south-facing clerestory window phase, brought on largely by the desire to use the word clerestory in real life. 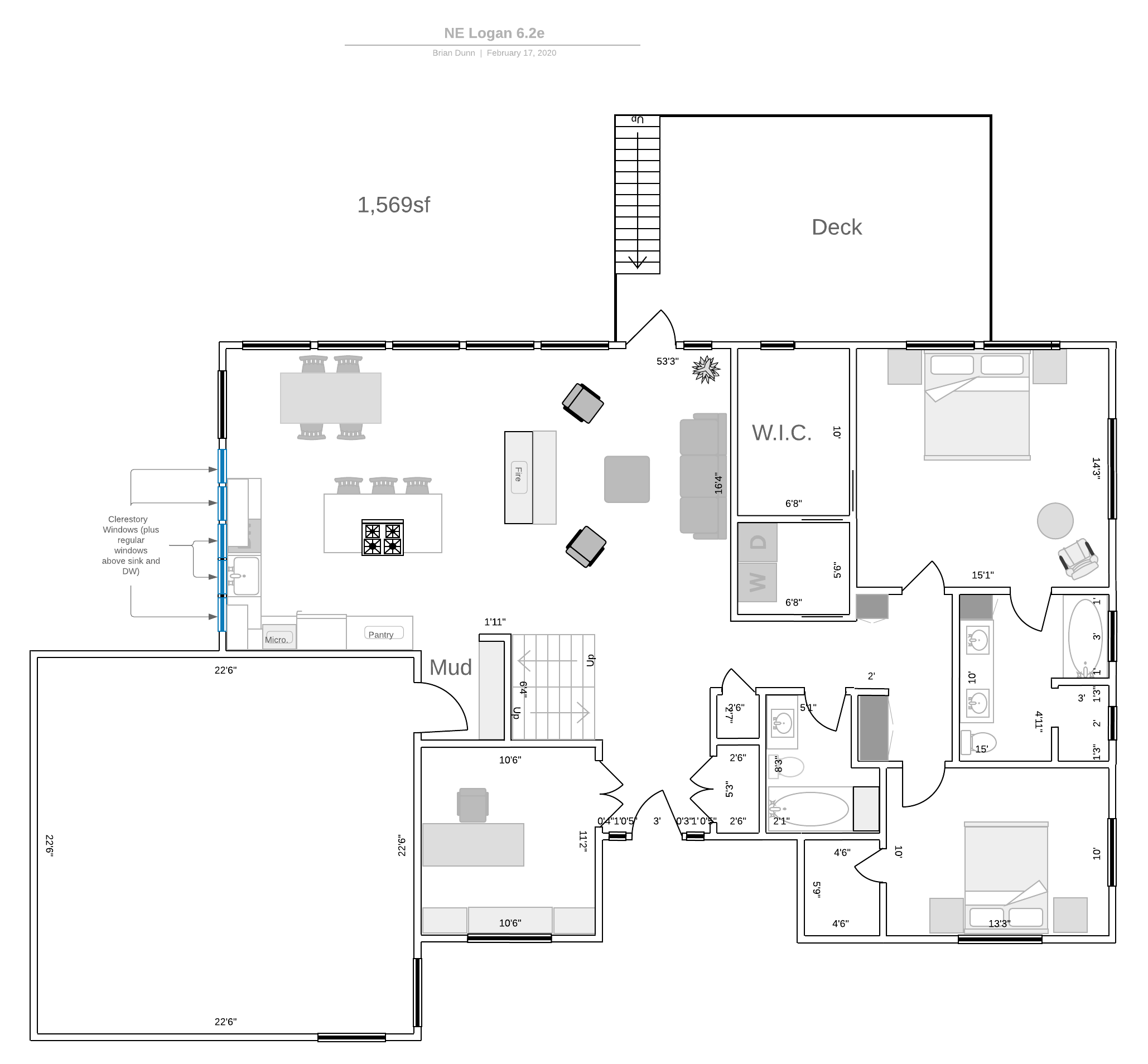 In-the-way fireplace still going strong, but I’d figured out how to get the kitchen table out of no-man’s land at least. 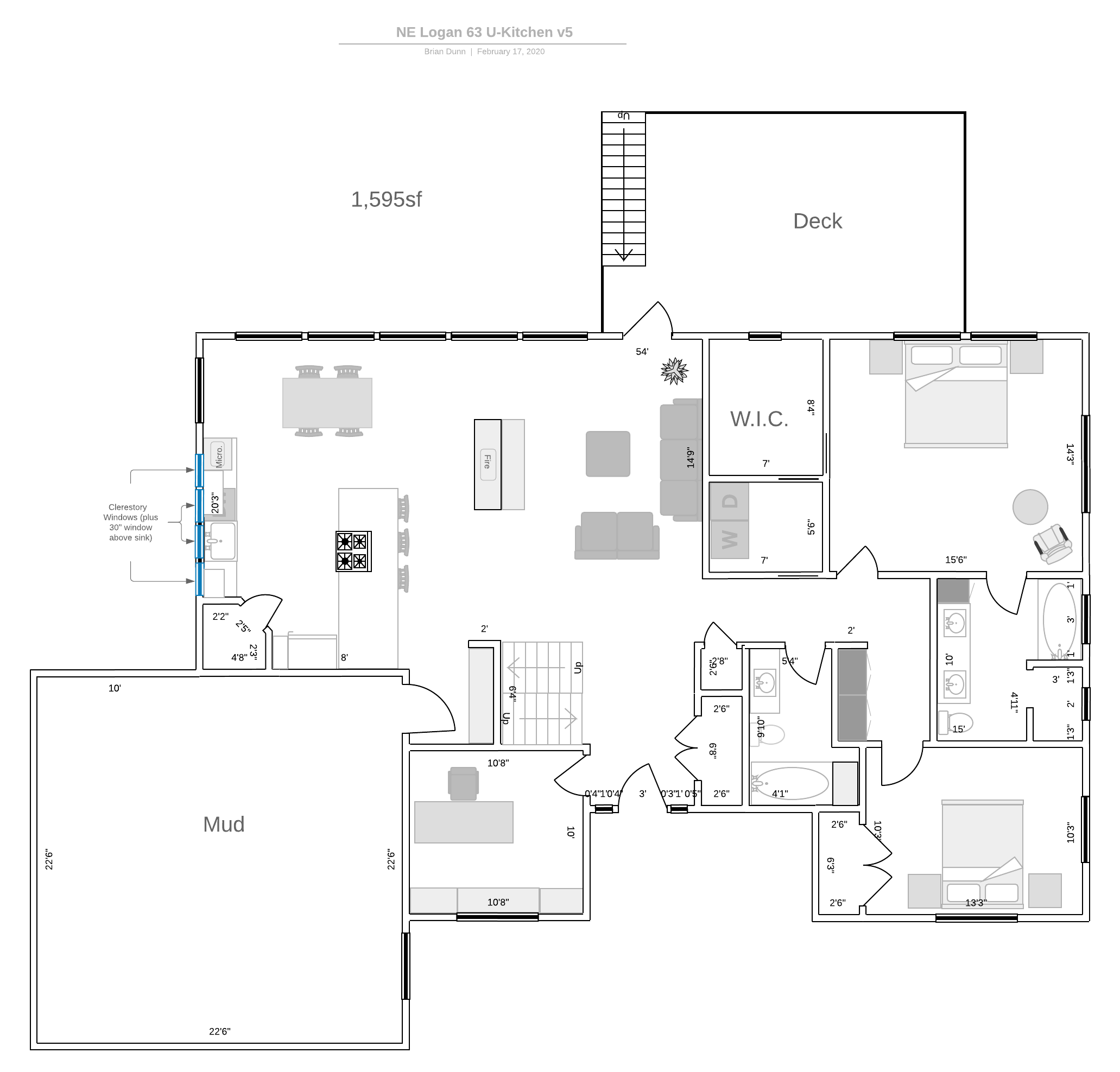 To celebrate my birthday last year, I drew six variations of this plan. I feel like the stairway landing is implied. It’s still less dead space than I had in my Oklahoma house.

Consumed by ennui, I needed to break out of the past forms and forge a new path that didn’t try to be the exact same as NE Logan 7g every time. Instead, I (eventually) tried to get everything pushed up closer to the street so as to help compensate for the steep-ish slope of the lot. 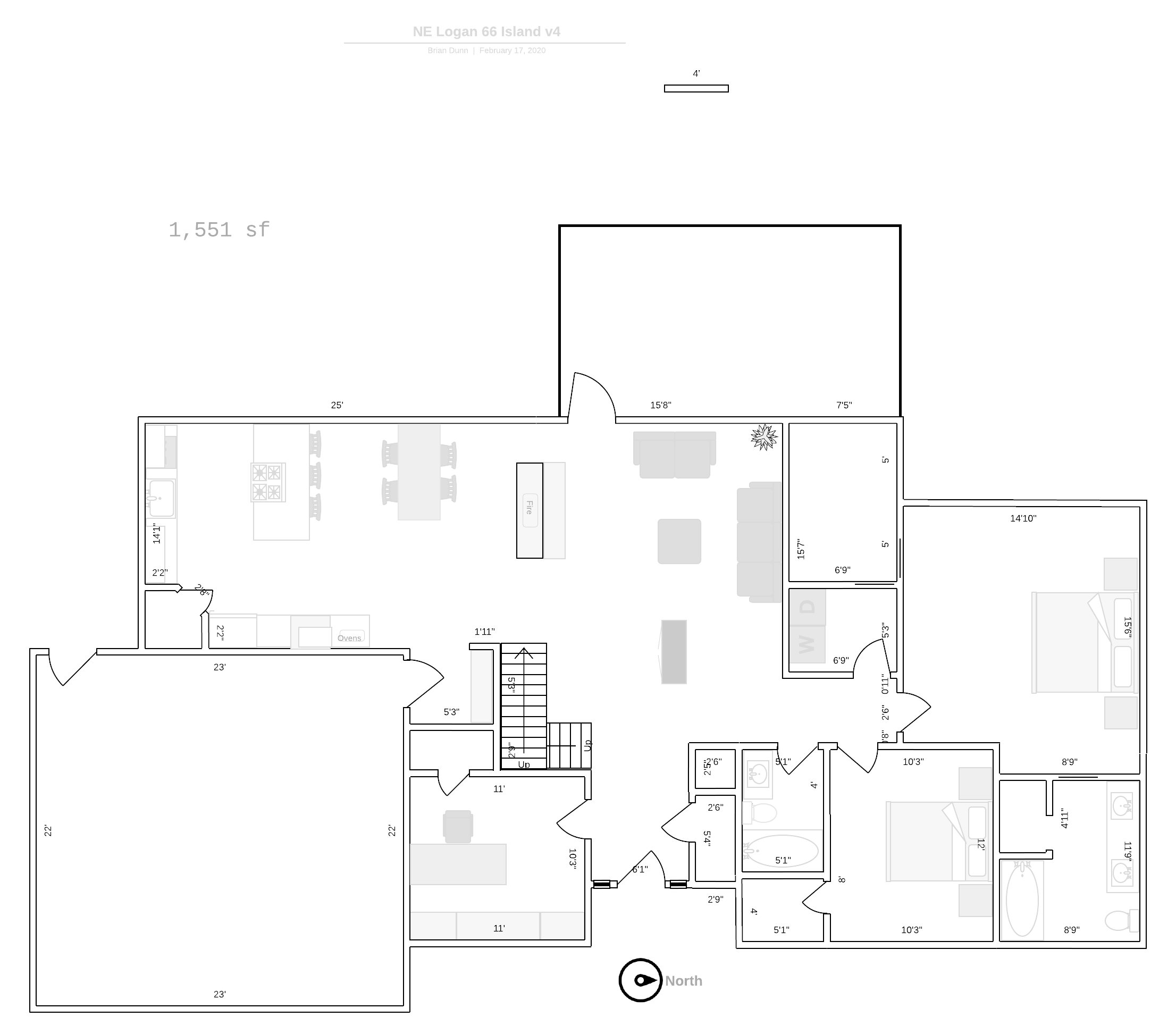 I was still at this point clinging to dreams of a third upstairs bedroom. I also thought I was getting close to the end.

For this one, I was inspired by some idealized mid-century architect’s floor plan that I found online — that’s where that bedroom pod at the bottom left is coming from. It’s not not cool, I don’t think. Possibly needed doors on the closets before it would be livable.

This one probably made more sense, just: huge. Also, the in-the way fireplace had, by this time, found a wall to which to connect itself. 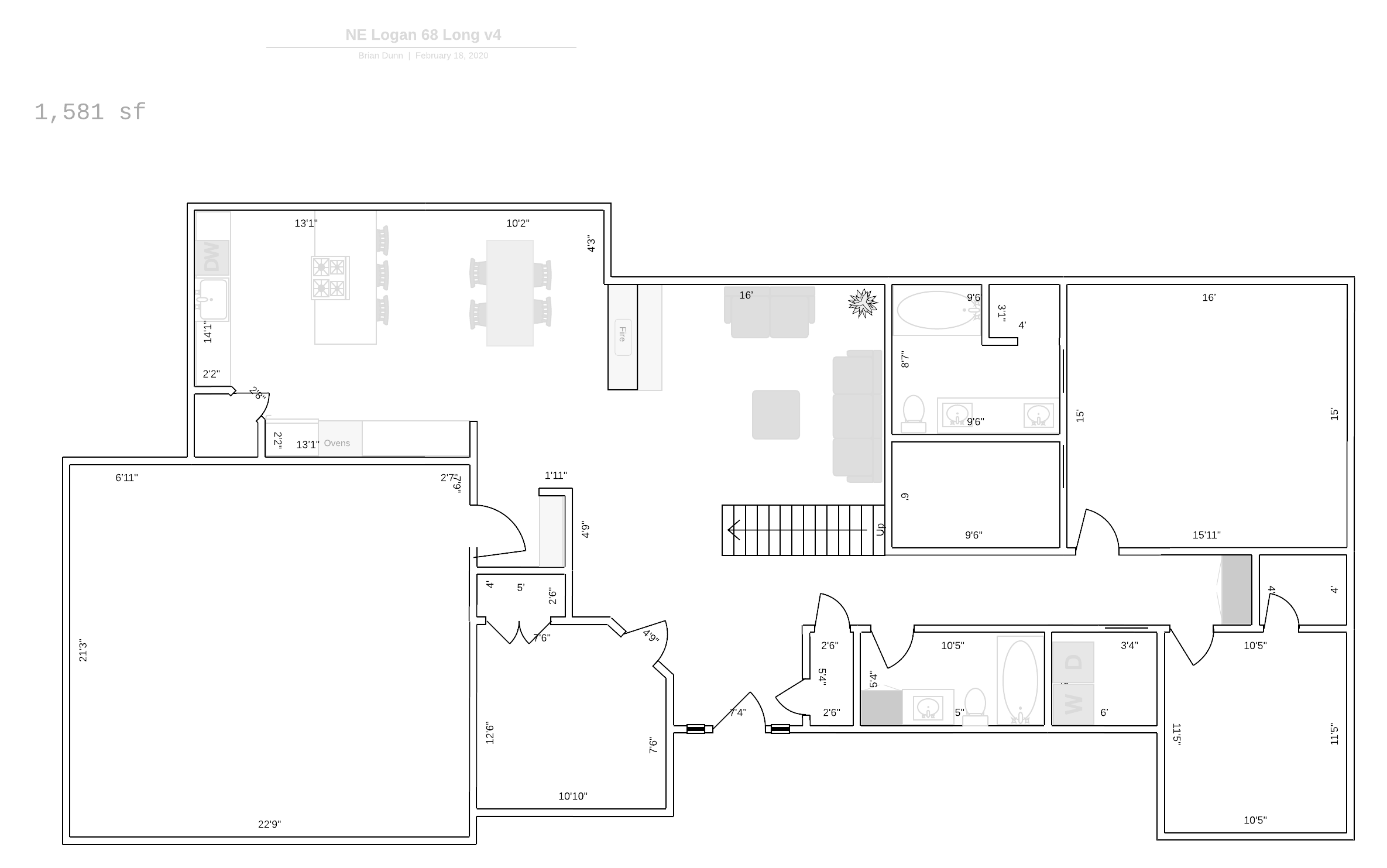 I remember thinking I was on to something on this one. Probably would have died of old age and/or dysentery on the walk from the bedroom to the kitchen though. 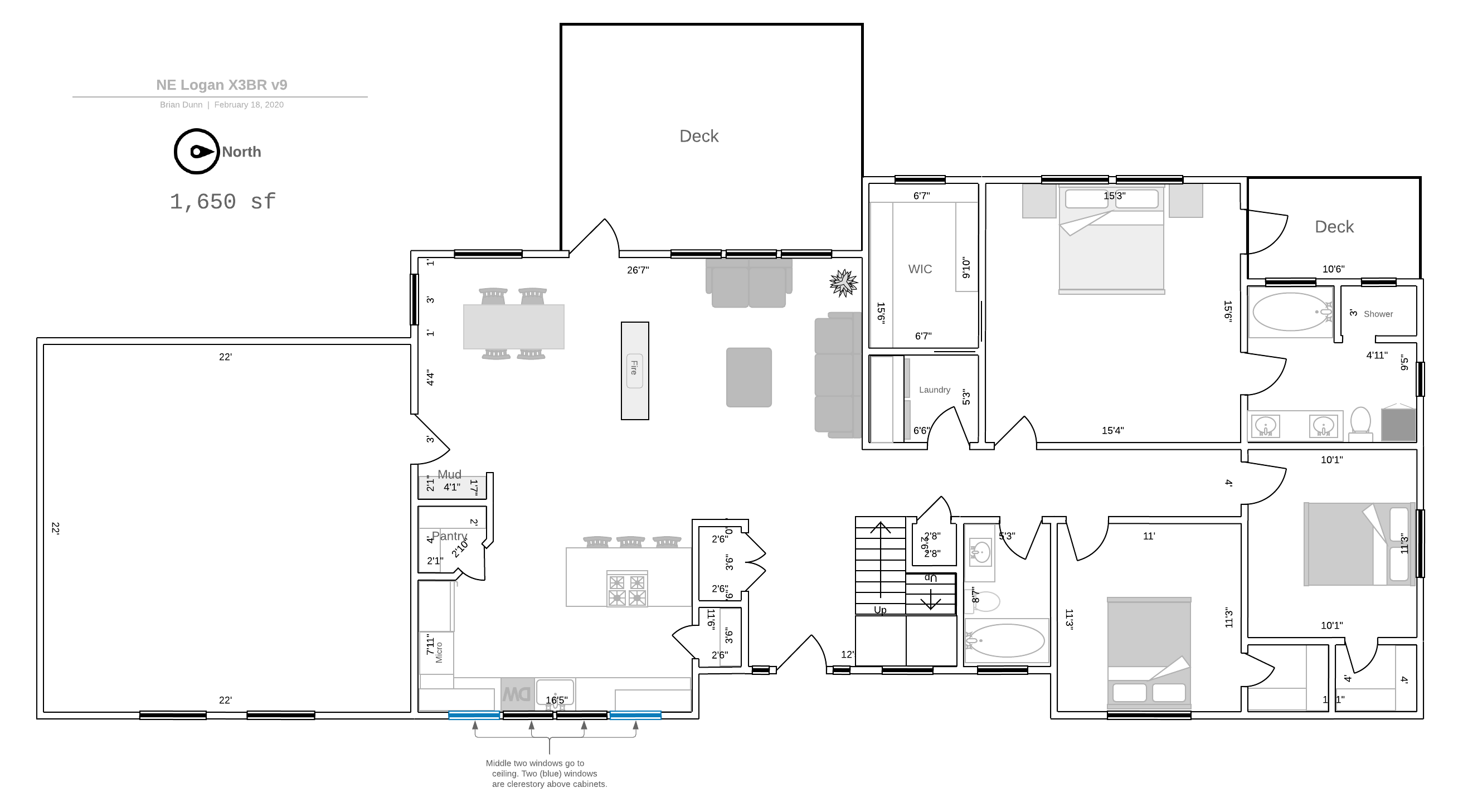 At which point I was sure I’d found the one. I was so sure this was the plan that I even bothered to put landings on the stairs. I miss the idea of that coffee deck off the master. I never would have used it, but still.

In fact, I was so sure that the previous one was The One that I started showing it to random people, at least one of whom pointed out to me that, since the only known would-be residents of this place would be me and a dog, pursuing two-bedroom options might make more sense and be more economical to build.

And then the detached fireplace made a comeback. 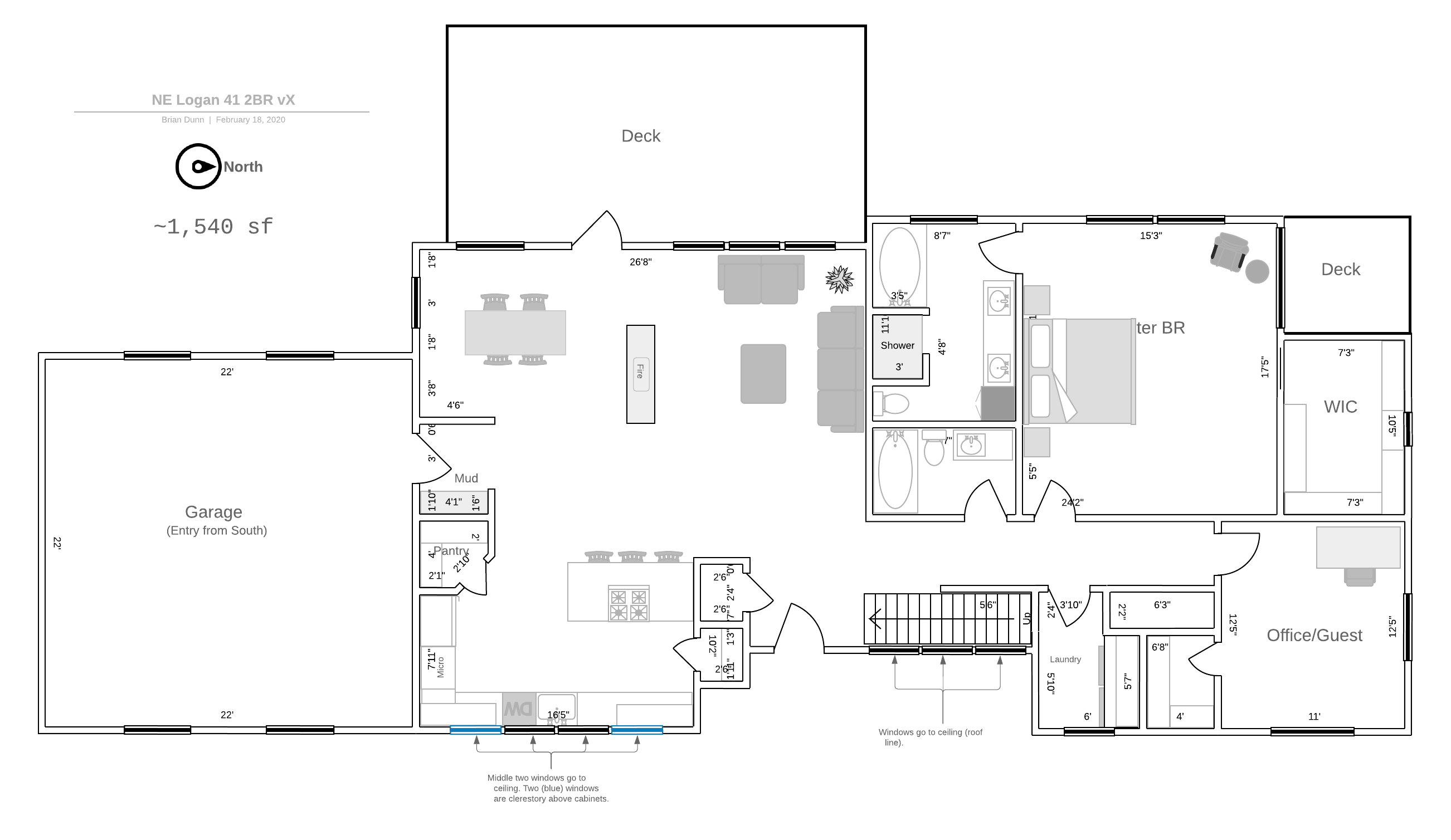 This one deserved a better fate. Going back through these is probably a cruel thing to be doing to myself at this stage in the actual project… 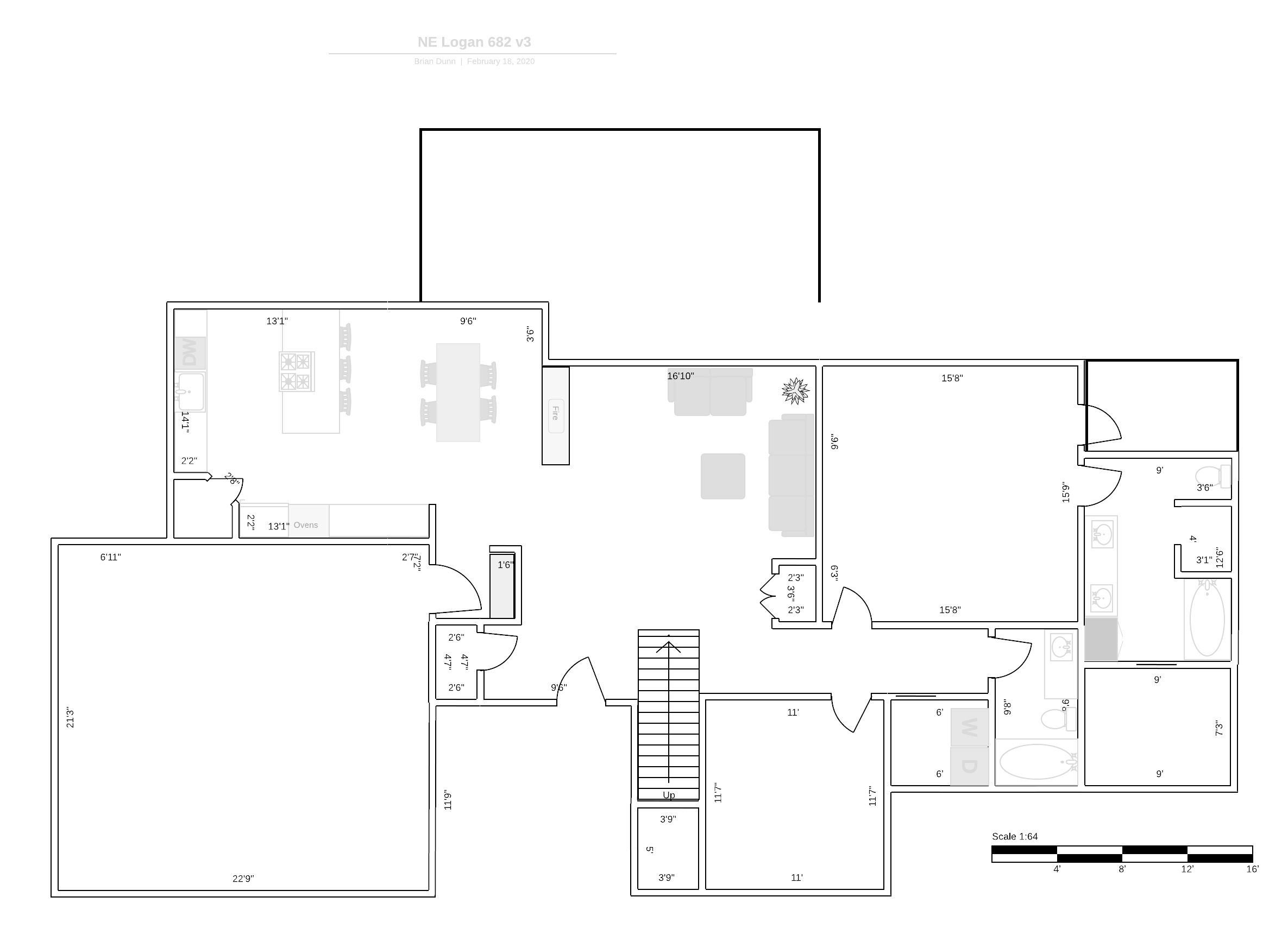 I wonder what would happen if I pushed the front door more to the left. 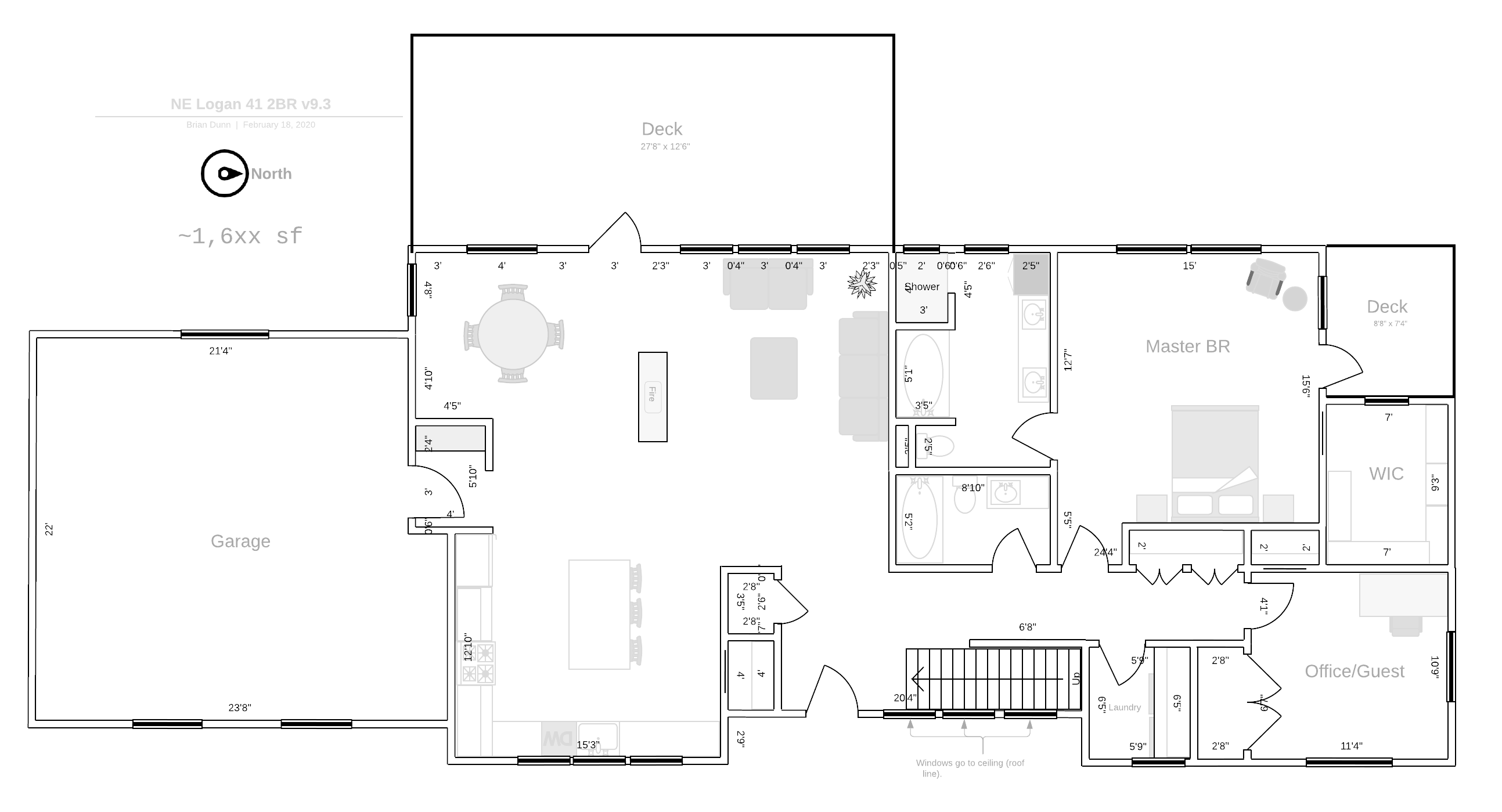 It’s probably 200sf bigger than it ought to be, but check out that hallway storage space…! 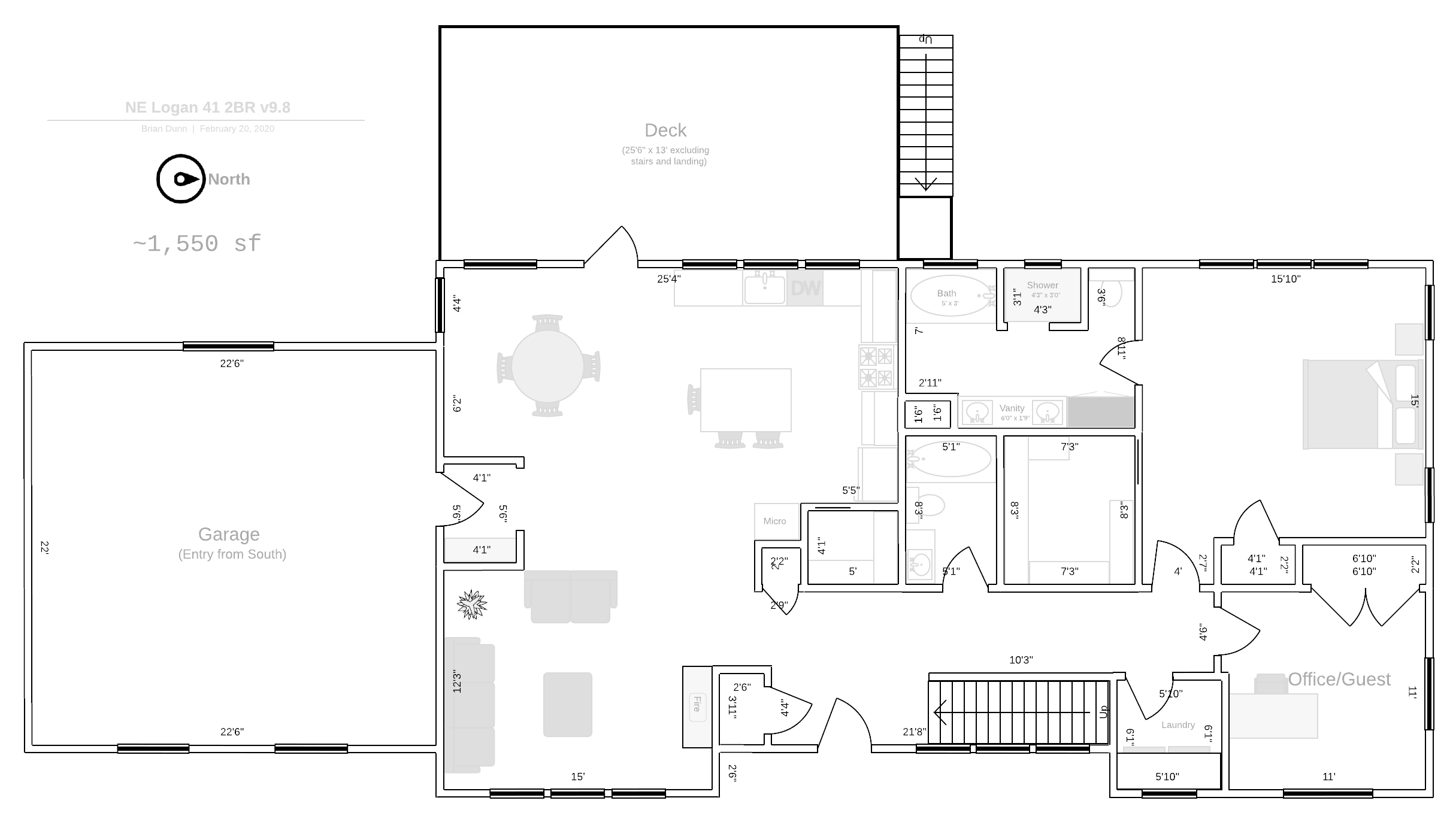 This was the penultimate design. In fact, at one point this was the design and it got sent to a draftsperson who did some mostly useless things with it. It then got bid out by a couple of builders who gave me insane prices for a 2BR with unfinished basement. That, then, prompted me to shrink the whole thing by 10%, yielding: 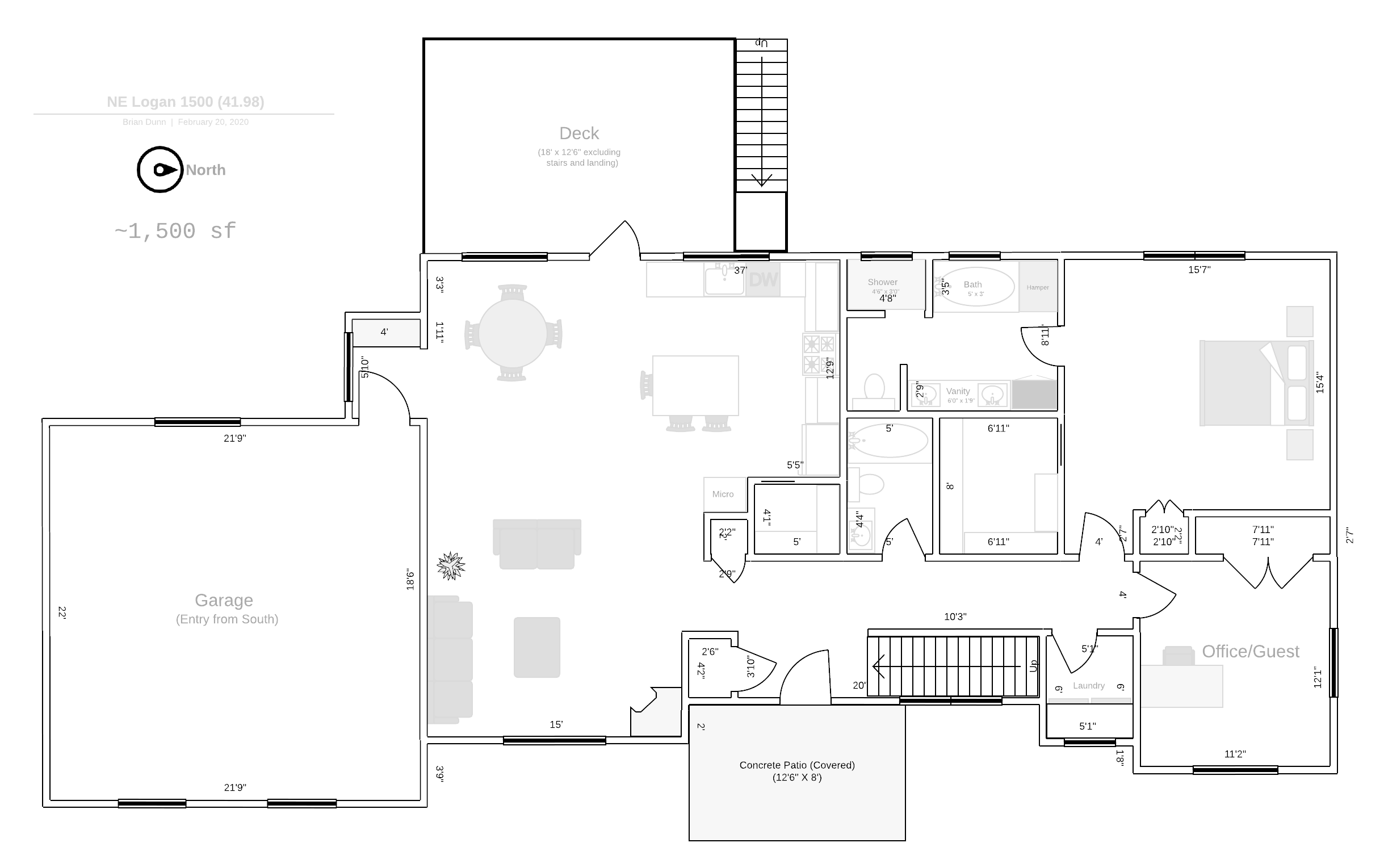 Which, after going back through all those older ones just seems so tame and boring now. Tame, boring, and going to be built. Somehow, reducing the footprint by 10% decreased the cost by 33%.

In total, I ended up creating 143 of these. Good use of a year. Thank you for participating in this floor plan journey.