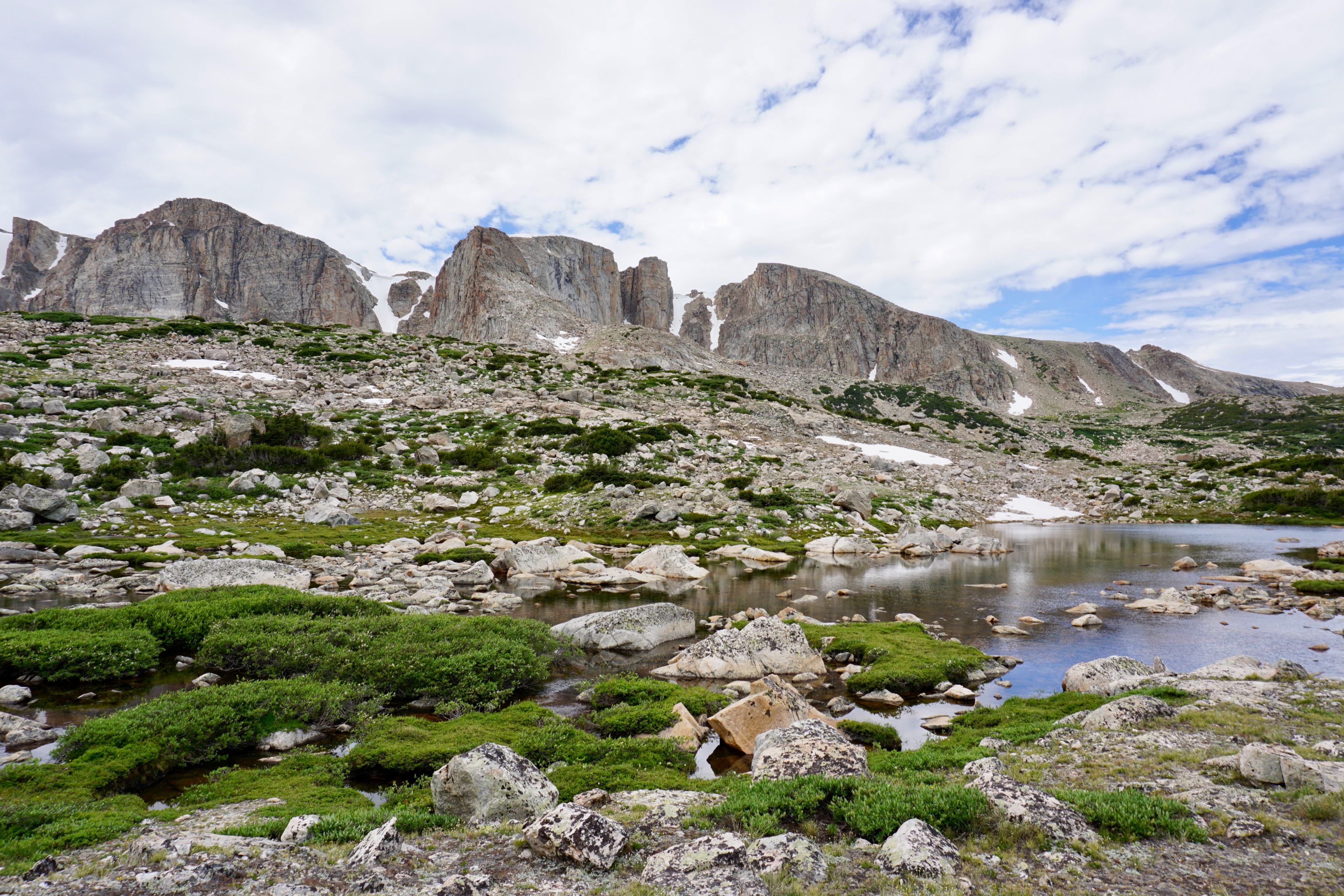 Did this trip over four days/three nights (July 24-27) as the High Adventure trip for the boys in the ward (these are Utah/LDS terms — can be replaced with “took a bunch of kids from church” as needed). The group and our arrival time in the eastern Winds dictated the route to some degree (it would’ve been more direct — but steeper and a longer first day — to just hike straight in to the basin). Started from Worthen Meadow Reservoir and went counter-clockwise via Twin Lakes to the Stough Creek Basin (Stough Creek Lakes Basin?), then home via the Stough Creek Lakes Trail. Was somewhere around 20 miles total.

Scenery-to-Effort Ratio: 1.7? The route in to the basin isn’t always stellar, but the basin definitely is.

Obstacles: Several creek crossings (three or four without bridges/logs), some pretty real elevations (we topped out at 10,500′ on the way to the campsite and explored to 11,000′), and a whole mess of mosquitoes.

Popularity: Pretty low for the Wind Rivers, especially taking this route through Twin Lakes. We crossed paths with two groups the first day, zero the second (! — although we saw a couple groups camping once we were already in the basin), and IIRC three the third. Pretty low. The scenery-to-popularity ratio for this route is extremely high.

Distance: 20ish round trip, depending on what we’re counting. It was about 5 the first day, probably 6 the second, then another 7 on the way out — but then add 5 or 6 for the basin exploration day hike.

We weren’t going to be able to get to the trailhead at Worthen Meadow till after noon, and given that our pace was going to be slow and a little stoppy, we opted for this route to the basin that didn’t require a lot of steep uphill. It’s hard to find many people who have hiked the Twin Lakes Trail specifically, but it was a-okay if also a bit of a tree prison at times. Route was easy to find.

Mosquitoes were, relative to the rest of the hike, not bad.

Ended up camping at a site that was just at the end of the Twin Lakes, very near the intersection with the Stough Creek Trail. I never took a photo of either of the Twin Lakes. They were tree-lined and unprepossessing, but probably deserved a photo. >shrug<. The campsite had a ton of good tent sites, you just had to be willing to hike uphill from the trail about 100 yards to get to them.

And then I slept badly, because that’s what I do in the backcountry.

Day 2 was designed to be our “hard day” — the one with the most elevation to gain. Fortunately, there wasn’t a lot of up-and-down on the Stough Creek Trail, so we didn’t give up a lot of elevation until we got to the final saddle at about 10,500′ and then descended only another couple-hundred feet into the basin.

The day started out with a fording.

And then a mile or so later, we started getting into the actual Wind Rivers Scenery.

Of course, the further we went, the worse the mosquitoes became. Man, but there were a lot of mosquitoes on this trip.

We forded the creek one more time, then made our final, relatively steep assault to the basin’s saddle.

And then entered the basin.

A lot of our group were pretty done-out from the climb up to the saddle, but a few of us went ahead and scouted out campsites, eventually finding one at the far end of the basin’s second lake in. It had some good tent sites, plus good access to moving water.

This basin is pretty amazing. At first it seems like there are just a few lakes in there, but the deeper you go into the basin, the more lakes you discover. Every time you head up a ridge, you see a couple new lakes connected by creeks to the lake you just saw. Heading to the back of the basin was outstanding and, visually speaking, the highlight of the trip.

Heading out, we completed the loop. The scenery on the way out was more interesting than on the way in.

And then back to the cars, then to Lander for an epic session with Domino’s Pizza. Plus all the kids survived, which was a bonus.