The Vicinity of Moab and Me: An Attempted Rapprochement

Southern Utah isn’t my place. It’s great for 12 hours or so, but then I want water and a color outside the orange-to-red part of the spectrum. Or, at least, THAT’S WHAT I THOUGHT.

These slot-ish canyons are right near the BLM primitive camping sites just outside Goblin Valley State Park. It’s a fun hike. A little dry, I guess, but the occasional slick rock scrambles are entertaining, and, if you haven’t seen red rock in a couple years, it’s pretty. 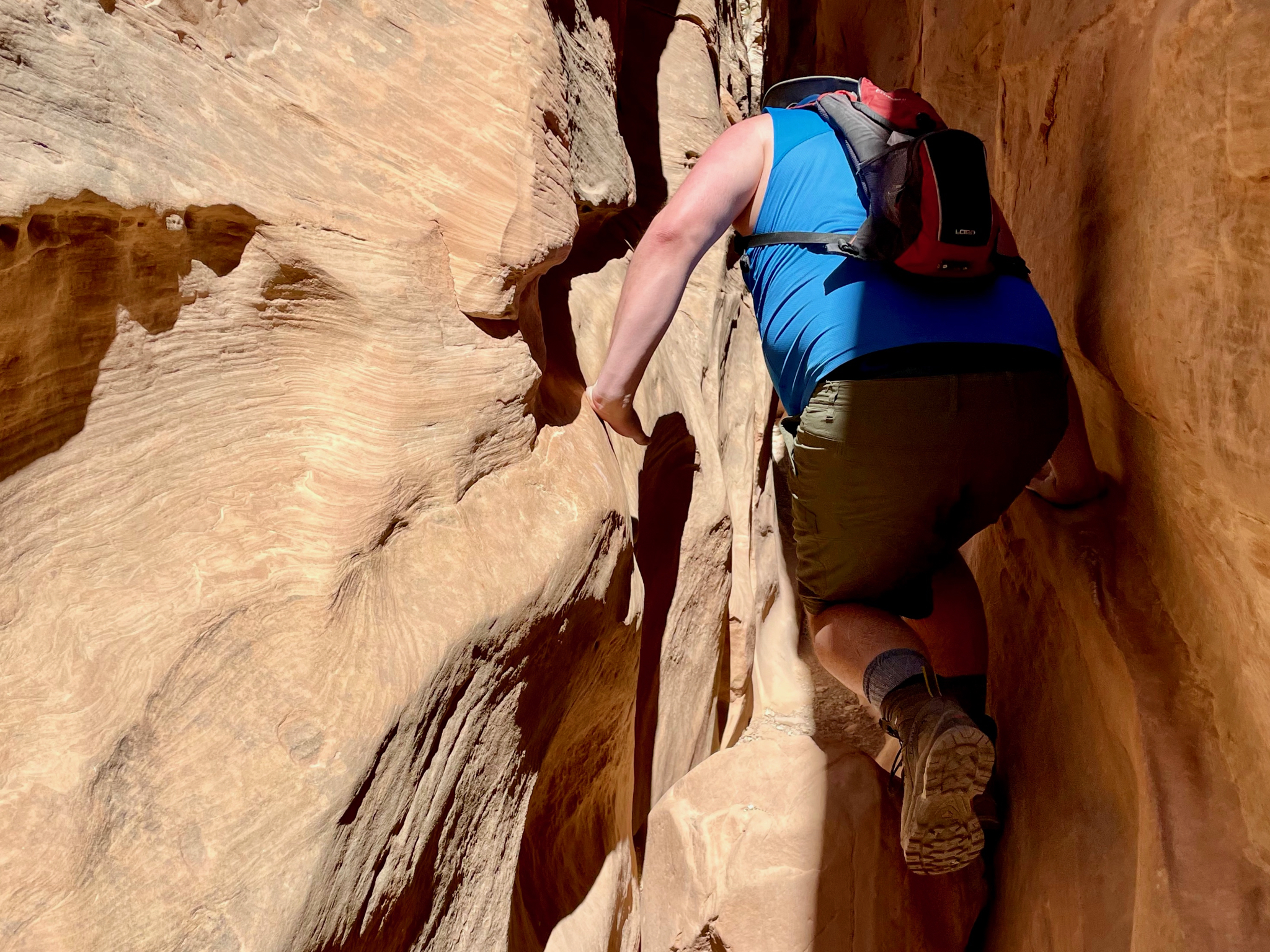 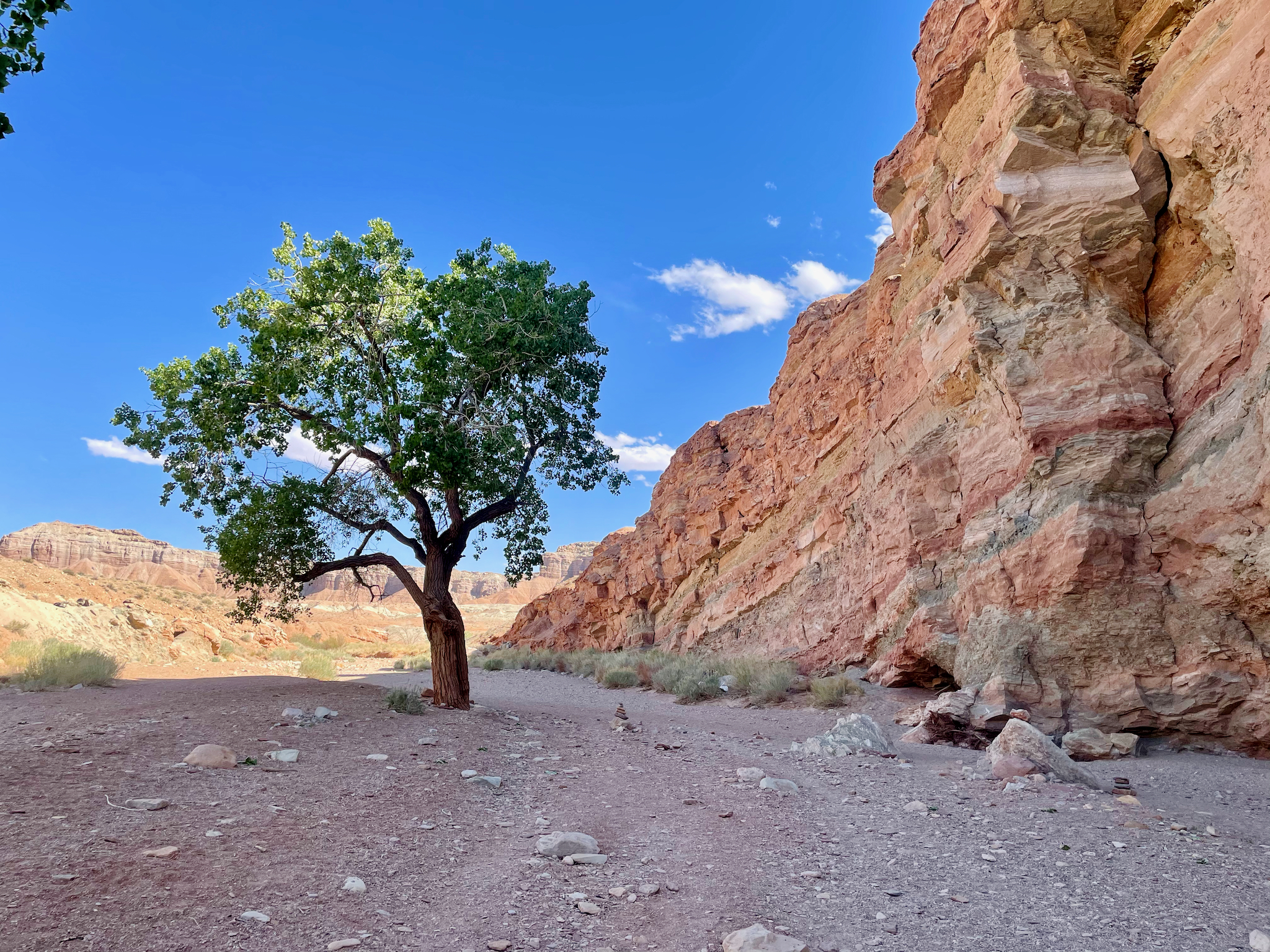 That night, we stayed at Robber’s Roost (a hotel) in Green River. It was shady, but we didn’t get murdered. The most interesting thing about Green River is that the highest-rated restaurant is a taco truck at a closed-down gas station hanging out under a roof being held up with electrical tape (see below). 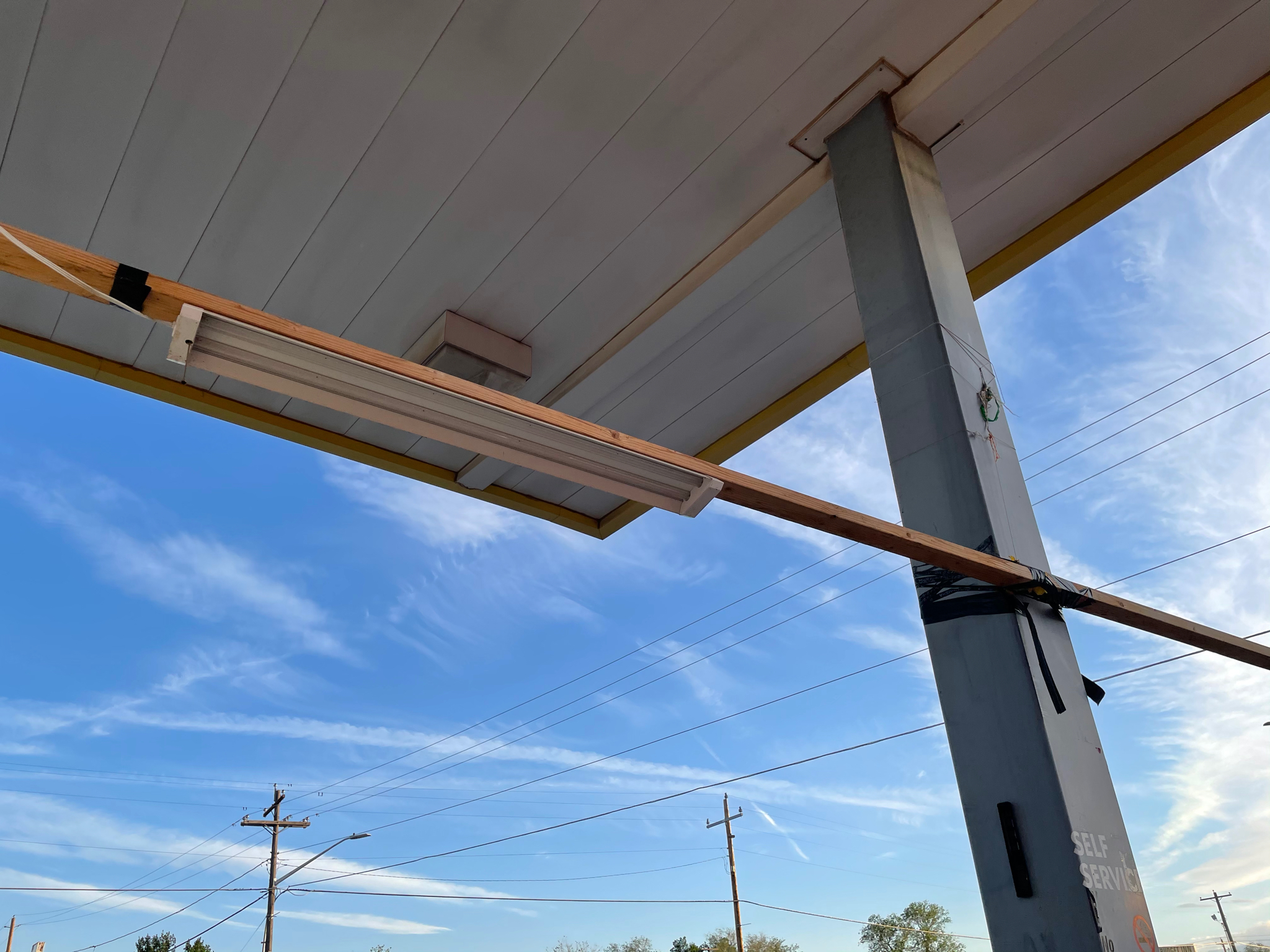 Fine, it’s the light being held up by the tape, not the roof.

Next day, we headed to Canyonlands, a park that I haven’t visited since the early oughts. There, we vultured our way into a parking space at the Elephant Rock trailhead and hiked on out to Druid Arch. It’s another hike with a lot of red rocks, not much water, and some fun slickrock obstacles of which I did not take photos for some reason. But here’s a panorama of the greater Druid Arch area, which would’ve been a decent panorama had I managed to not cut the top off of the arch.

And here’s somewhere else on that same hike, included for the sake of not implying that this is a short hike. Definitely a two-photo’er, at least. 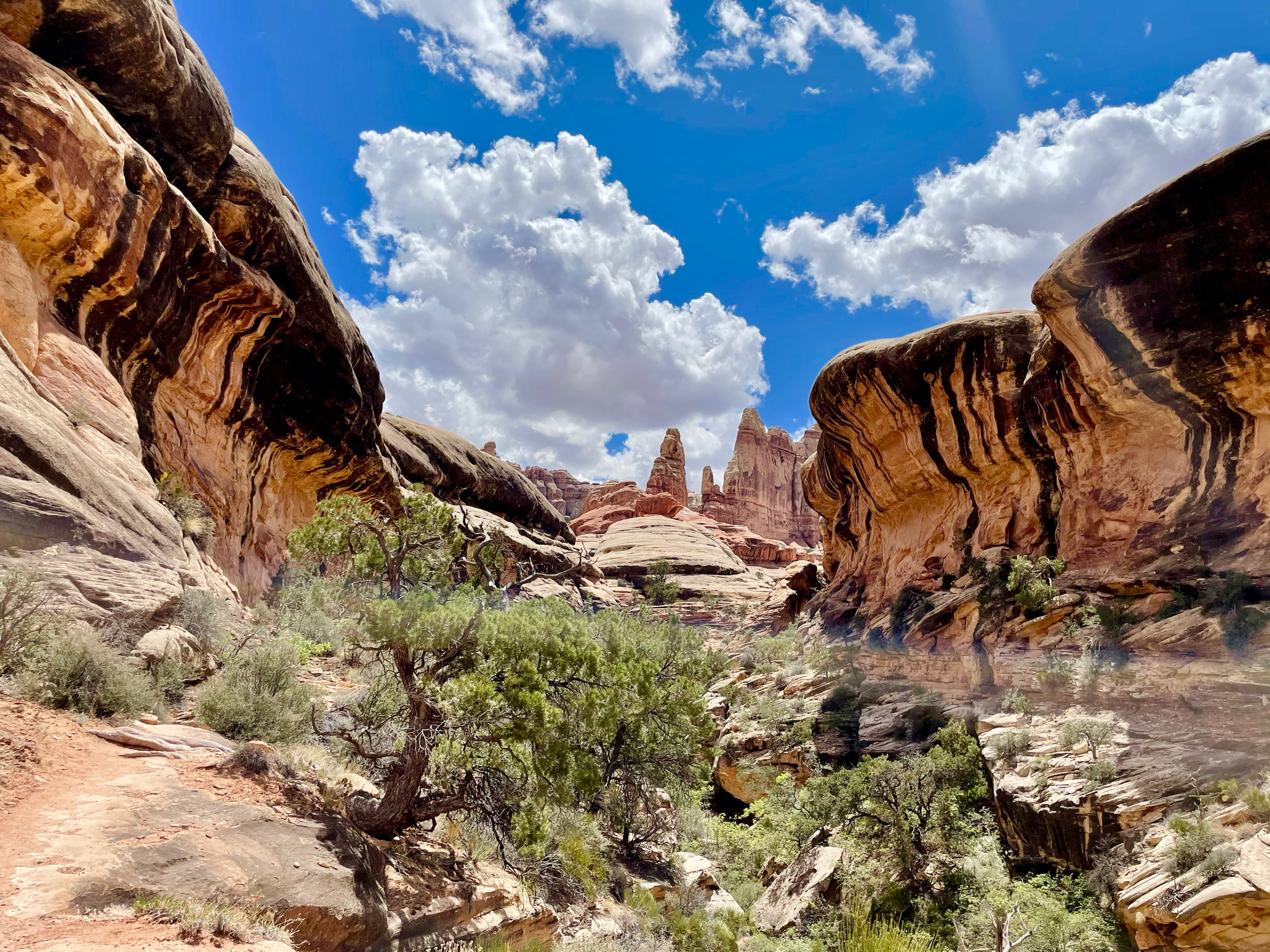 And, at this point, we’d been in southern Utah for about 24 hours and everything seemed pretty good. All ready to pack up and go home and… well, but that wasn’t the plan, since it was still only Saturday. Ben’s cousin-in-law and her friend didn’t get to Moab till that evening, and there was still weekend remaining.

Ergo, we went and rafted down the Colorado the next day. It was a pretty float, no real rapids, a lot of red rocks, and, confusingly, some water (!). Here’s the only photo that I appear to have taken of the event. Ben’s Pit Vipers were, as always, on point. 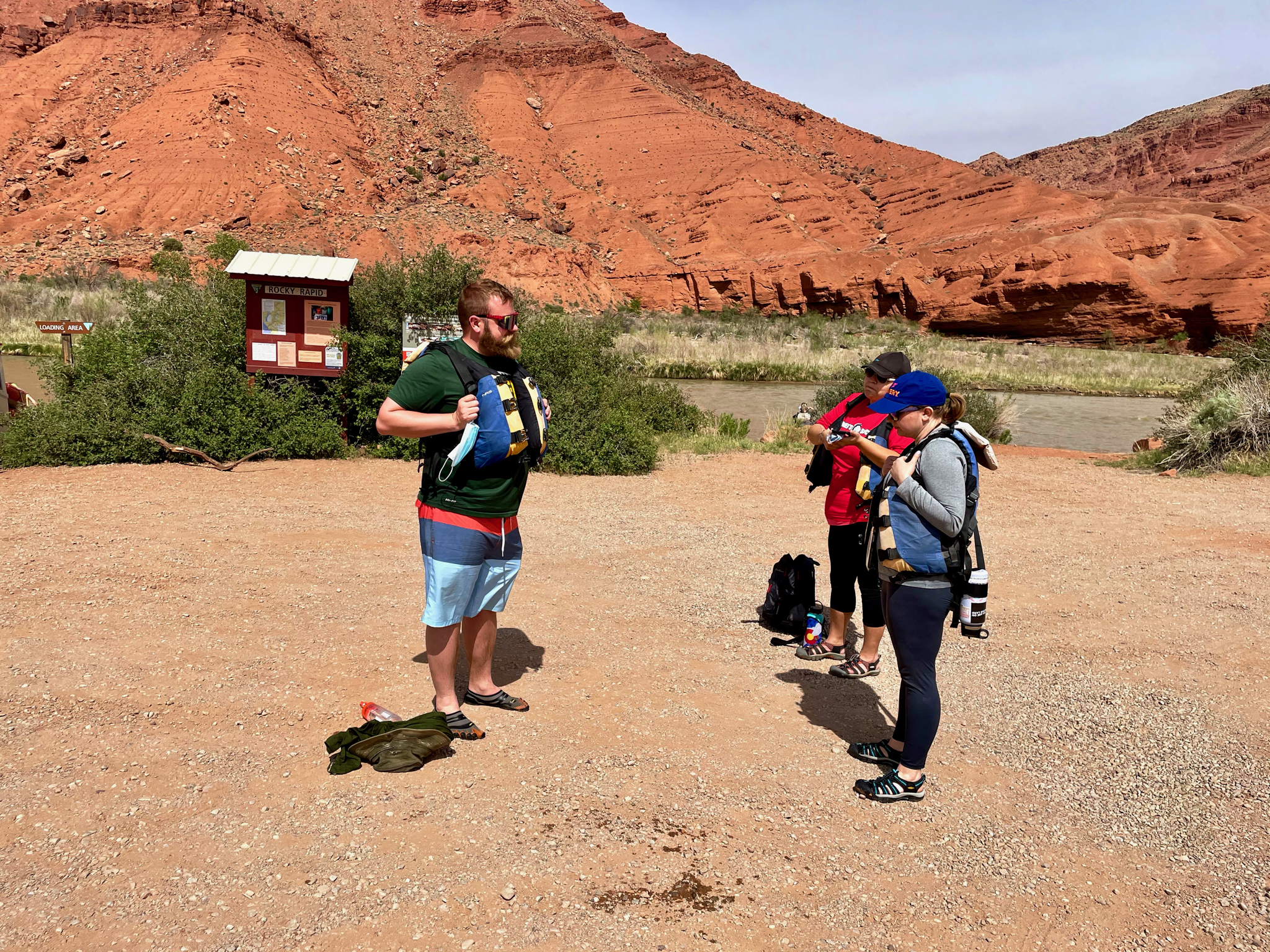 I don’t remember. I wrote most of this post in June 2021, and it’s right now more than a year later. We hiked most of the way to the arch. Marissa’s dog sure wasn’t getting up that ladder, though, and seemed to be having a hard time throughout. But, Ben, Stephanie, and I went up the ladder, took in the long view of the arch, then called it good.

And, again, it’s been a while, and my recollection is that I was pretty tired to still be hiking at this point, and then the end of the hike tripped my acrophobia a little. But, I’d never been to Delicate Arch before, and now I have. So — that was cool.

It’s all fine. Just: dry, and everything is some shade between orange and red. And I still don’t *love* love southern Utah. Maybe I can boost the expected pleasantness period up to 24 hours now though.

Also, for a few months of my time with Ben, I had a sign on my fridge that said, in part, “remember, southern Utah is *nice*”. I dunno. It’s nice. I should like it. It’s been a weird last few years. 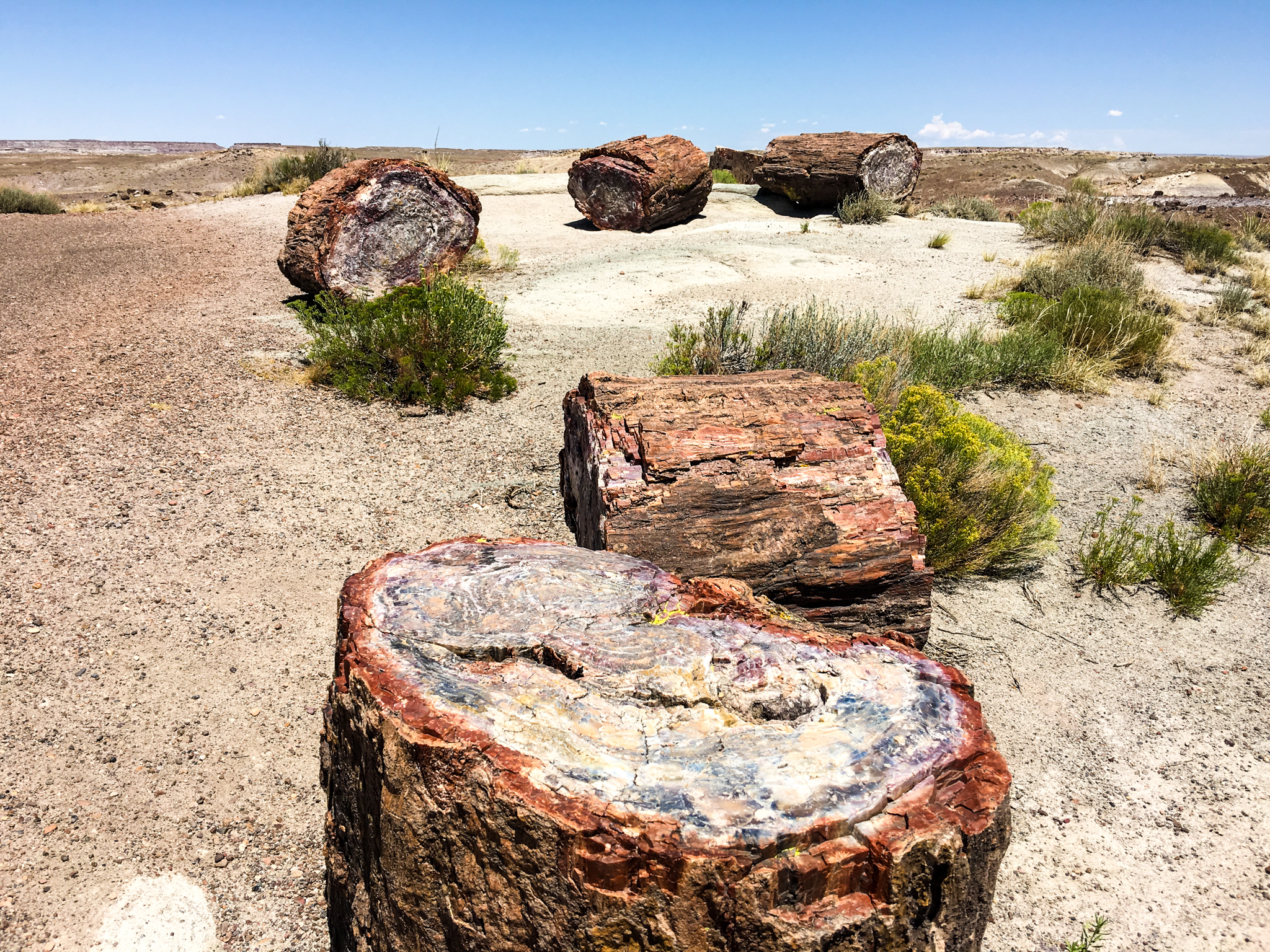 It’s worth half a day. Heading out to the UT, I figured I ought to get this park checked off my list. It’s sort of on the way if you want it to be (probably added a couple hours to my drive up to Zion NP). The park includes more than just a petrified forest (which, contrary to the image conjured by the name, isn’t filled with wall-to-wall upright trees that block out the sun), but also includes some petroglyphs (!) and some deserty area. 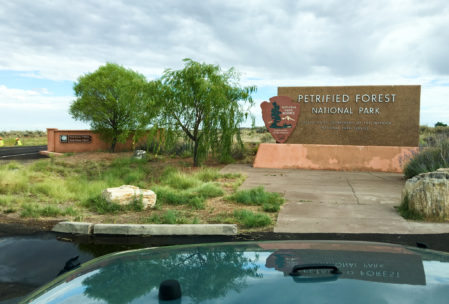 The sign reassures that you got off on the correct middle-of-nowhere exit.

Okay, then you technically get the visitors center and the main gate, then you get the desert. Which looks a lot like a desert, colorful version.

This is a panorama.

You can go hike around to your heart’s content starting at some lodge they got there. You hike down from the lodge and its hard to ever get it fully out of your vision, so getting lost is something you would kind of have to work toward. Also, the desert actually includes a lot of petrified wood fragments. Anyway, spent about 90 minutes hiking around, trying to find a destination that was suggested on a map at the lodge place. I doubt I found it.

Here are a couple of photos for my trouble. 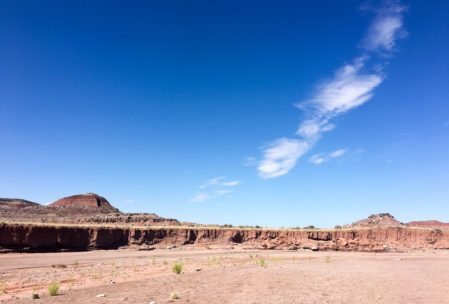 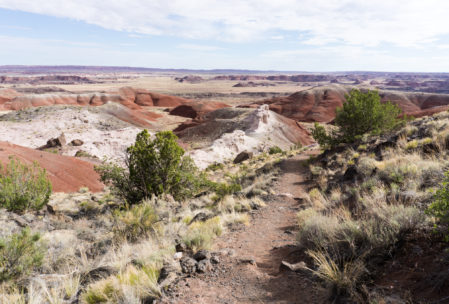 And yet more thereof.

Oh wait, here’s a third that seems to convey the feeling. 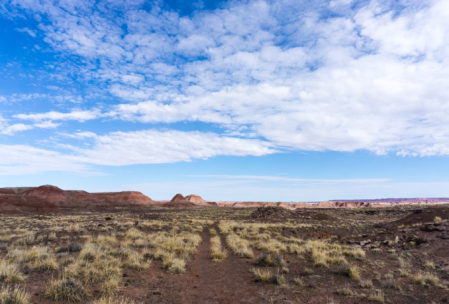 From the desert, The One Drive… Look, so the park is basically one road. It goes about 20 miles. There’s nothing really to do at the park but drive on this one road. Sure, you can park and walk and look at stuff, but, basically, you’re always pretty tied to the road. So, from the desert, The One Drive curls around and crosses the 40. Then you get into a couple of nice petroglyphy areas. Here’s evidence: 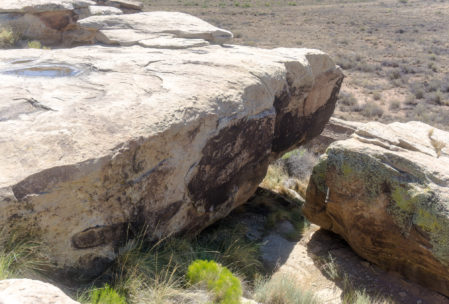 There’s also the foundations of a Puebloan village there, but it was kind of hot to be getting excited about ancient foundations.

Once you’ve done petroglyphs, you’ve earned your way to petrified wood. There’s a lot of it. Often times you’ll see an entire log on its side, strangely cut up into sections (supposedly due to the way silica naturally fractures). Some of it’s very pretty and it’s not hard to understand why/how people steal it out of the park. A lot of it really is pocket-sized and it just seems like there’s *so* *much* of it. Anyway, photos: 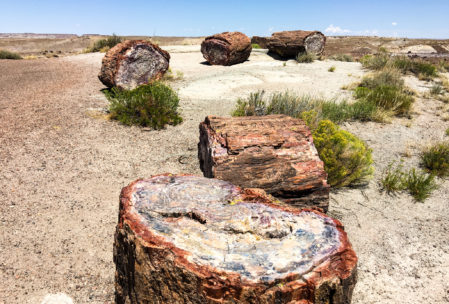 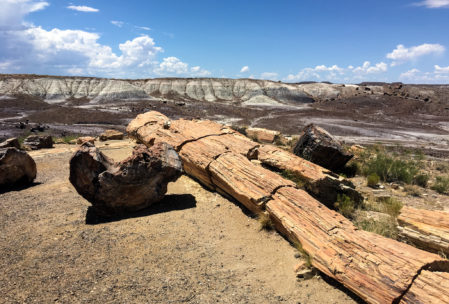 According to Wikipedia, not done with a chainsaw.

How do I rate the park? No one’s ever asked that. Whatever. It’s a nice way to spend half a day if you’re in the area. Probably not a location to try and base a multi-day vacation on. Or to, like, travel across the globe specifically to see.

Using my AIA™ National Park Rating Scale, Petrified Forest rates an 8 (out of 15).

Amazingness: 3/5. The petrified wood is pretty cool and uniquely pretty. The desert kind of pales to some of the redder, rockier variations (e.g., Bryce, Arches, Canyonlands).

Infiniteness: 3/5. There’s a lot of desert there if you’ve never poked your way around one before.

Adventure: 2/5. Not much reason to get more than a half mile away from the one road, although there’s enough desert there that, if you insist, the park can accommodate. 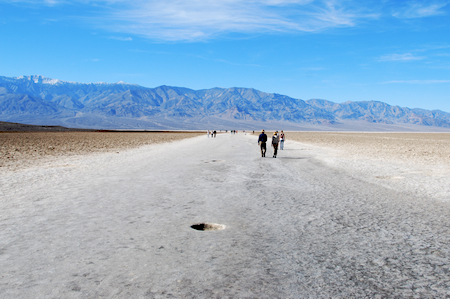 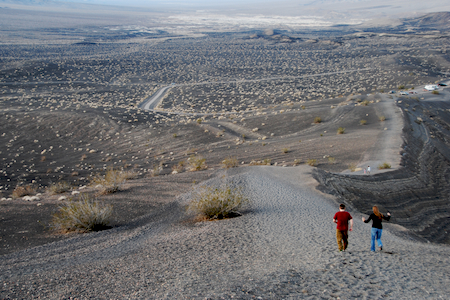 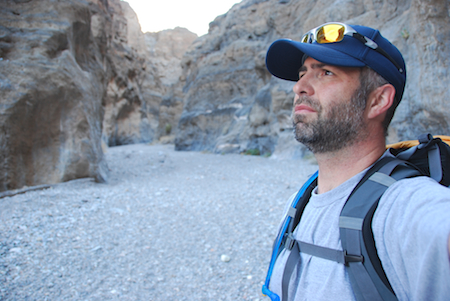 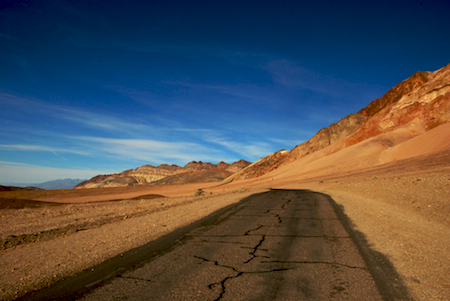 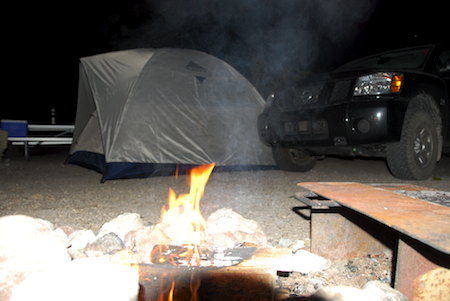