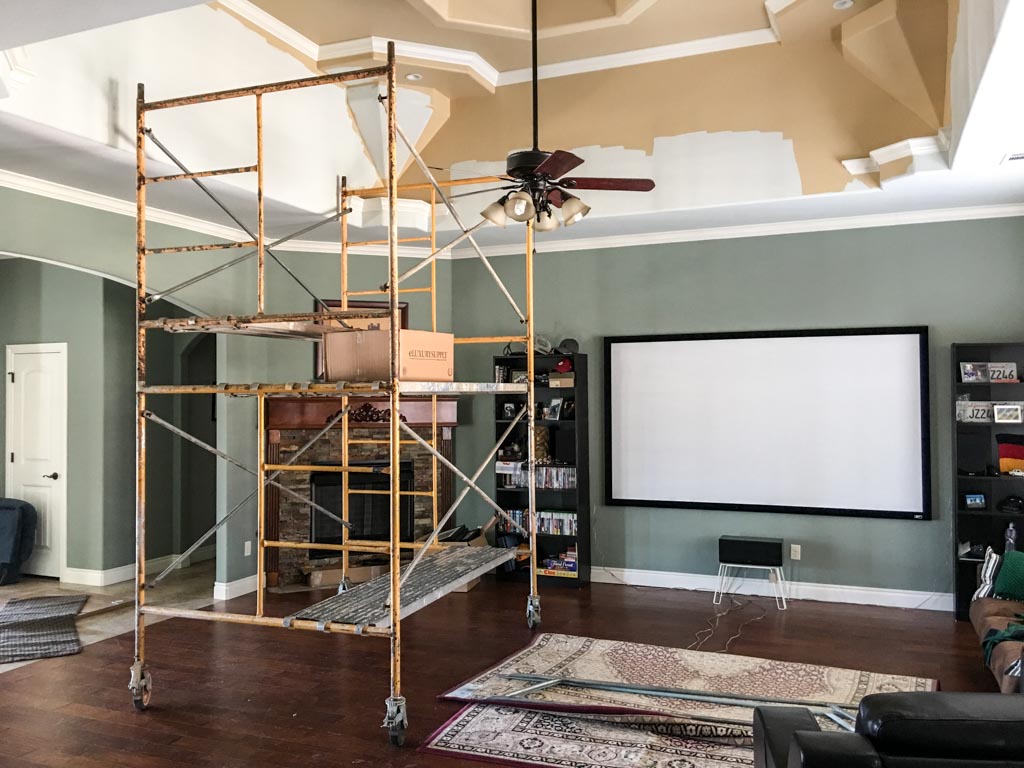 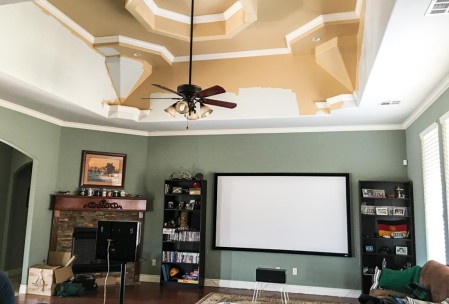 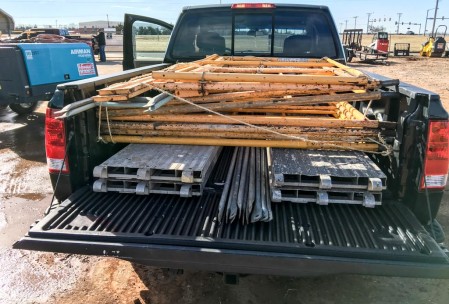 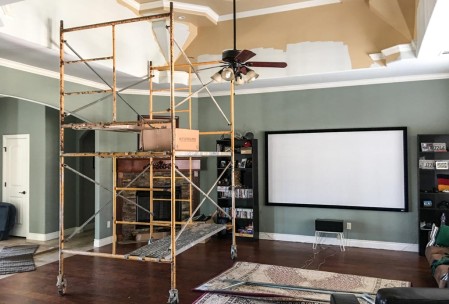 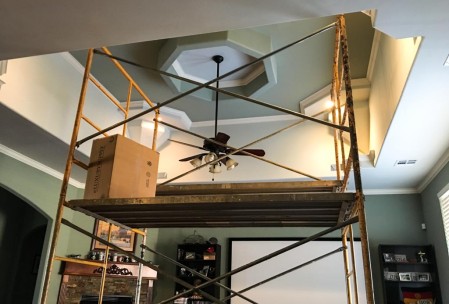 Some Painted Rooms, Whatever

Posting about Half Dome and Boundary Waters was a lot more engaging. Try it yourself, prove me wrong. (Or right.) Tape ball, before and after: 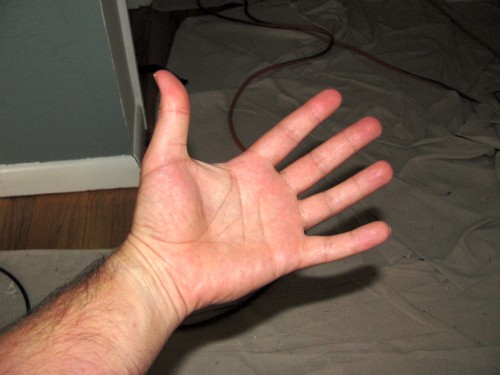 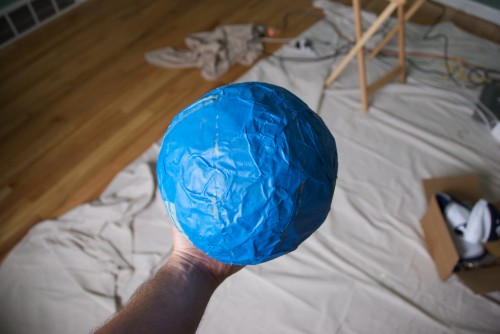 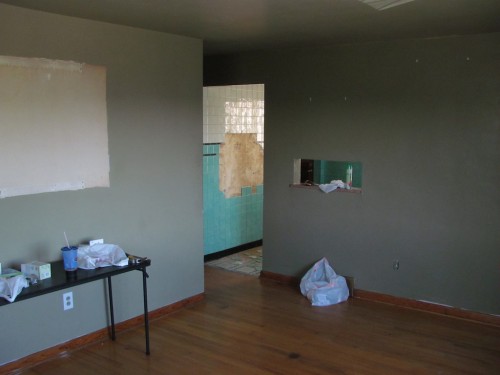 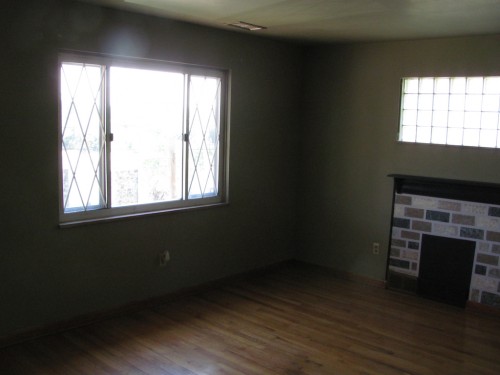 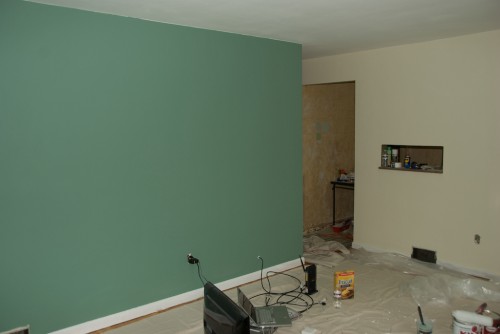 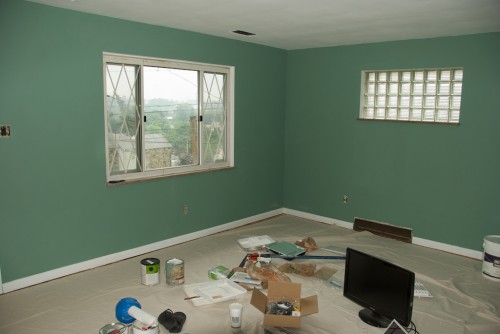 Fake fireplace is gone. The wall with the pass-through is going to be half-gone pretty soon. Box of Triscuits also gone. Also painted one of the bedrooms. Check this out! 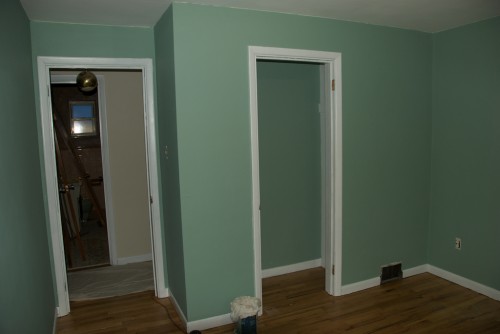 And now I only have, like, everything left to do. Maybe I’ll post the story about how I managed to get vents on the walls! They should make a video game out of this house renovation. There can be mini game after mini game, each more repetitive than the last. There could also be annoying NPCs. And when you accidentally kill your horse, you can just whistle and another horse will come for you. Just like real life.

It was the wackiest thing in the house, bar-none, and now it’s just a Kilz-swipe away from complete extinction. In a sense, I feel bad about destroying such a one-of-a-kind design element. In another sense, not so much. Before vs. after: 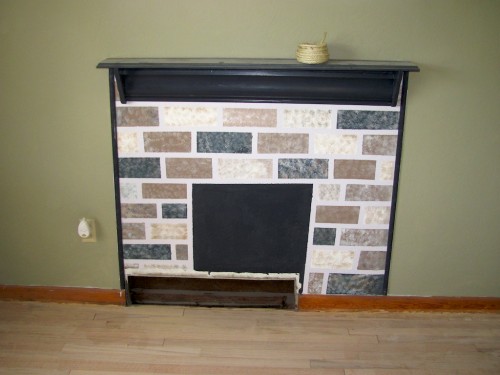 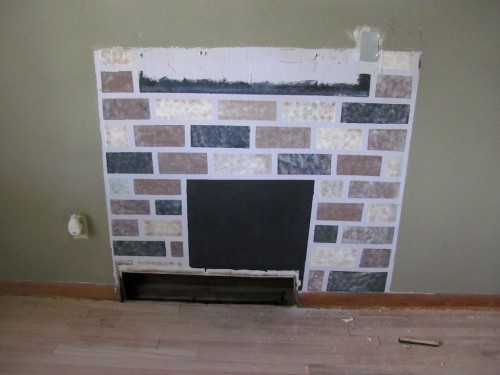 The cool thing is that if I reversed the order of the photos, it’d still look like I’d done something.

Yeah, all I did was knock the “mantle” part off of it. But still. Took at *least* 20 minutes. Prior to destruction, I showed this feature to a guest.

Her: They just painted the wall like a fireplace.

Her: But it’s just a cold air return.

Her: So what were they…?

In a few days, Kilz ftw.

Other than that, yesterday was another day of sanding and shop-vac’ing. You can’t tell me this doesn’t look like fun: 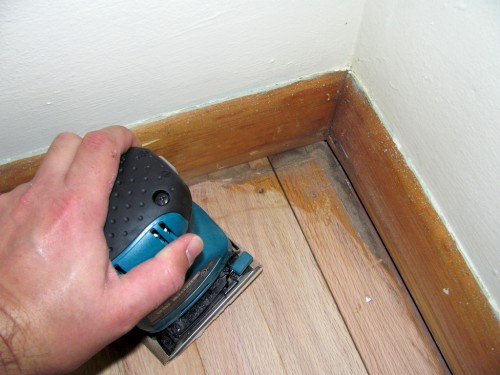 Unless you want to, then you can.

Here’s a run-down of sanding:

Doesn’t actually look that arduous when it’s typed out like that. OTOH, I blew my nose yesterday afternoon and whatever it was that came out was medium-brown.

800 Square Feet and a Cloud of Dust

I think it’s more sore from manhandling the washing machine by myself than from the sanding. I’ll do an A/B test next chance I get. 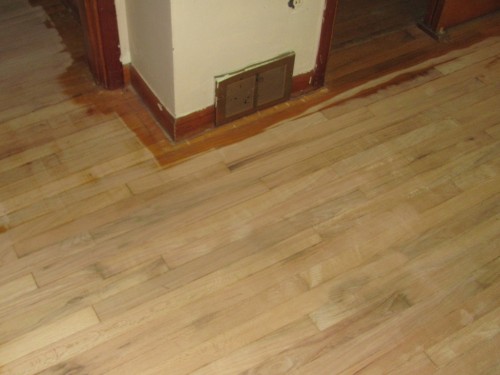 You can still see some darker areas if you know to look there, but I think if you don’t know, you won’t notice. You’ll just think the wood has character. And imho, now that the crappy hunny-colored stain is gone, the wood is kind of pretty. It has some actual character (not just “character”) and some cool reddish color to it in places. I mean, yeah, I’m just going to cover it back up with a different shade of stain than before, but it’s sort of nice to know that the wood was decent-looking to start with. 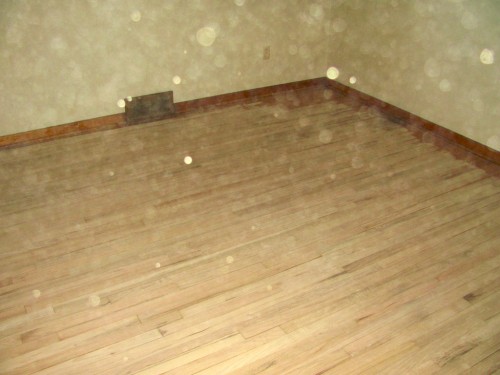 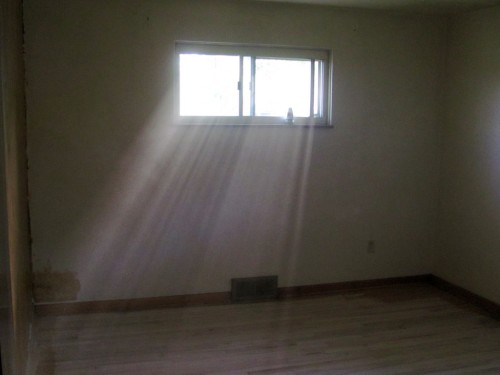 If it weren’t for the dust, you might not even know an angel was hovering outside. 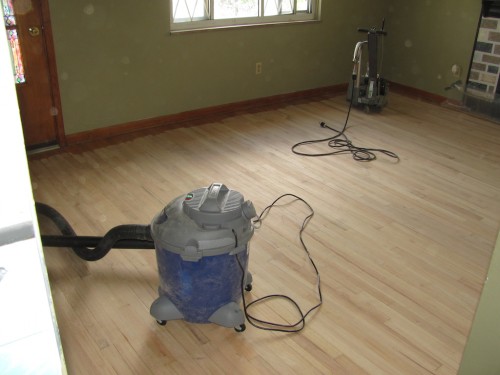 It looks like they’re having a lovers’ quarrel. The shop vac is the guy and he’s rolling his eyes, trying to think of somewhere he can go so he doesn’t have to deal with this crap. (OTOH, for a short fat guy, he did pretty well for himself.) 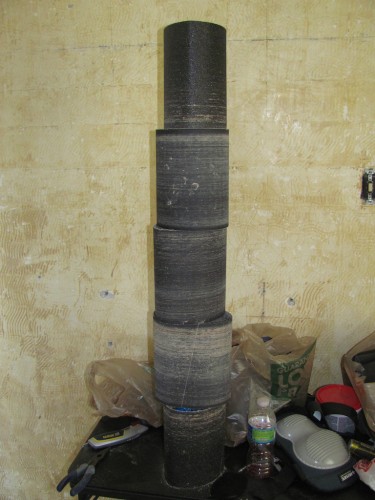 It looks like I’ve wallpapered my kitchen walls with ancient papyri.

Gonna hold off till Monday before getting the edger to finish the job. I’m also gonna try to fade out those stains a little more by bathing them in peroxide until I’m ready to start staining. I hear it might work. Tomorrow? Maybe I’ll find me a clothes dryer or something. Could probably stand to take all my doors down and vents off. Should also finally get rid of the sink cabinet in the kitchen. Plus there’s glue left to chisel and tiles left to scrape. And there are some gaps in the floor that need filling. Haven’t started the bathroom yet at all. Just got a new universal transponder I should install on the garage door opener. Need two new external doors and a new storm door, that could keep me busy. Have to replace all the light switches, not to mention map the circuits on the electrical panel. Gutters ought to be cleaned out. Kitchen floor needs to be pulled up. Still have to mud/spackle in the kitchen wall gouges.

I was thinking that somehow I could do this home renovation thing the same way that I did the road trip last year vis a vis blog coverage. Probably not realistic. For one thing, it’s way, way too easy to jump around to different projects. For another thing: meh. But I’ll forge on. Try and get something up every day so that you, the reader, can have the vicarious experience of getting down on your hands and knees and examining 50-year-old cat urine stains scattered across 700 s.f. of otherwise in-decent-shape hardwood flooring. Woot! for us all.

Right, so the main problem with the house right now is that it smells like 50-year-old cat urine. It’s probably not 50 years old. It’s probably all within the last six or so. But still: six. As such, getting the floors sanded, urine-neutralized, and re-finished is a very high priority. At some point — probably the 60’s or 70’s, someone decided to cover up the house’s hardwood floors with carpeting. I’m guessing shag and forest green — although this *is* Pittsburgh, so maybe black-and-yellow. At some point after the 60’s or 70’s, the carpet got ripped up and, when it did, it left behind hundreds of small staples, which would tear up the sand paper on a floor sander if left alone. 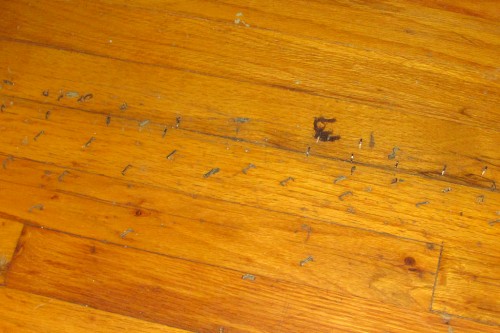 Degree of difficulty on pulling them up ranged from “hard” to “easy”. The hard ones generally broke off, leaving two small staple nubs. It was like pulling slivers out of wood. How ironic. Some of the staples had padding and/or carpet stuck to them, but they came out of the floor, just like the rest.

I saw some DIYer comments saying that the best way to pull these up is with a “wonder bar”, but those people were high. Needle-nose pliers are the way to go. 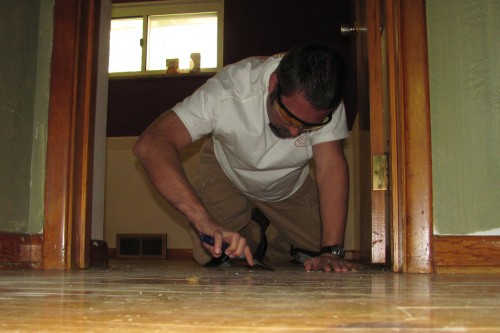 The hardwoods are in the living room, the hallway, and in all three bedrooms. I was kind of contemplating last night whether I should get a pro to come do the sanding and re-finishing, but the quote I got was $2,000+ and I was assuming there’d be a lot of plus for the stain removal.

OTOH, one of my urine stains looks like the Virgin Mary in repose:

I should probably just pull the boards and sell them on eBay.

I’m not sure why the Virgin Mary is holding her nose, but otoh I’m also not sure why some dude’s cats decided to pee in her shape. It is surely a sign and perhaps it has healing powers. I’ll let you know on that one. ‘Course I’ll have to get sick first.

So the floors are ready for sanding now. I’ll probably put some plastic sheeting up to cover the kitchen entry way and should probably do the same with the air intakes and heating vents. “Should”. Meanwhile, today I bought some of that pet stain remover spray from the Home Despot. It has enzymes in it. I like to think that it’s helping, but it’s probably just psychological. They won’t be gone till after the sanding’s done and the bleach is applied and the industrial-strength pet stain remover is applied and the hydrogen peroxide is applied.

A lot to look forward to!