Moving on from the massive success of my, er, *writing table* (which now is mostly used to rest my cell phone on while charging and sometimes hosts piles of junk mail on the way to the recycle bin), I’m building a TV stand. I have looked around and so many corner TV stands, but after much thought, I have made the crazy idea to make my own!! My TV is currently on top of a $20 IKEA end table with all my important Components soaking up dust from the floor. Plus there’s no room for my center channel, so I’m forced to listen to dialog through the front speakers. Very sub-optimal. 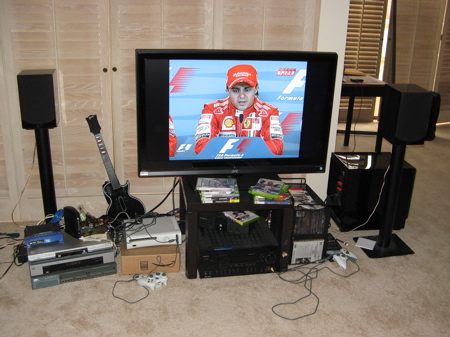 These are trying times.

My plans are kind of a work in progress: 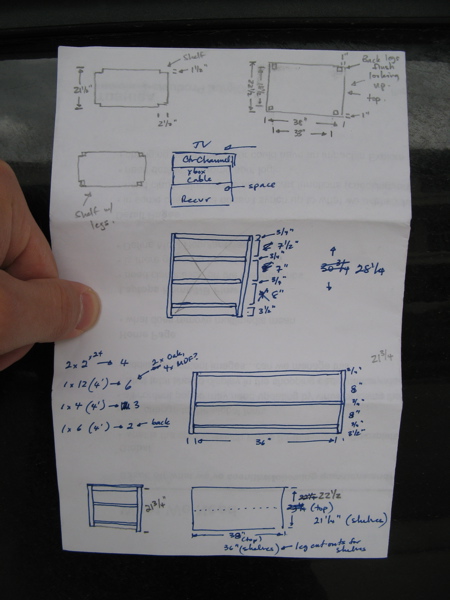 The blue pen drawings were the extent of the original plans. That’s what I used for my first trip to Lowe’s on Wednesday. They were good enough to know what basic first-stop materials I was going to need. They were based primarily on the size of the components (height, width, depth). I’d originally thought of building a tower with one component on each shelf of the tower (check out the middle sketch with the penciled “x” drawn through it). That was going to make it so I’d have to be standing up to watch TV straight-on (i.e., without looking up), so I scrapped that for a version that calls for components to fit side-by-side on a wider stand that’s a more conventional height (most stands in stores are 18 to 24 inches tall).

While it probably seems foolhardy, I kind of don’t want to over-plan this. I’m a rank beginner, sure, but I’m also an ardent believer in pursuing emergent strategies. The pencil markings above are additions made today while carrying out Phase I of the project. Heck, for that matter, I was also making design decisions while I was at the hardware store. Despite what that short list on the left says, here’s what I bought:

I ended up not buying any wood for the two shelves called for in the plans. The original short list implies MDF (albeit with a question mark), but upon further review that seemed too chintzy. Unfortunately, Lowe’s only had six 4′ 1×12 boards there and didn’t like the looks of half of them — so I gotta go back for more (which is okay, because I don’t have enough equipment to glue more than two boards at a time anyway).

(In case you’re an even more rank beginner than I am, it turns out that wood selection is pretty important. Even though everything sort of looks the same in those stacks at the lumber department, they’re not. Some pieces are bowed, others have obnoxious knots in them, others are fraying or have other signs of wear and tear. Bad wood — even if it’s not part of a visible surface — can make a project look like crap in the end. Look for wood that’s straight and that’s pretty to look at even unfinished.)

Just by the way, the cost for this trip to the store was around $100 — and I still have four more 1x12s to buy at $25 a pop and will probably want to buy some more 1x3s (or 1x2s) to help support the top of the stand. Red oak is kind of expensive and a little hard to work with (in that it’s a pretty hard wood), but I like the way that it looks. The ash (poplar? whatever it is) that Lowe’s always has would probably look nice as well. It’s only a little cheaper and is about as hard (or harder?). It doesn’t have as much “character” as the oak (IMHO), but that can be a good thing.

Also: I still need to buy some hardware (2 1/2″ brass screws, corner brackets) and some of the materials (stain, paint, other screws) I just happen to have left over from the writing table. Counting the cost of the hardware, stain, paint, and wood, I’m expecting this table to cost somewhere in the vicinity of $250. I can’t actually guarantee it’ll look any better than something from IKEA, but I’m mostly doing this for fun, so — screw IKEA and damn the cost.

Today was Day 1 of the actual building process, but I’ll make that a separate post — eventually.