Hiking in the Rainforest While Complaining About the Weather

I feel like I nailed the headline*, but this first sentence? Hard pass.

Was trying to figure out where in the world it made sense to go backpacking in May, and came across reports of an enchanted valley in Olympic National Park called Enchanted Valley. Pitched it to Ben, was in agreement, and eventually it became May and we went.

There was a road-trip in here also, but we’ll pretend for now that that wasn’t the case.

Parks service originally told me I had to pick up the permit from the Port Angeles ranger station, but then, two days before leaving Utah, I got an email saying I had to print out the permit at home. I mean, it worked out, but in the meantime I’d booked a hotel in Port Angeles, and… something.

Below is the Graves Creek trailhead where we started. It’s not very close to Port Angeles, even though we started the day in Port Angeles. 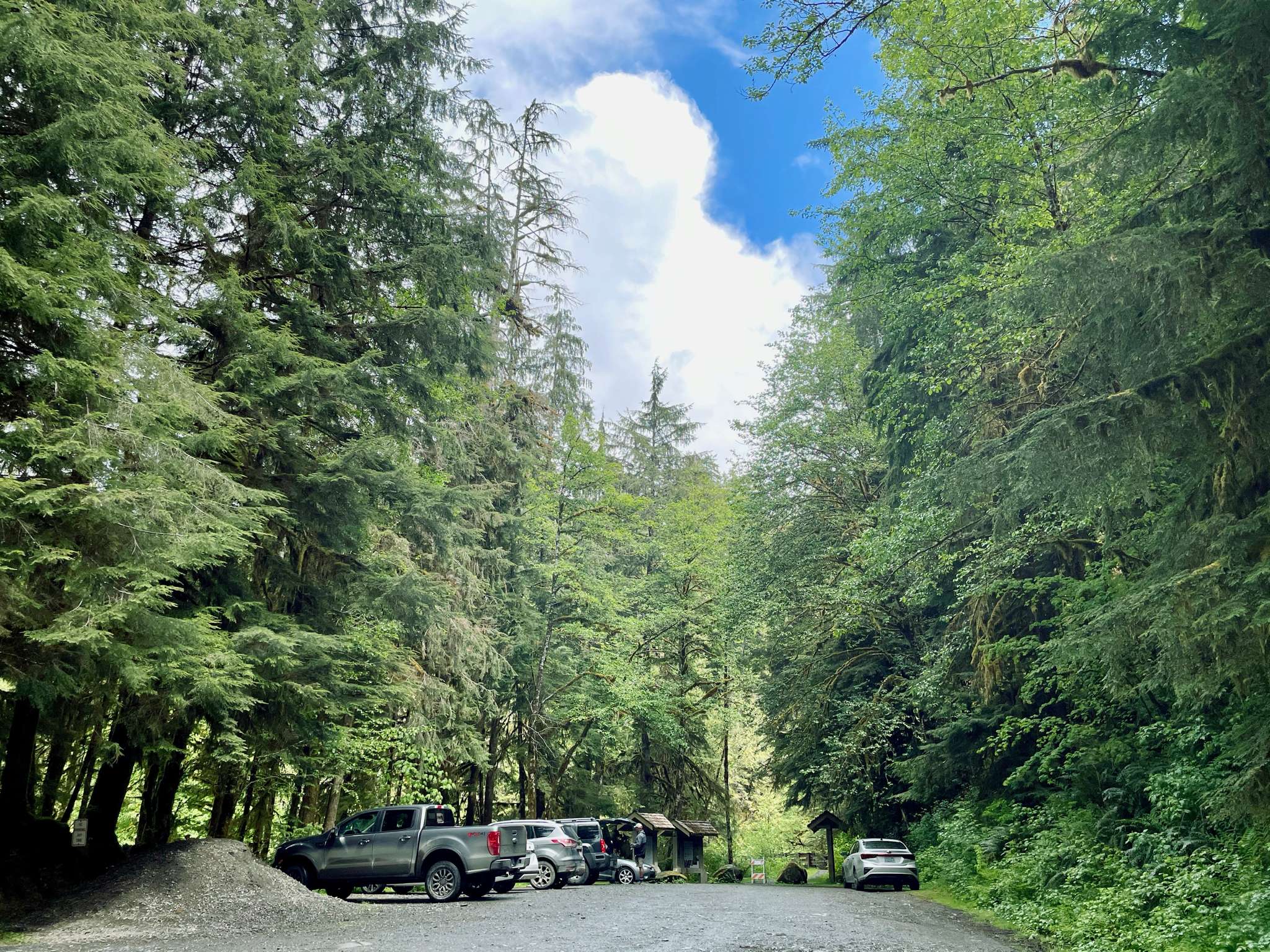 Not so much pictured: the drizzle. There were a few people in the parking lot just finishing their hikes. They had the sorts of thousand-yard stares one rarely sees outside of wartime. I mean, the whole hike is in a rain forest, etc. 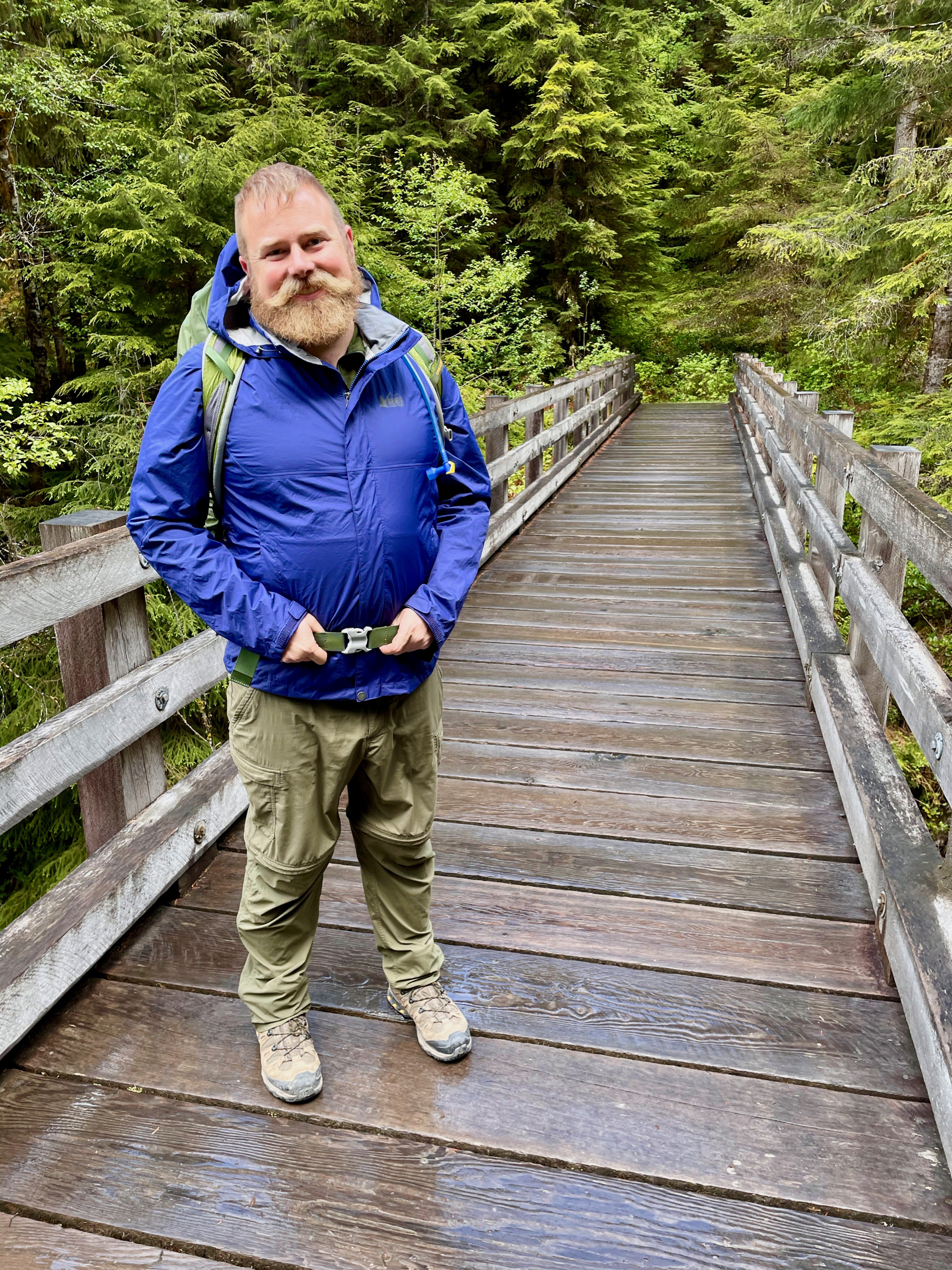 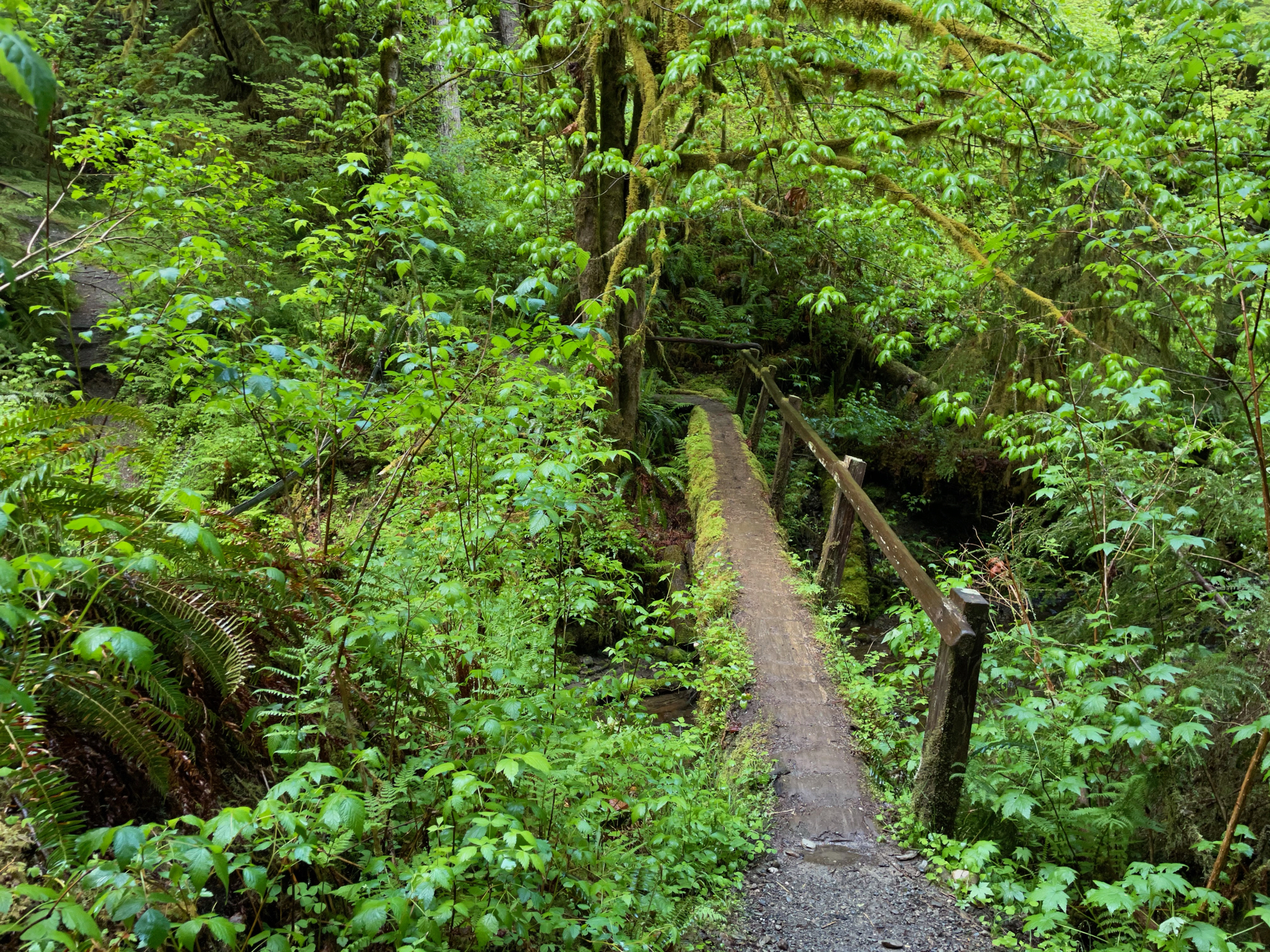 That last photo is this hike in a nutshell: a lot of green, overgrown log bridges with railing on only one side, drizzle that occasionally morphs into real rain. Not east-coast real rain, just the west coast kind. We did this hike over three calendar days and two calendar nights. About 48 hours from put-in to take-out. The first major check-point on this hike (which doesn’t involve a lot of check points) is the Pony Bridge. It’s a pretty good descent to get there (which, on day three, becomes the most irritating of ascents). But, here’s Ben enjoying wetness from the Pony Bridge: 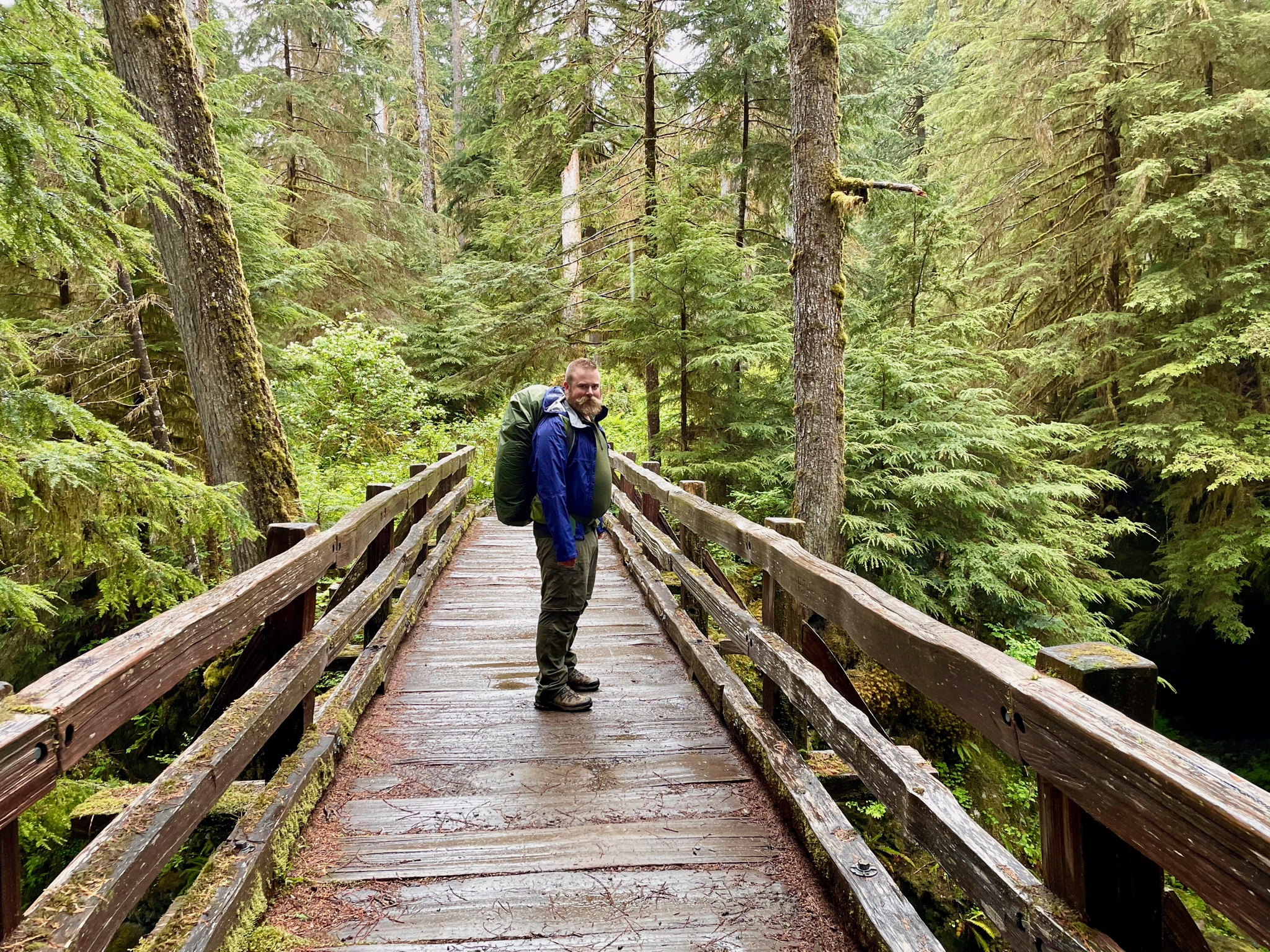 Pretty good gorge going through there that I didn’t take photos of for some reason on the way out. On the way in, though — very gorge, such photos, etc.

And then, there are just a lot of trees with moss growing on them. And occasional cascading creeks. That kind of thing. 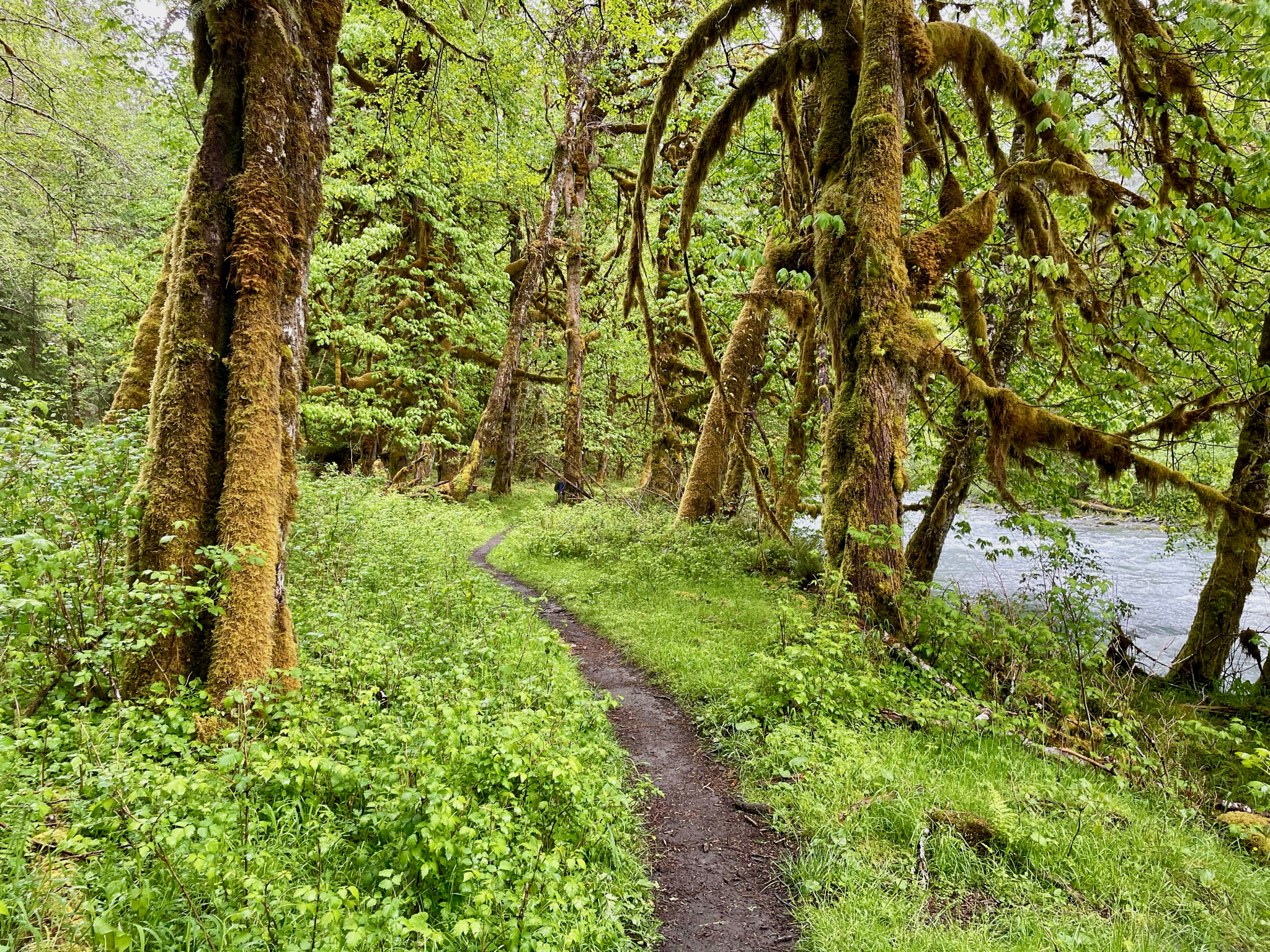 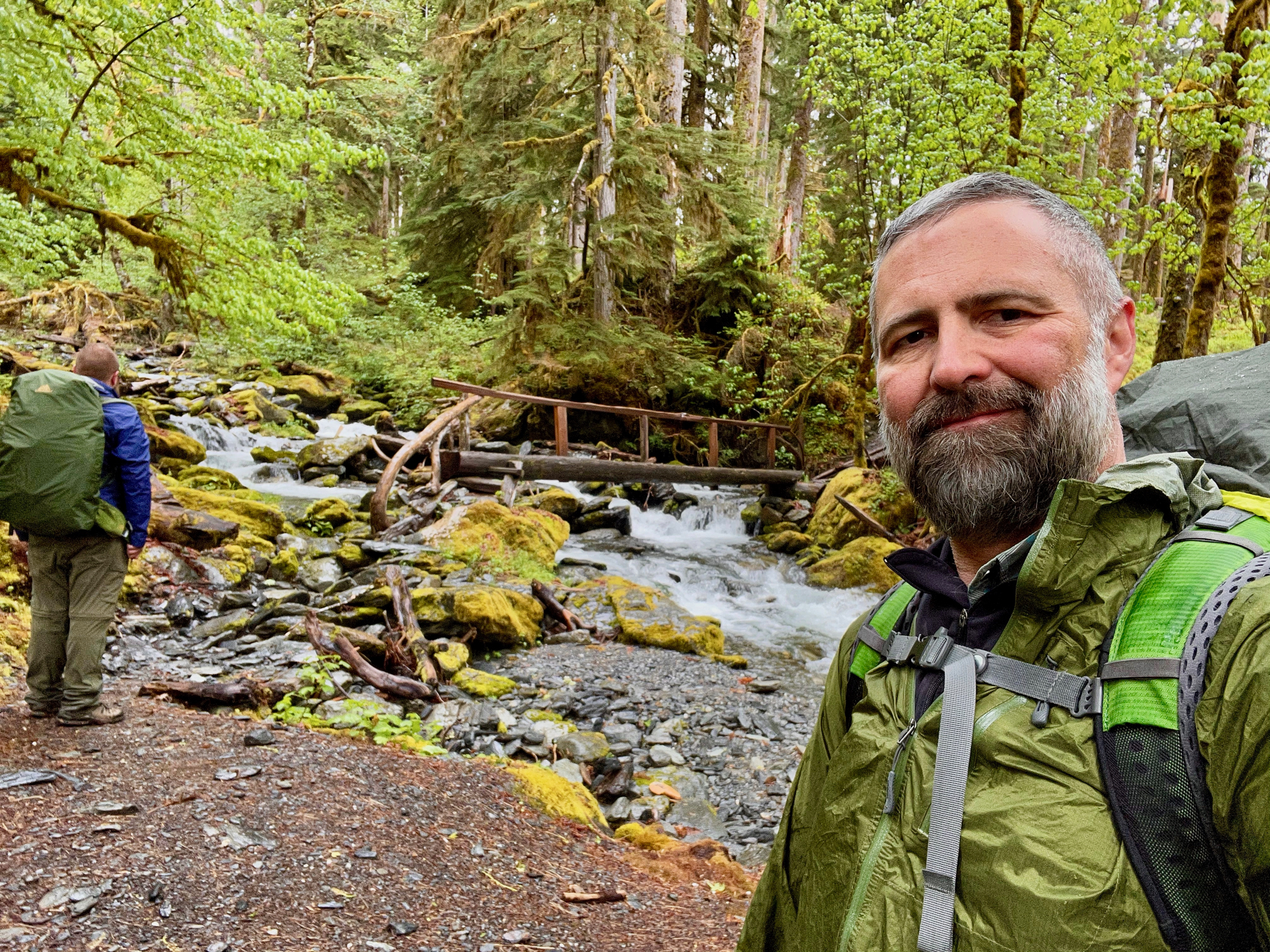 That second photo pretty well describes our relationship. I kid (probably?). What does that photo actually convey? The relationship is great. Ben and I are low-key fantastic.

We ended the day at O’Neill Creek Campground, about seven-ish (6.7?) miles from the trailhead. O’Neill provides a couple big advantages: (1) it’s not far enough in that you need to lug around bear canisters to camp there and (2) it’s close enough to Enchanted Valley that you can make it from O’Neill as a day-hike. So, that was cool.

OTOH, the wood there was way too wet: 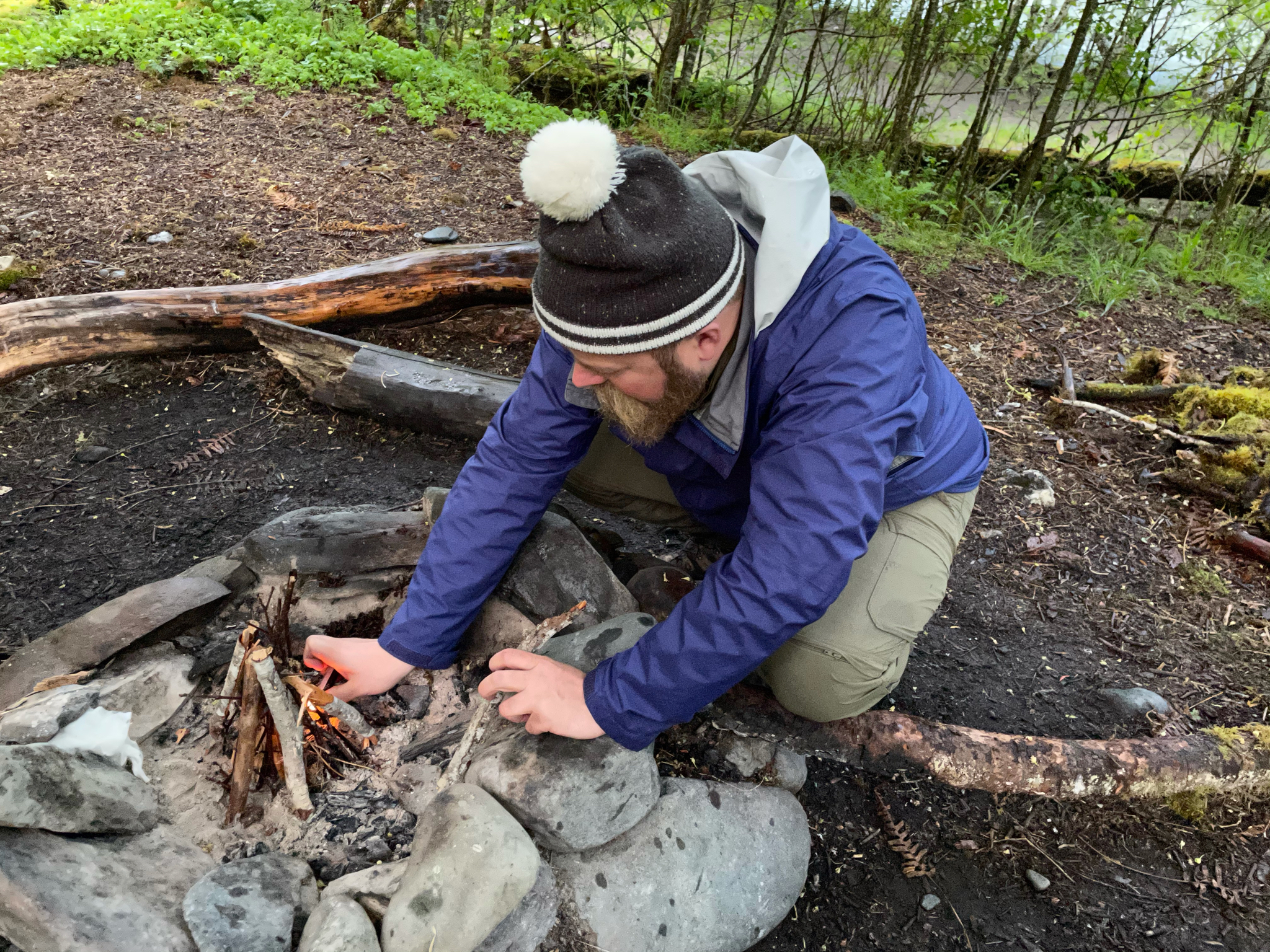 One forgets that being damp and not moving around can be kind of miserable. The air temperature was technically in the 50s most of the day, but it was cold at camp. Due to the damp. Both nights. I dunno. Backpacking in the rainforest while complaining about the weather, etc., but it was pretty easy to talk ourselves into going to bed before sun-down just to get out of the damp air and stay warm. While hiking, though, those mid-50s temps were swell.

The next day, we took off for Enchanted Valley on a day-hike (we stayed at O’Neill both nights). The hike consisted primarily of rain forest. 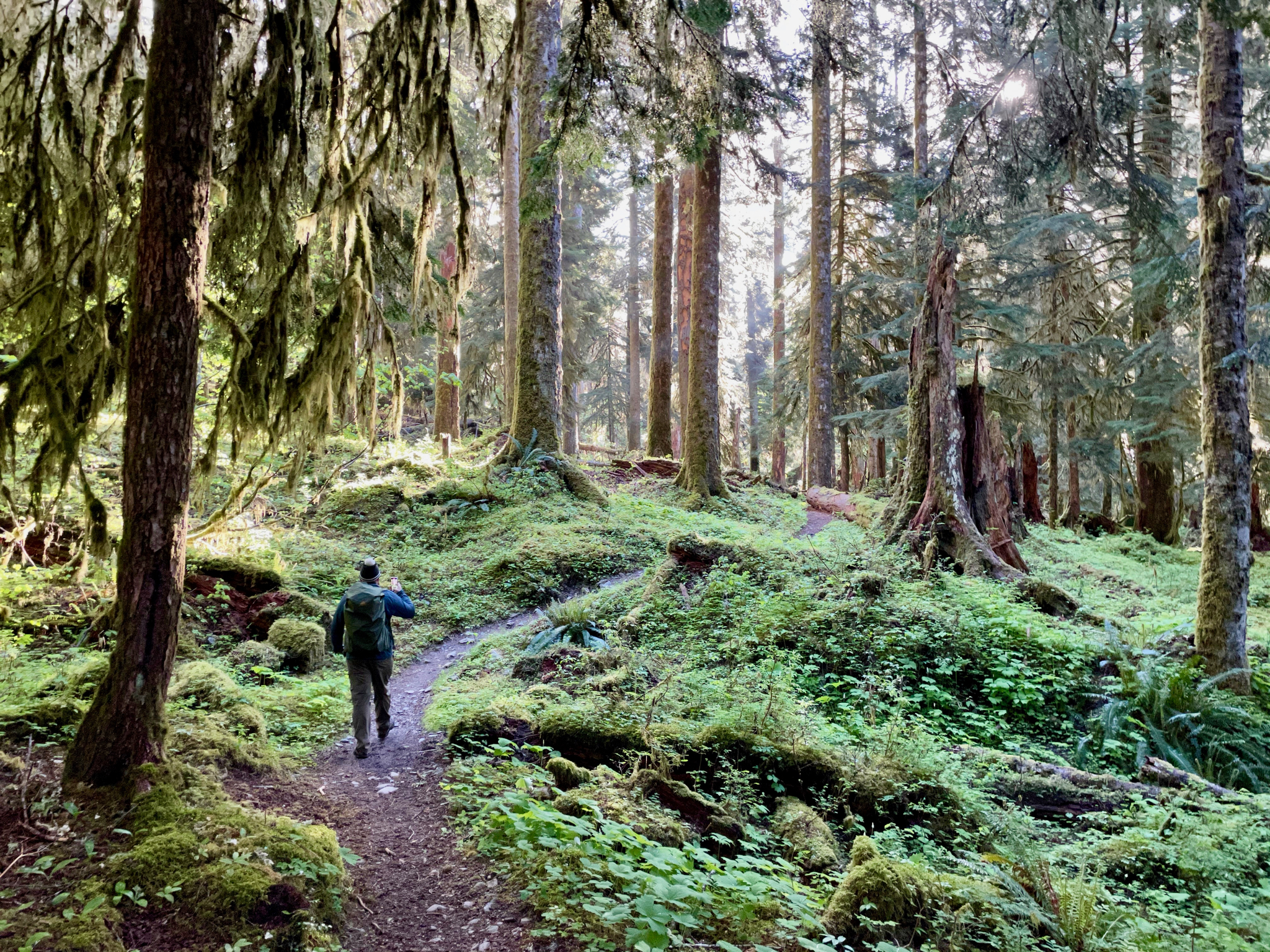 I’m writing this like I’m somehow jaded with and unimpressed by rain forests. The amount of green, though — it’s pretty awesome. I swear the air there is better than any other I’ve ever breathed. And so many shades of green. Photos don’t do the green effect justice — you need a couple days or so of relentless immersion.

During the hike, we heard a lot of grunting elk, but never actually saw them. We did manage to see this guy (gal?): 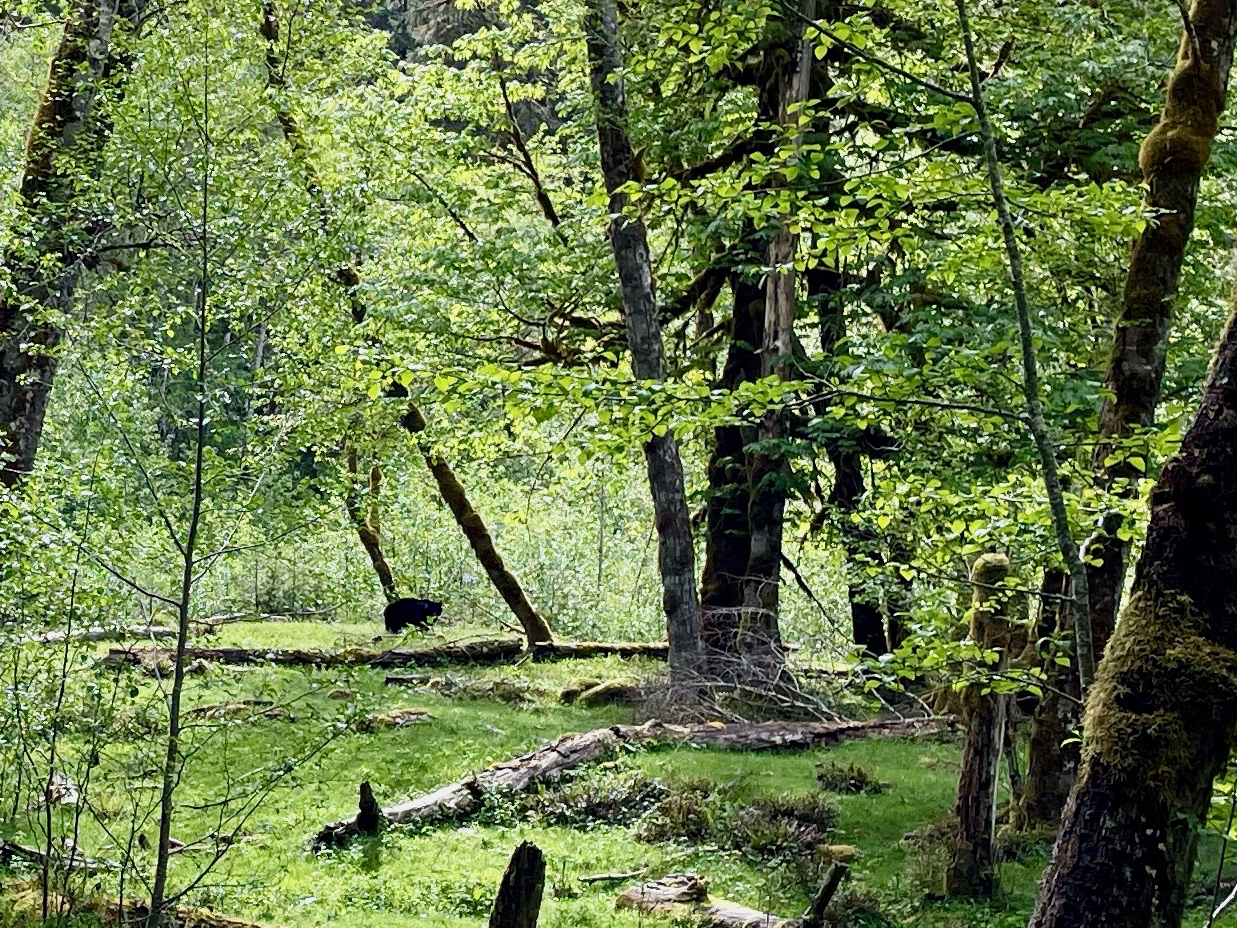 Weirdly, the bear seemed a lot closer in real life than in the photos. Probably 200 yards away? I dunno. Maybe 300. We also tried a photo version that also included Ben and me as sort of a bear, bear, demi-bear situation, but it didn’t work out. The one bear just turns into a black speck. 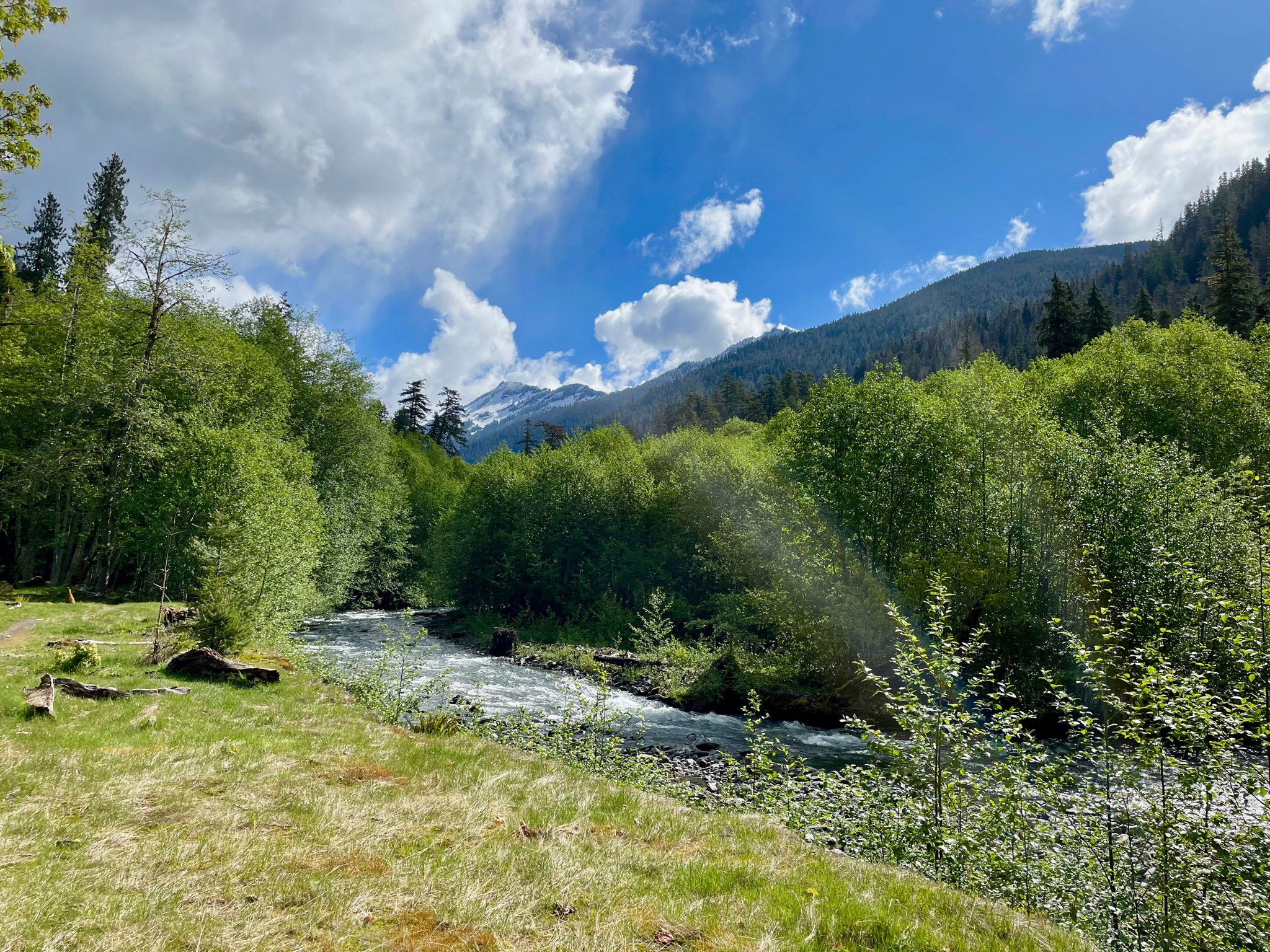 The last thing you do before entering the enchanted part of the Enchanted Valley, just after answering the troll’s questions, is cross this bridge. Which is way too high, way too narrow, way too wet, and doesn’t have nearly enough railings. 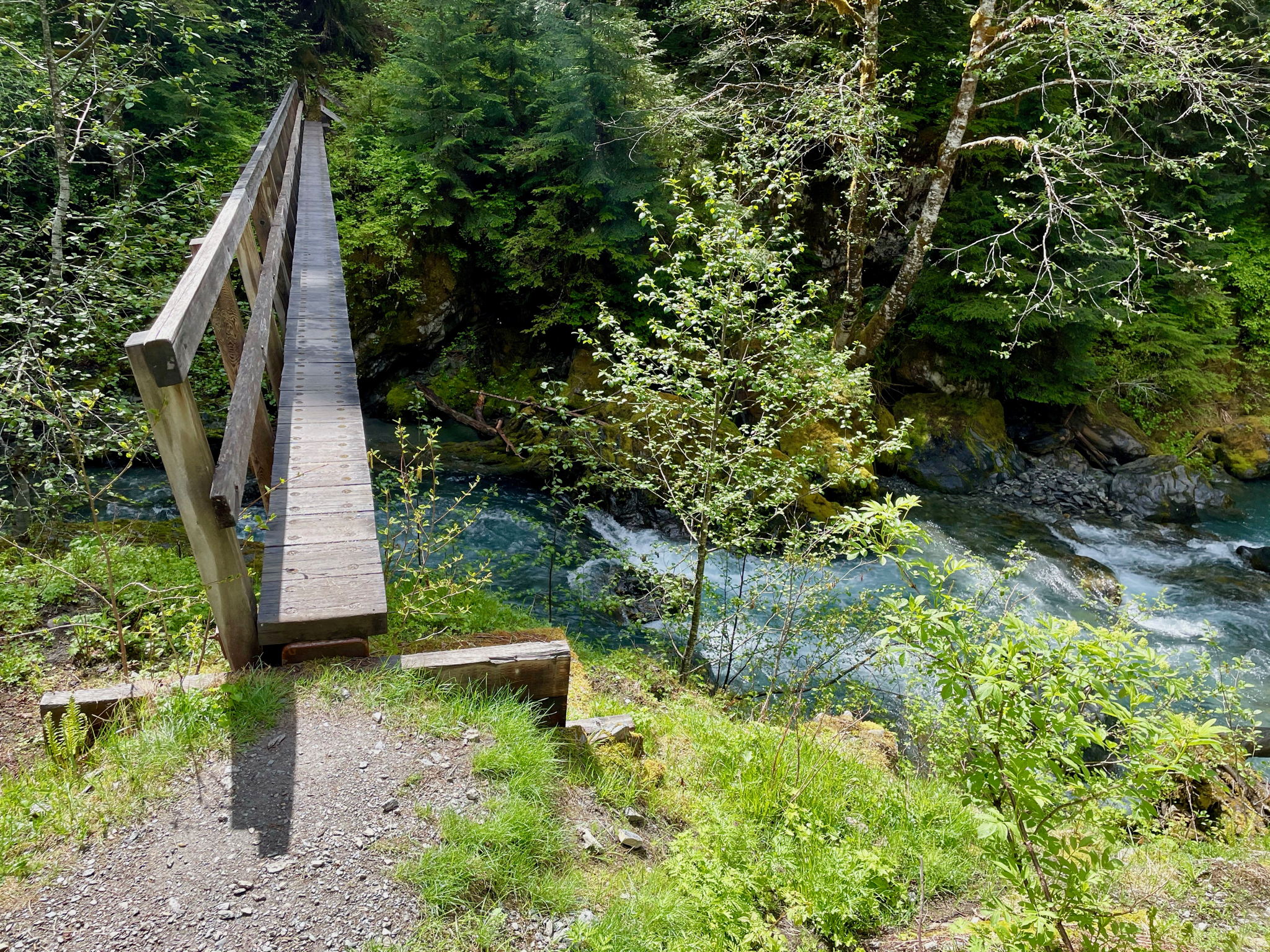 The actual Enchanted Valley involves much sorcery and photographs can’t convey how awesome it is. There were waterfalls everywhere we looked, plus the sheer rock walls of the mountain, the river, the closed-down back-country ranger station, and, and, and everything. I dunno. Here were some attempts. 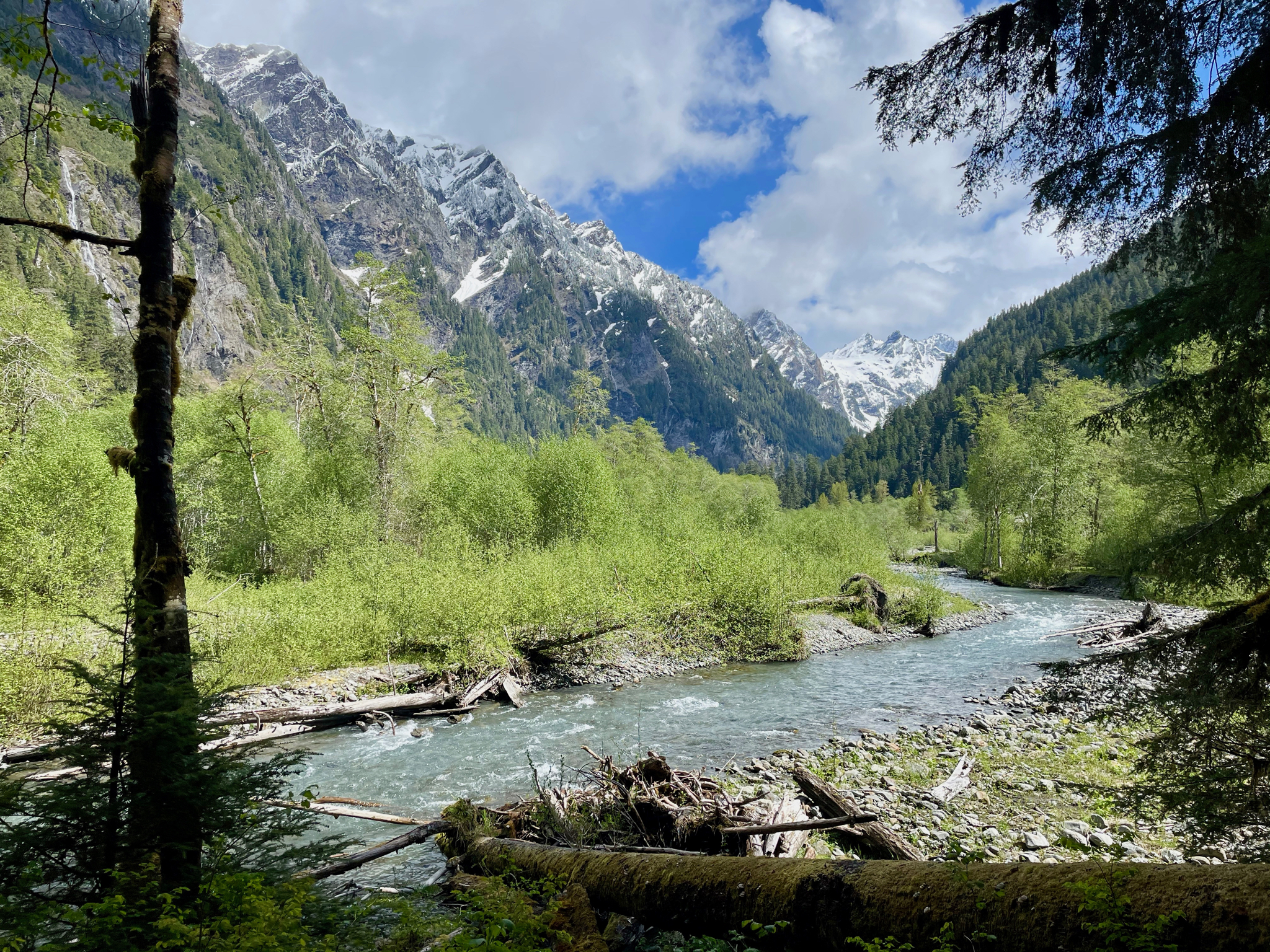 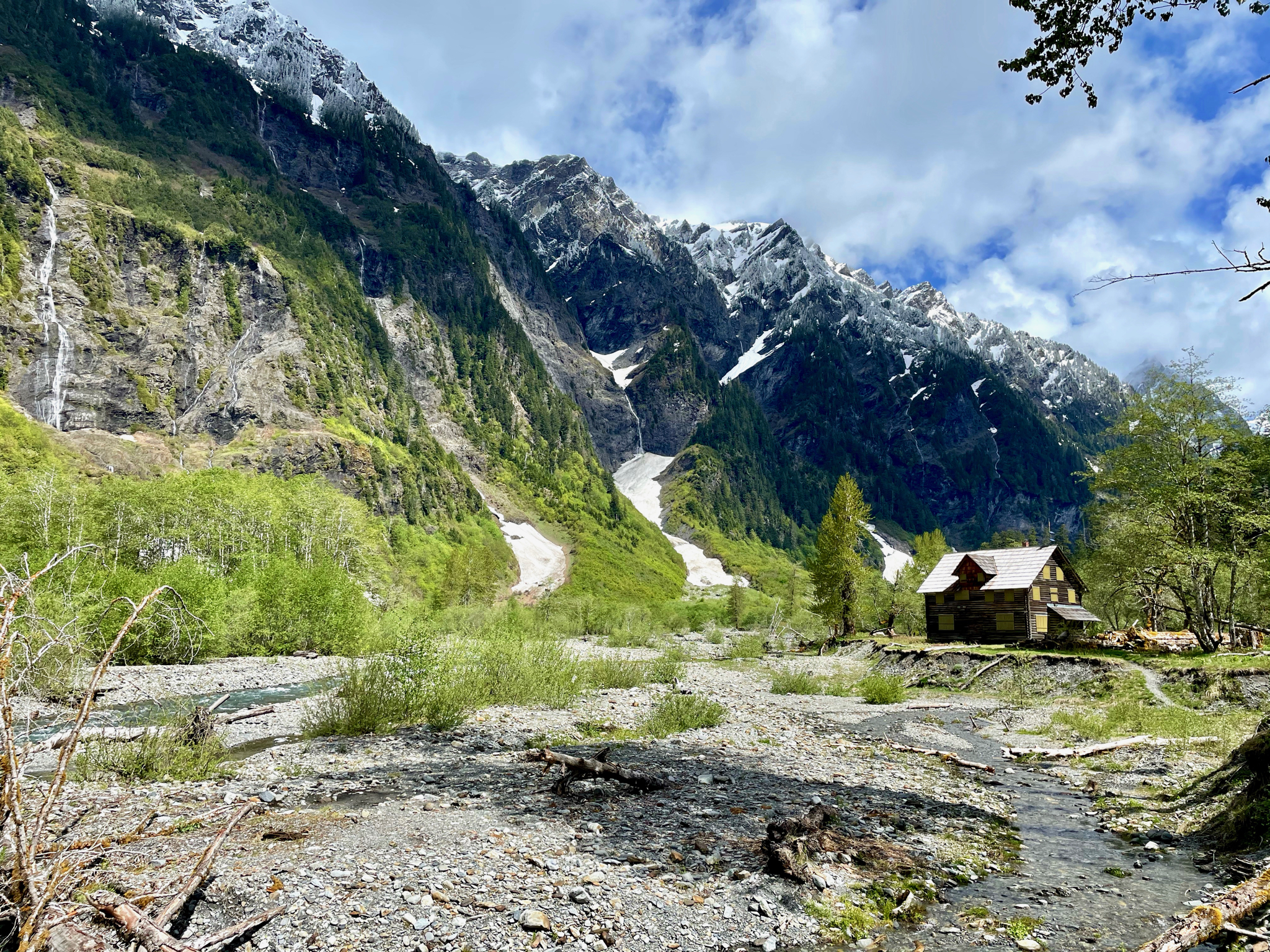 So yeah. We had lunch there on the porch of the ol’ ranger cabin. While there, it started raining again — hadn’t rained all day to that point — and it then kept raining for the next 18 hours. There was a lot of rain as I recall. The valley is gorgeous, and, again, the photos can’t do it justice. Or maybe they just don’t want to. Hard to say.

Here’s one more photo from the valley. It’s an out house with waterfalls. 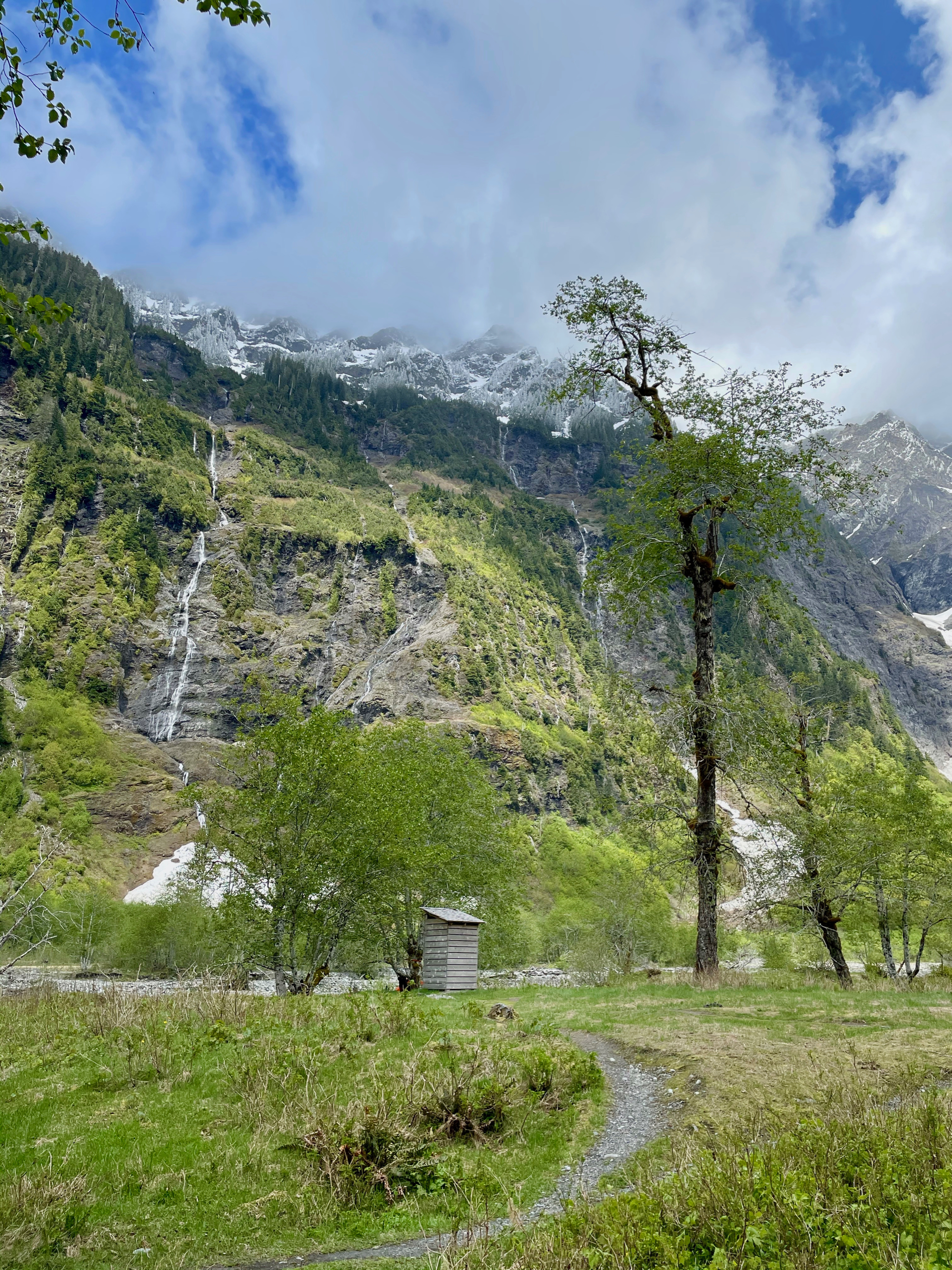 And then, the next morning, we headed on out. It was still green, but weirdly sunny. 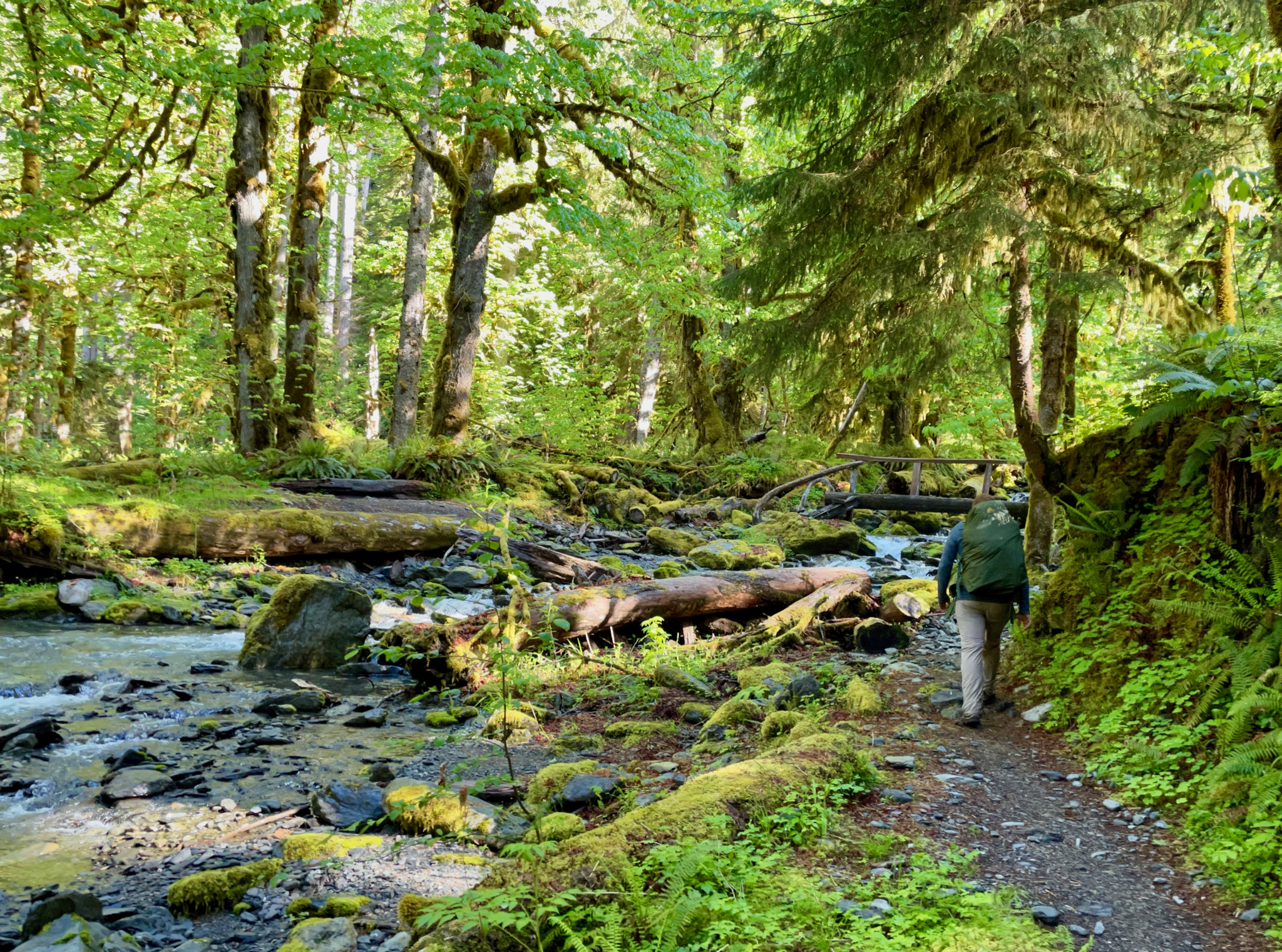 And, on the way back, I managed to take a couple photos at the Pony Bridge and its gorge. Which was cool. 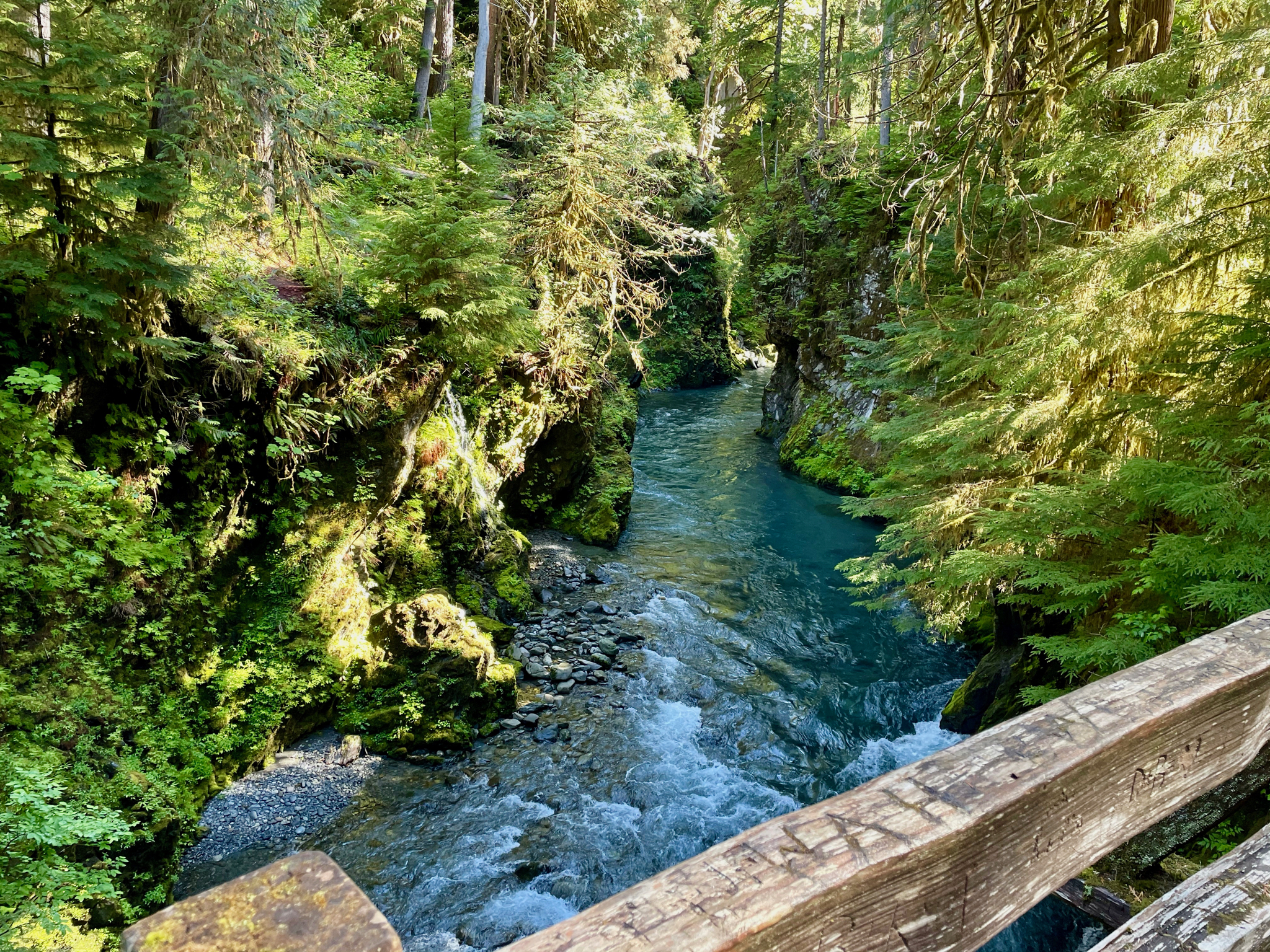 I guess. I dunno. Was it cool? I love the color of the river there. And in other photos. It is my spirit-color. I mean: 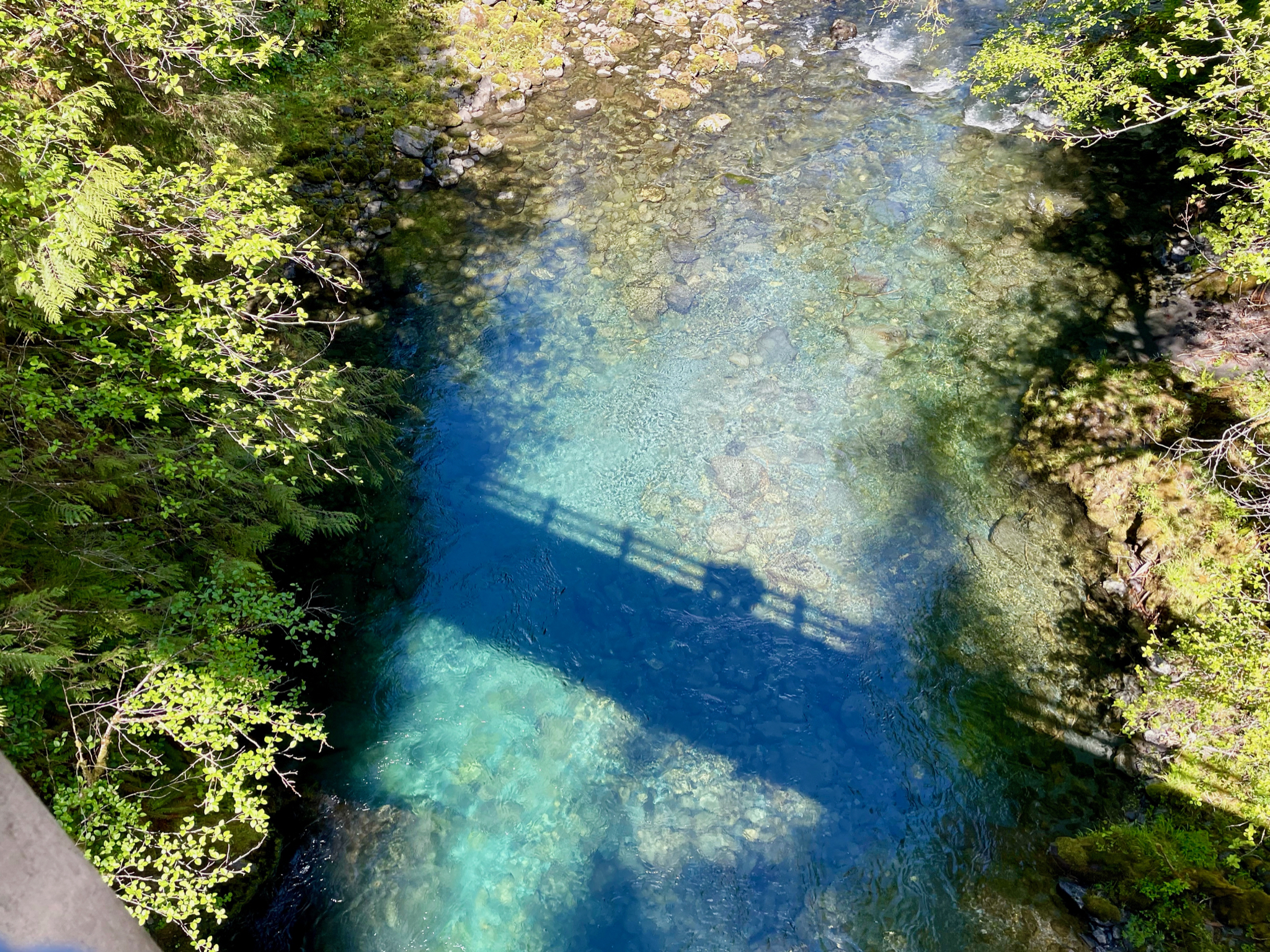 * I’ll eventually change the title to “Heart of Dampness: Hiking the Quinault River Trail to Enchanted Valley”. It’ll be better for SEO, plus who doesn’t love a Joseph Conrad reference? Probably everybody. I do like how the current title sounds like a Modest Mouse song/album title. 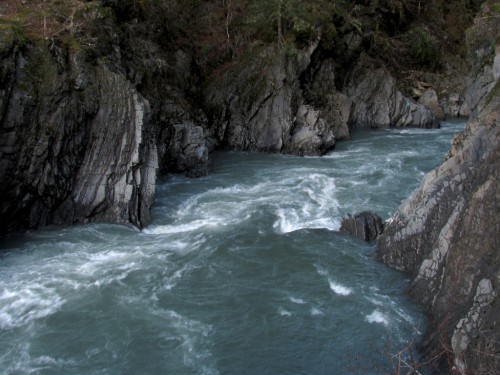 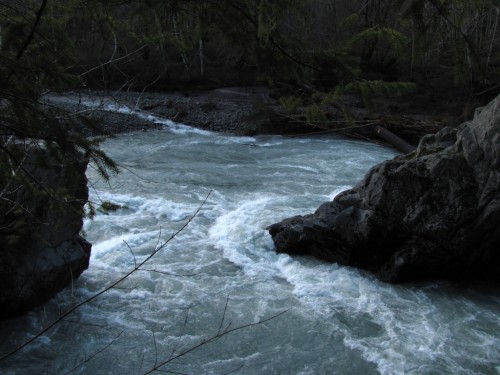 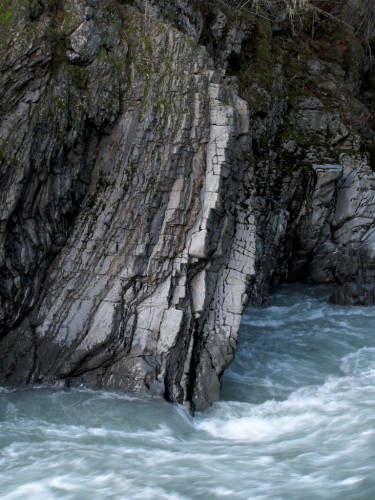 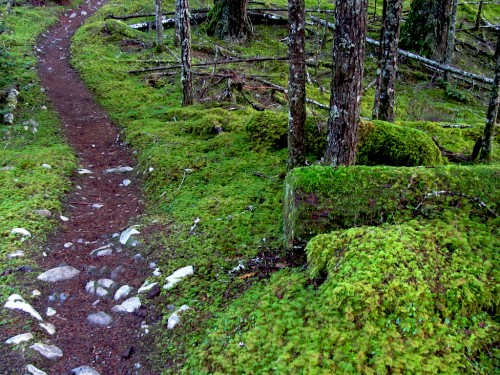 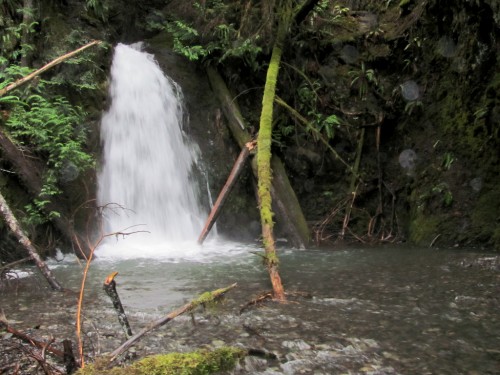