On the way to SoUT and then coming back again, met up with Terry and Claire and did some stuff. Verzeihung. The muse escapes me. These are just words. This is just a paragraph.

We went and had sliders at a restaurant at River Bottoms. They looked like this: 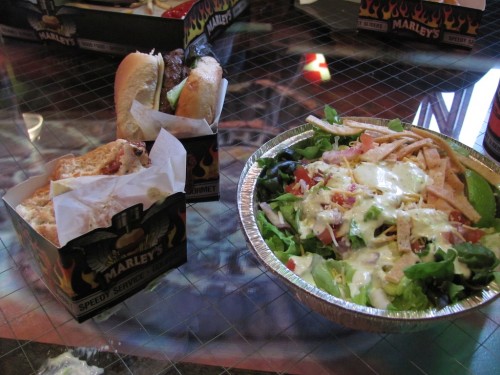 The thing on the right is not a slider. And the thing at the bottom left is just ranch dressing, but if you want to tell yourself that a bird flew into the restaurant and had a near miss with my dinner, more power to you. Or maybe less since you’ll be self-deceived, although there is a lot of power in self-deceit. Maybe in this case it would be a wash. The tri-tip burger (or filet burger?) was pretty special, although the chicken-ranch burger has nothing of which to be ashamed (other than being somewhat effeminate, not that there’s anything wrong with that).

As part of its branding, River Bottoms has installed the tallest speed bumps in all of Utah County. They also have an indoor surfing pool there. Here I am catching a big, dry wave: 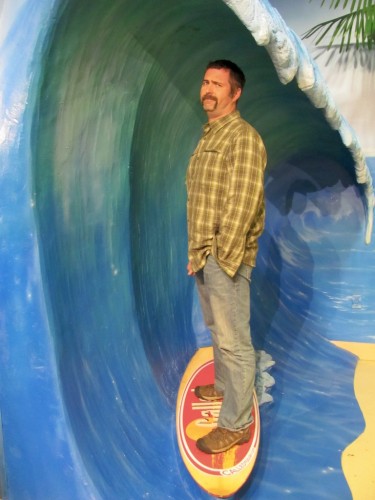 And then this is Terry and Claire enjoying the kind of anonymity that can only be afforded a couple by insufficient-light photography: 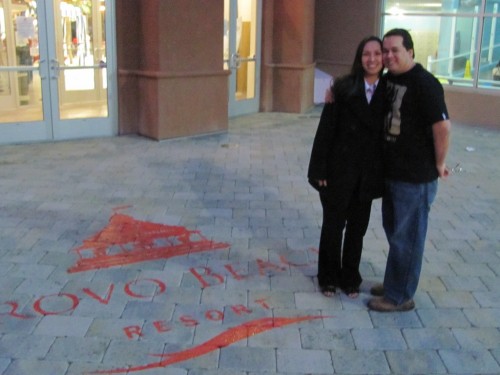 And it occurs to me that if not for Facebook, I would have no idea how to spell Claire’s name. I mean, I’d have an idea, just that it would be the wrong idea.

We later went to the grocery store, where I was impressed by this aisle: 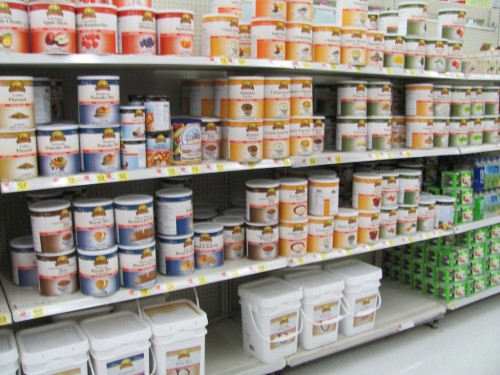 I’m not sure why grocery stores in western Pennsylvania *wouldn’t* carry five-gallon paint buckets full of corn meal, I just know that they don’t.

Then on the way down to southern Utah, I stopped at Carl’s Jr. in Fillmore. It was kind of a bad Carl’s, though: not enough barbecue sauce on the Western Cheeseburger, over-toasted bun, and whatever the ranch dressing was that they gave me for my criss-cut fries, it wasn’t Carl’s in-house dressing and, accordingly, sucked. So I’m not showing pictures of that particular Carl’s Jr. as it appears to be of an apostate strain. May its misdeeds soon be repaid in the hellfires of franchise license eradication. Amen.

After coming back from SoUT, met up with Terry again and went shooting in Orem with him and the scouts or deacons. I’m not sure whether they were acting as scouts or deacons that night. No one was wearing a neckerchief, but then no one was passing the sacrament either. Maybe they were just 12-year-olds with handguns.

And then I went golfing with Garry, Beth, and Caitlin. 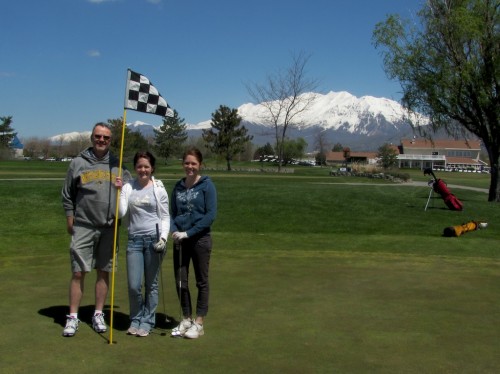 They are dutiful posers (in the sense that they pose dutifully). I only picked up on one hole. More importantly, Garry found Dunmore chocolate donuts (and brought me one). For them alone it would be worth a trip to Utah (although they require hunting down among the gas stations and grocery stores). Seriously the best donut ever, and I don’t say that lightly. But, no, I didn’t take a picture.

These are also just words.