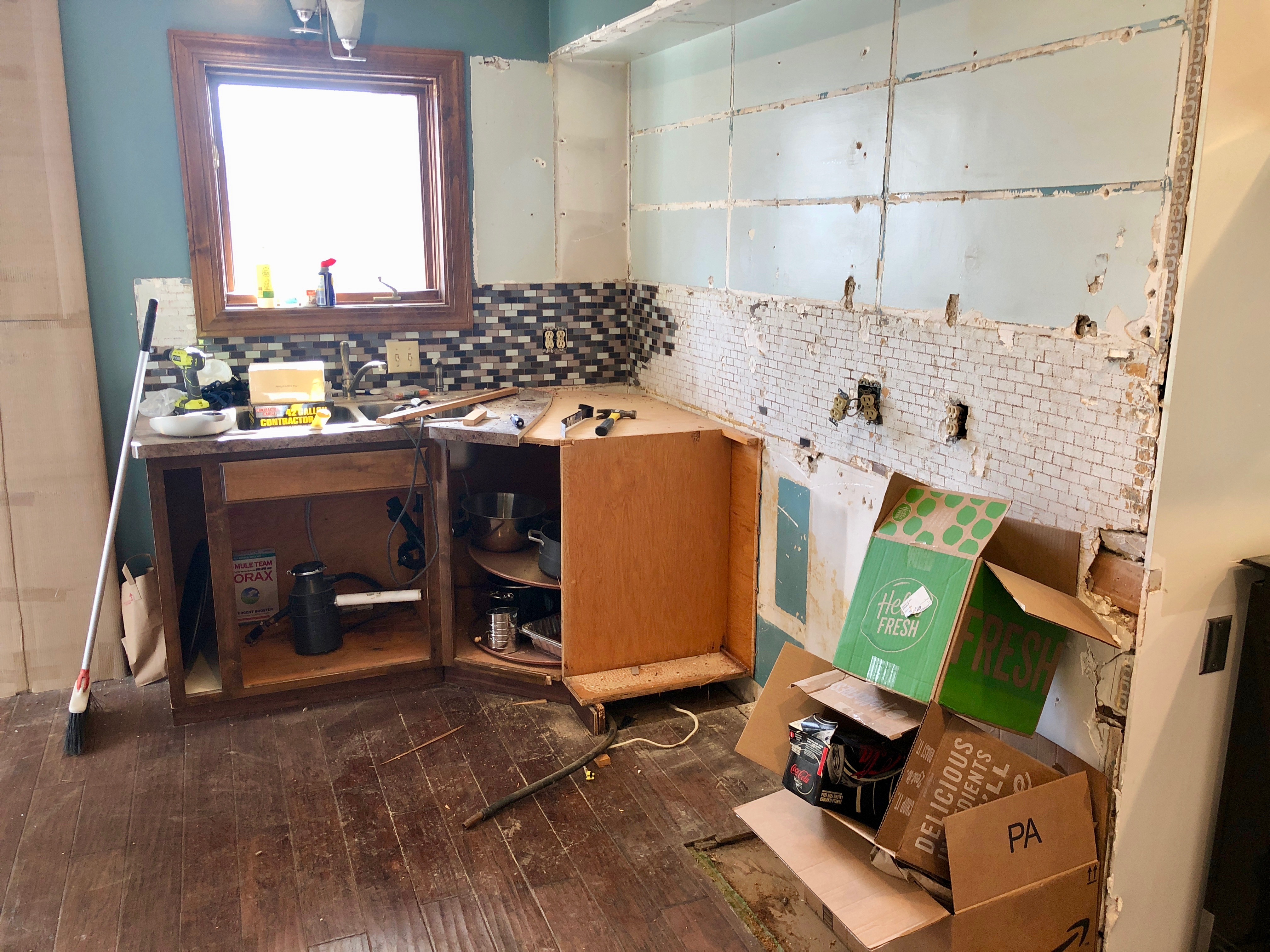 They were always going to slow down once school started back up. And then there’s this weird thing that happens to me about the middle of October every school year where I just can’t do anything but deal with school and wait for it to be over. Which it isn’t until April (well — there’s a reprieve in December).

In “September”, with the kitchen functional-ish, it was finally time to start revising the space that used to be the kitchen. In its place was going to be a pantry cabinet, a “mud room”, a laundry room, and some more kitchen cabinets and counter space. But it was all still just going to be in one room.

Took all the doors off the old cabinets and for some reason the Re-Store seemed happy to take them.

I felt a little bad about taking these old cabinets out, since it turned out that my electrician’s uncle, who’s also in my ward, put these up a mere 30 years ago. Sometimes Cache Valley is a very small town.

The cabinets weren’t the discrete boxes with doors that I expected them to be, but rather were kind of like a plywood grid system attached to the wall. That probably made them a little harder to take out than they otherwise would have been and probably spoke to a certain level of craftsmanship.

I think Dan, who hung these older cabinets, is disappointed with me for replacing them with MDF. It’s hard to keep secrets in a small town. (I’m sure Dan’s fine, I’m just off the Christmas card list.)

Once that side was done, it looked like this:

There was so much cardboard in my house for so many months.

It bothered one of the electricians that the switch to the old ceiling fan was in the middle of the wall rather than next to the light switch (the old configuration is shown above). Again, I like to encourage that kind of OCD, which resulted in some cutting of drywall, which then revealed this fun splice:

Pictured: wires spliced together inside the wall (and not accessible) and the wires then wrapped up in electrical tape (rather than wire nuts). I’m sure it was easier that way, and why not take the easy route, right?

Also, though, the electricians convinced me to keep the ceiling fan in the mud room even though it wasn’t over the stove any more. It looks cool, gives it sort of a period vibe. It also vents straight into the attic, which…

Then for some reason I stopped worrying about demolition and put trim around the new window.

Please don’t ask what the outside of this window looks like. I got a guy coming for that. Soonish.

Then, some time in October I decided that I could get rid of all the demolished wood and stuff by burning it all in my backyard fire pit (if only I had a backyard fire pit). So I bought a little fire ring and…

…And determined that that’s not going to work out. I’ll just give in and get a dumpster some time.

Then, later in October, I started pulling out the cabinets on the other side of the room as well as taking out the tiny glass tile backsplash.

And then, that was it. I’m pretty sure I put up the pantry cabinet somewhere during this time period (not pictured). Also, I think the plumbers came back some time in November maybe? to take out the old sink drain and install pipes for the washing machine (and the vent for the dryer). I dunno, that could’ve been January.

Just one more of these and then I’m going to be done talking about this kitchen project. It’s taken forever. It is a major relief that the project is mostly done now and to no longer be surrounded by cardboard, dust, and chaos. I don’t ever need to renovate anything again in this lifetime. Please do not ask me to renovate anything for you.